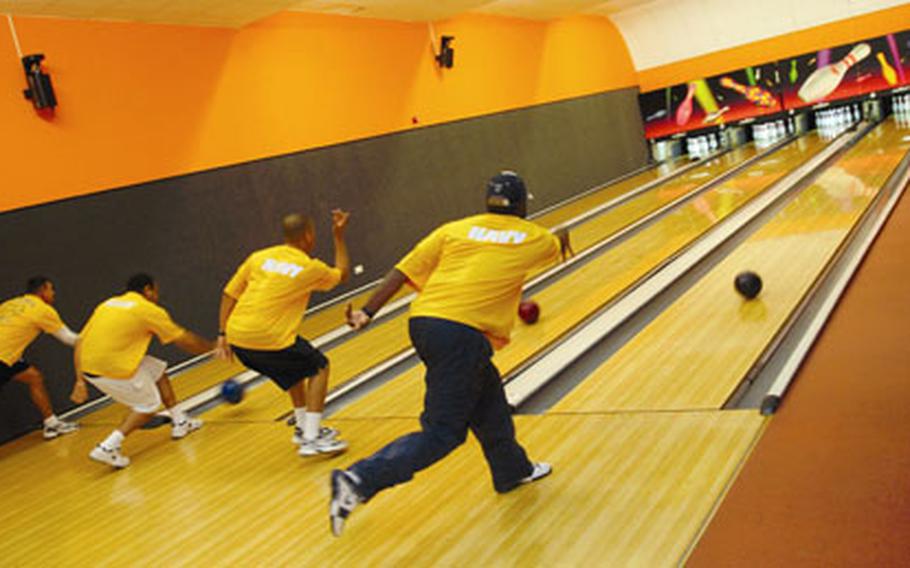 Sailors at the Joint Maritime Facility at RAF St. Mawgan in Cornwall bowl as part of a command-wide group exercise program. They meet three times a week for various physical activities. (Photo Courtesy of U.S. Navy)

In 2007, more than 10 percent of the 130 U.S. sailors stationed at the Joint Maritime Facility at St. Mawgan were in danger of failing to meet Navy standards for physical training and body fat ratios.

So, as the command fitness leader, Chief Petty Officer Shawn Reece wracked his brain for a way to balance the scales and potentially save a few sailors from getting the boot from the military for not meeting the criteria.

In the end, the solution was fairly simple, said Reece, who managed to bring the unit&#8217;s numbers to within 99.9 percent of its goals over the course of the past year. His trick? Group exercise.

There seems to be a resurgence in group physical training across the services, and Reece thought it deserved a try. And so began his "Reign of Terror" &#8212; a term sailors around the installation have jokingly used to describe the thrice weekly workouts.

Before the group exercise push, "I was happy to be one of those people who just got by. Now it&#8217;s more enjoyable because I don&#8217;t struggle," said Petty Officer 2nd Class Crystal Holmes, 25, a culinary specialist.

"We keep each other motivated," she said, echoing the philosophy that drove Reece toward the group effort.

Only 5 percent of the unit were singled out for less-than-stellar physical performance or above-average body fat rates, as of the last official test last spring &#8212; a standard battery of jogging, sit-ups and push-ups.

"And we&#8217;re still improving every day," said Reece, who keeps a detailed record of each sailor and his or her weekly progress.

From circuit training to aerobics, the sailors at the JMF have done it all. (Reece said aerobics was considered a joke by many sailors until their skepticism was replaced by profuse sweating and wobbly legs from the "girly" workouts.)

Along with the group approach, his organization and willingness to get feedback from the sailors, Reece also said getting the commander, Capt. John Jones, to the workouts has helped fuel their success.