Mildenhall&#39;s Matt Shrull (white jersey) collides with Ramstein&#39;s Greg Posada as they fight for control of the ball during the men&#39;s final. (Sean Kimmons / S&S)

Mildenhall&#39;s Matt Shrull (white jersey) collides with Ramstein&#39;s Greg Posada as they fight for control of the ball during the men&#39;s final. (Sean Kimmons / S&S) 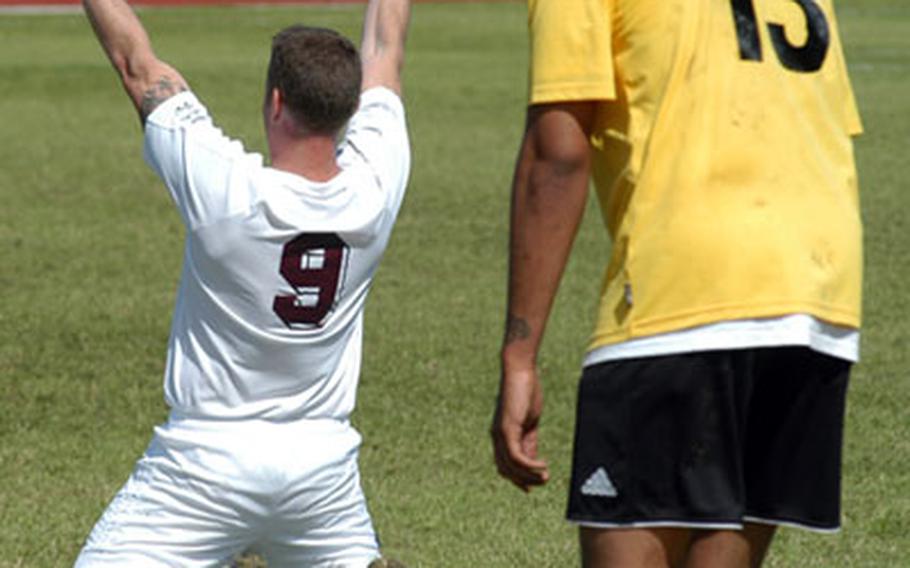 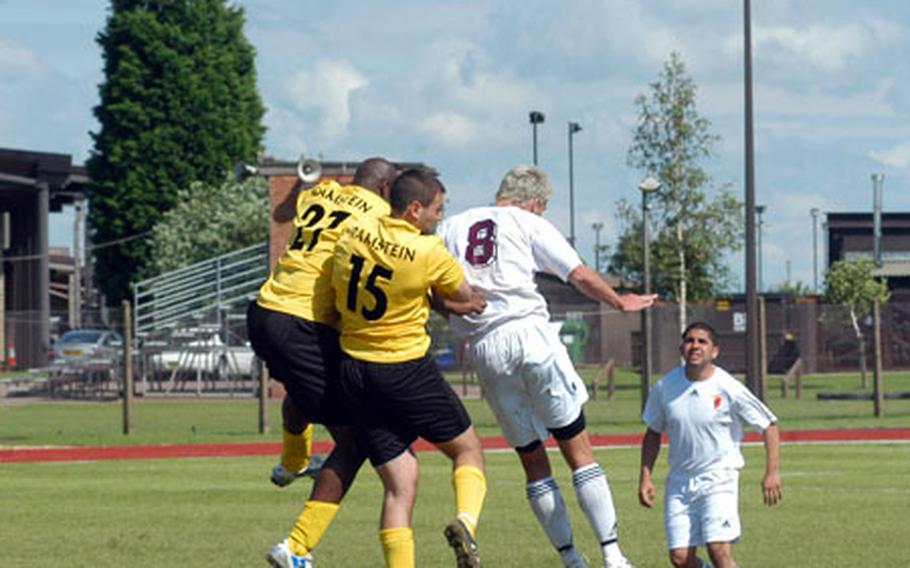 Mildenhall&#39;s Brian Liston-Clark (8) goes up for a header against two Ramstein players in the men&#39;s final. (Sean Kimmons / S&S)

RAF ALCONBURY &#8212; A year after the Lakenheath Eagles took home the men&#8217;s first-place trophy in the U.S. Air Forces in Europe soccer tournament, nearby rivals at Mildenhall have done the same.

On the women&#8217;s side, the Ramstein Lady Rams dominated over the other two teams from Spangdahlem and Lakenheath by concluding the five-day tournament with five wins, no losses and one tie.

The Lady Rams pounded the Spangdahlem Lady Sabres, 4-0, in a wet and muddy women&#8217;s final played earlier on Friday.

The men&#8217;s defending champs from Lakenheath (2-3) had a slightly better performance than the women, who only scored one goal in all five of their losses in the tourney. The Lakenheath men dropped two games, including a semi-finals match, against their local adversaries from Mildenhall.

&#8220;Them being our next-door neighbors and a rival, it&#8217;s always a good feeling,&#8221; Mildenhall striker Tom Faust said about beating Lakenheath twice in the tourney.

On the other hand, Faust, an electronic warfare officer with the 7th Special Operations Squadron, admitted that the Lakenheath team didn&#8217;t have the same players it had in its championship run last year.

One of those players was British striker Brian Liston-Clark who jumped ship from the Lakenheath team to bring his scoring prowess to Mildenhall this year.

Liston-Clark, who made the tourney&#8217;s all-star squad, scored two close-range goals in the men&#8217;s final against Ramstein. Following the final, he said that being on both American teams proved to be a valuable learning experience.

&#8220;It&#8217;s good to play for two different teams. They definitely have more experience in the game,&#8221; the 19-year- old dependent said about his American counterparts.

Besides the addition of the British scoring machine, Mildenhall coach and midfielder Scott Reed credited this year&#8217;s success to the commitment of the team, which has only been together for the past three months.

&#8220;I demand dedication. That&#8217;s been our thing the whole time,&#8221; said Reed, who added that his players had to purchase their own uniforms and overcome the lack of competition and a gauntlet of practices while scrounging for fields to play on.

In the playbook, it was Mildenhall&#8217;s ability to transition from defense to offense that had them rolling over opponents, Faust said.

&#8220;We exploited that several times. The two times we played Ramstein they didn&#8217;t get back with enough and we attacked that and made them pay for it,&#8221; said Faust, who scored the fourth goal in the men&#8217;s final on a quick transition play.

Although Mildenhall may have made it look easy out on the pitch with their lopsided victories, Faust promptly disagreed that it was.