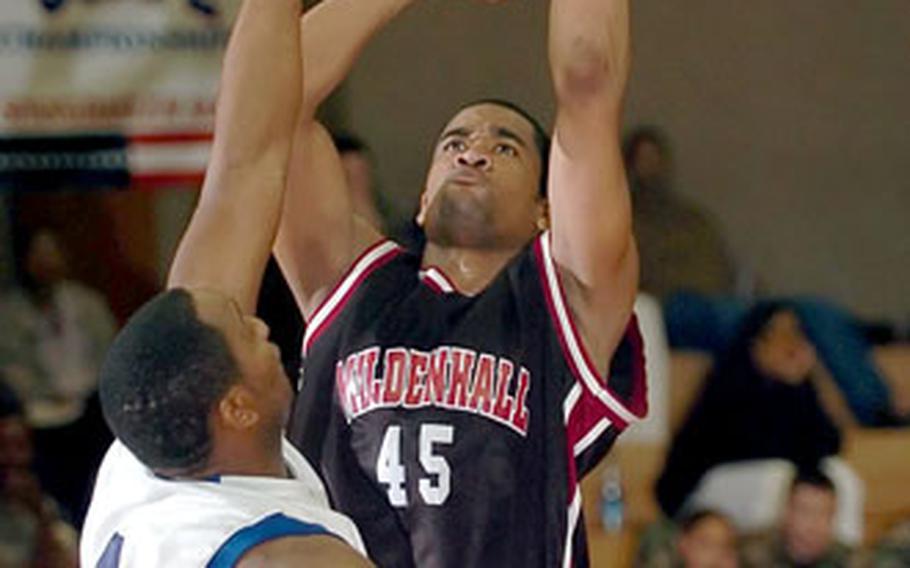 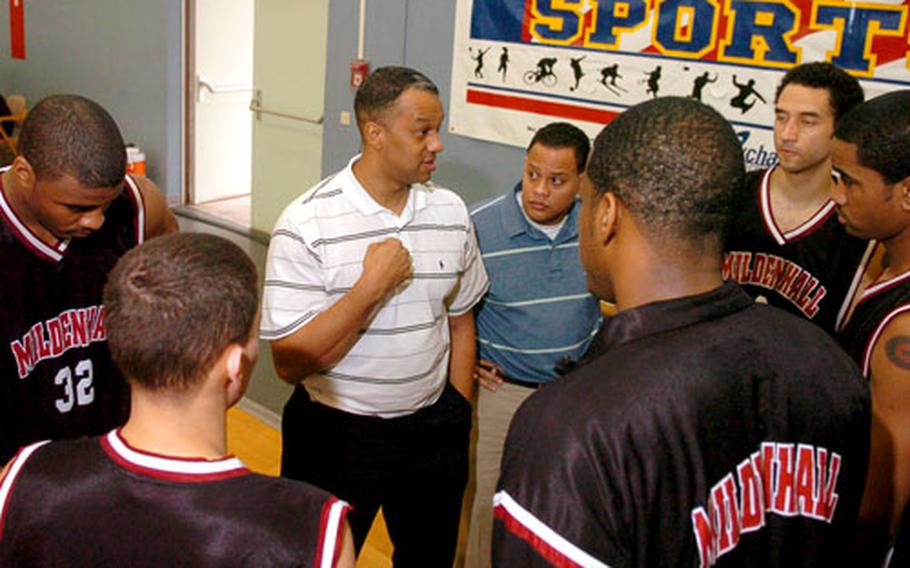 Basketball stars from RAF Mildenhall often feel like they play the sport in a vacuum.

Top players nearly always find themselves either facing off with members of their own team or matched up against familiar cross-town rivals from Lakenheath or Alconbury.

When placed on a Europe-wide stage, then, both the men&#8217;s and women&#8217;s teams often face a level of uncertainty about their abilities, players and coaches said. They&#8217;re good, they know, but are they just big fish in small, English pond?

The answer, announced last month at the U.S. Air Forces in Europe basketball championships, was a resounding &#8220;no,&#8221; as the men claimed the Air Force title and the women earned second place behind Ramstein.

Last weekend, the two teams kept up the tournament push in the U.S. Forces Europe championship, where the men brought home second, falling in the final round to Wiesbaden, while the women bowed out in early play to squads from Kitzingen and Ramstein.

For the men, the two tournaments have been an emergence of sorts into the European elite &#8212; no men&#8217;s team from the local base has captured the USAFE title in recent memory, according to the coach and players, who spoke by telephone from Vogelweh, Germany, where they were staying before last week&#8217;s championships.

For the women, the tournaments have been more of a re-emergence. Last year the Lady Marauders brought home both the USAFE and the Army-Air Force trophies, and had hoped to defend both this season.

The repeat wasn&#8217;t to be; Ramstein clipped the team 63-55 at the USAFE level. The squad was without center Sybil Reed in the Air Force tournament, an asset in the paint they would put to use in the Army-Air Force brackets.

Prior to last weekend&#8217;s play, the women decided to up the tempo of their game, attempting to push hard in the early minutes instead of allowing themselves to stick by their normal tactic of gradually developing a rhythm, Rodriguez said. A 20-minute running clock in the Army-Air Force didn&#8217;t allow them that luxury, she said.

On the men&#8217;s side, the Marauders drew from a deep well of experience to put up a championship team this year, players said.

As a rule, the team normally likes to run the floor, then pull into a tight zone on the defensive end, a strategy that served them well at USAFE, said Capt. Reggie Minton, who averaged about 25 points per game in that tournament.

Collectively, the team shot an impressive 49 percent from the floor in the earlier tournament and hauled down an average of 27 rebounds per game, according to assistant coach Ricardo Perez.

Before the Army-Air Force championships, the men were wary about their pace, since teams were to play two games per day. The Marauders&#8217; loss to Aviano at the USAFE tournament came on their only two-game day in that bracket.

Both Fletcher and Minton said that they didn&#8217;t see themselves as a dark horse in the tournament.