Menwith Hill running back LaShawn Adams enjoys room to run on one of his 12 carries for 155 yards Saturday against the Alconbury Dragons. (Bryan Mitchell / S&S)

Menwith Hill running back LaShawn Adams enjoys room to run on one of his 12 carries for 155 yards Saturday against the Alconbury Dragons. (Bryan Mitchell / S&S) 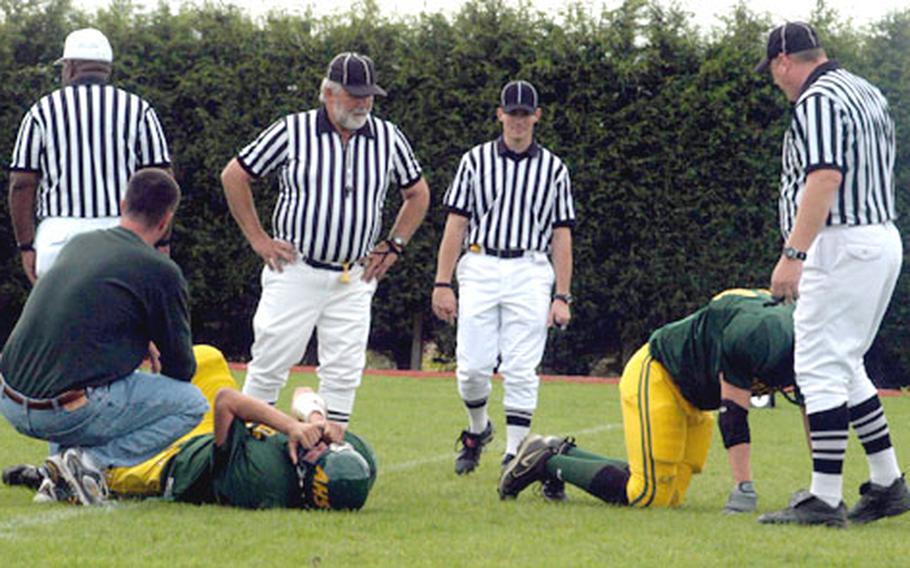 The dominant Mustang offense sent Alconbury coaches rushing onto the field to attend to injured players more than once in Saturday&#39;s contest. (Bryan Mitchell / S&S)

The senior quarterback started the game behind center and quickly led the Mustangs down the field on touchdown-scoring drives that put the game against the Dragons away early. He also led the defense from his linebacker position with four tackles and a fumble recovery on the way to a 36-8 win over the Dragons.

And it was Adams who laid waste to most of the early yardage, racking up 155 yards on 12 carries on his way to scoring two touchdowns. After the game, the powerful but agile runner gave all the credit to the boys up front.

Indeed, the front five graciously opened huge holes all afternoon, allowing five Mustangs to gain more than 50 yards apiece on the ground, and four to come near or top 100.

But it was the early play of Kaaihue, as well as his leadership at linebacker, and Adams&#8217; running prowess that set the tone for Alconbury&#8217;s long afternoon.

Kaaihue, for his part, knows his success lies in the strength of his teammates, especially Adams.

Both players and the coach soaked up the momentarily bliss of winning the team&#8217;s first game of the year after two rough opening tilts. But it&#8217;s just that, momentary.

The Mustangs will take their momentum home this week against the London Central Bobcats for the Menwith Hill homecoming game.

Alconbury, which fell to 0-3 on the season, also is celebrating its homecoming game this Saturday with a game in Cambridgeshire against Rota, Spain.