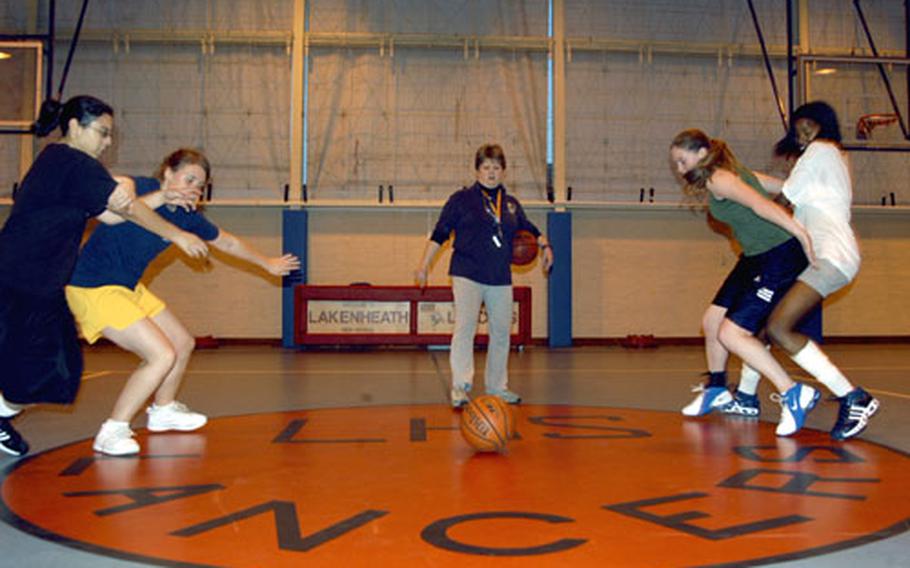 RAF LAKENHEATH &#8212; The four girls basketball teams from DODDS high schools kicked off their seasons this past weekend with games spread across the United Kingdom.

The following is a school-by-school breakdown of players to watch this season:

LakenheathLakenheath returns with a handful of starters from last season&#8217;s squad who should provide much-needed experience and depth.

Coach Janis Ready said she will depend on junior Alex Hampton and sophomore Ann Keenan bring discipline and leadership to the team after strong performances last season. Senior Angelia Gafford will round out the returning starters.

Ready also has promoted two upstart freshmen to the varsity squad. Tekeia Wallace and Erica Turner look to add a spring in the step of the team.

The team started strong last weekend, topping London Central 50-16 in London on Friday and at home 50-31 on Saturday. Wallace scored 17 in the first game and 11 rebounds in the home contest. Gafford scored 10 at London Central and dropped in 15 on Saturday.

AlconburyFirst-year head coach Suzanne Simler has only three returning players on her 11-person roster, but says the team has made tremendous strides since practice opened three weeks ago.

The Lady Dragons will be led by sophomore Caitlyn Stewart, a small forward who can shoot outside, drive to the hoop or create her own shot off the blocks.

The Lady Dragons fell to Cobham 52-17 last weekend, although the squad did score 12 of its 17 points in the fourth quarter. Linda Nguyen led the team with 10 points, including two three-pointers.

London CentralLondon Central starts the season with two returning players from last who will provide experience to a team that includes seven freshmen.

Senior Leah Flake and junior Geena Milho lead a squad short on experience but long on enthusiasm and energy for the game, according to head coach Mark Dix.

In last weekend&#8217;s match against Lakenheath, Geena Milho paced the Lady Bobcats with 21 combined points in both games.

Menwith HillCoach Joann Shipman faces a similar predicament as her colleagues across the United Kingdom: getting the most out of a fairly inexperienced squad.

Senior Danielle Joseph as well as juniors Kayla Kinch and Kimberly Shelton will provide leadership on a team that is building for the future with an eye on success for this season.

&#8220;I expect these new team members will make for a strong team in the next few years. We have three strong and dedicated players to help mentor and to make for a successful basketball season for our Lady Mustangs,&#8221; Shipman said.

The combination worked well last weekend, when the Lady Mustangs squared off against Lakenheath&#8217;s junior varsity squad for two games and left Suffolk with two victories.

Shelton led the Lady Mustangs in the first game with 12 points in the 31-14 game while Kinch paced Menwith Hill with eight points in the second game, which ended at 16-14.