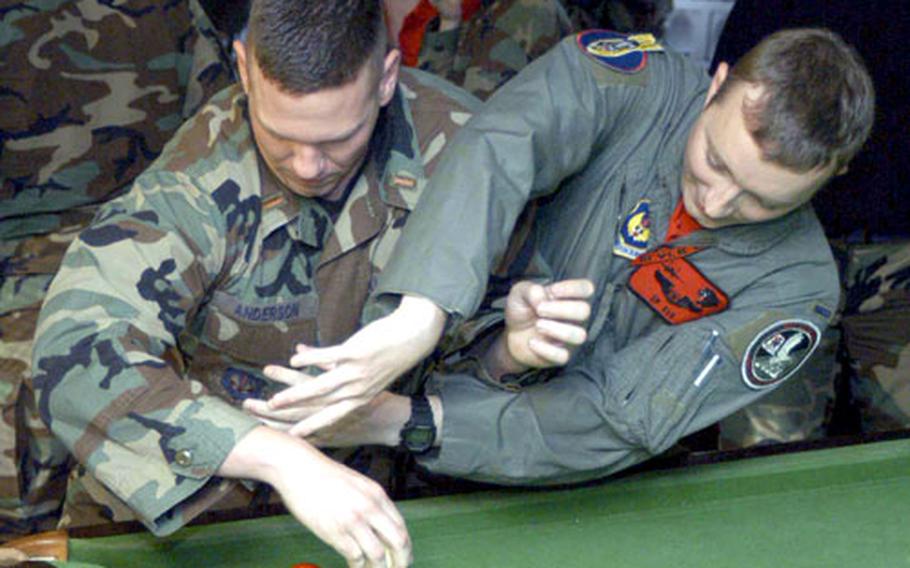 RAF LAKENHEATH &#8212; In the annals of things people do to amuse themselves, there is hardly a shortage of games with strange names and oddball rules (Four-handed pinochle, anyone?).

But among members of the Air Force one relatively obscure game surfaces from time to time in England. Players of this game with names such as Broccoli and The Professor recently met at a tournament at the Lakenheath officers club.

&#8220;We&#8217;re kind of trying to get it restarted here,&#8221; Richards said recently, just before the start of a semi-regular crud tournament at the Eagles Landing club.

For the uninitiated, crud is a game so oddly unique that it scarcely deserves comparison to other sports.

In order to play, participants must pull together two teams of four people each who square off at either end of a pool table set with just two balls, the cue ball and a colored ball.

The opposing player, or receiver, then has to retrieve the cue ball from wherever it is and roll it again to hit the object ball, with two goals in mind &#8212; either to knock the object ball into a pocket or hit it lightly enough that it stops before the next opposing player can retrieve the cue and repeat the process. Teams rotate through their players until one of the two goals is achieved.

If a player does sink a shot, or otherwise prevent the other team from keeping the object ball rolling, the opposing player loses a &#8220;life.&#8221; Lose three lives and you&#8217;re out, and the last team with a member in the game wins.

Theoretically simple, yes, until you start adding in the rules. For instance, shots at the object ball can be taken only from either end of the table, not from the sides, and the next person whose turn it is to shoot can block the current shooter. To block means to plant yourself somewhere at the end of the table and use your body to shield the object or cue ball, often resulting in jarring collisions between players, because contact is allowed.

Distractions are also allowed in the form of waving your hands in front of the shooter&#8217;s eyes or in front of the ball, a practice called &#8220;EMC,&#8221; though Richards said he did not know what the acronym stands for.

Players can also lose a life through almost any egregious breach of crud etiquette or conduct, such as shooting the cue ball off the table, an act referred to as &#8220;gross buffoonery.&#8221;

There are other rules, terms and traditions, but the end result is a surprisingly physical and fast-paced game, played by men and women using call signs (such as &#8220;Broccoli&#8221;) as game names.

But new players are getting tuned into the sport. A group of four U.S. Air Force Academy cadets on a visit to Lakenheath formed one of the teams in the recent tournament, which Richards says he tries to organize quarterly.

The next Lakenheath tournament will likely be in September, he said.