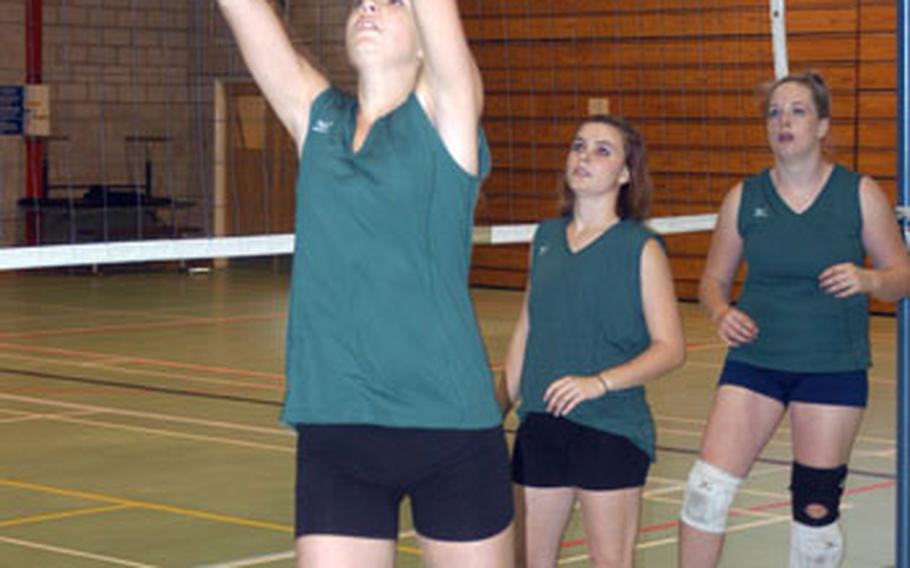 The four U.S. high school girls volleyball teams in the United Kingdom have something in common as they prepare for the upcoming season: They all have new coaches.

In addition, defending DODDS-Europe Division IV champ Alconbury, Division I Lakenheath, Division III London Central and Division IV Menwith Hill are still working on filling out their starting teams with a few returning players and a bunch of newbies in anticipation of their Sept. 16 season-opening jamboree.

This year they will be led by Lea Morris, who directed high school volleyball programs in the States for 12 years before arriving at Alconbury. She&#8217;ll have a mostly new squad with only one returning starter, senior Brianna Smith.

Senior Andrea Starr is also back on the squad, after a knee injury prevented her from playing last year. Sophomore setter Caiti Stewart, who Morris said has &#8220;really good hands,&#8221; also is expected to have a key role.

Morris said practices have been focusing on defense, serving and knowledge of the game.

Lakenheath Lady LancersThe Lady Lancers were seeded fourth in last year&#8217;s Division I tournament, but did not advance from their pool to the final four.

That performance is not one returning players like to talk about. Instead, they&#8217;re looking to improve under new coach Kathy Schick.

Schick hopes the team, behind those experienced players, will finish first or second in the 2006 tournament.

Schick has been involved in volleyball since she was 8. She recently conducted a volleyball camp at Alderson-Broaddus College in West Virginia. She said she plans to teach the Lady Lancers various plays and options, mostly concentrated on the hitter positions.

This year, they will be led by Jeffrey Black, who takes over the squad from six-year coach Susan Payne, who is occupied with her duties as the school librarian.

Black, who just transferred from Okinawa, Japan, where he taught physical education at an elementary school, had his first look at the squad last week.

Luckily, the team has a few returning starters who can help Black prepare the girls for the season ahead. Senior Janet Parker, junior Geena Milho and junior Alyssa Dillon-Wasserman were all varsity members last year.

Black said that he wants a well-balanced team, both offensively and defensively, with good communication on the court.

Menwith Hill Lady MustangsThe Lady Mustangs entered last year&#8217;s Division IV tourney as the No. 3 seed, but did not advance to the final four.

Without a gym in its high school, the team holds practices at the base gym, where new coach Wanda Gardner has been getting her squad of 14 players ready for this season.

Thus far, Gardner has been impressed with the players&#8217; ability to jell as a team. And with only two returning players &#8212; senior Danielle Joseph and junior Kathryn Brew &#8212; that seems to be quite a feat.

Gardner played volleyball in high school, but is new to coaching. She relies on two assistant coaches from the men&#8217;s base volleyball team to help out, she said.

What she expects from her squad this season is for them to enjoy the game and to play confidently. If they can do that, there&#8217;s no reason that they can&#8217;t do better this year, she said.