Sports: New challenges on the court 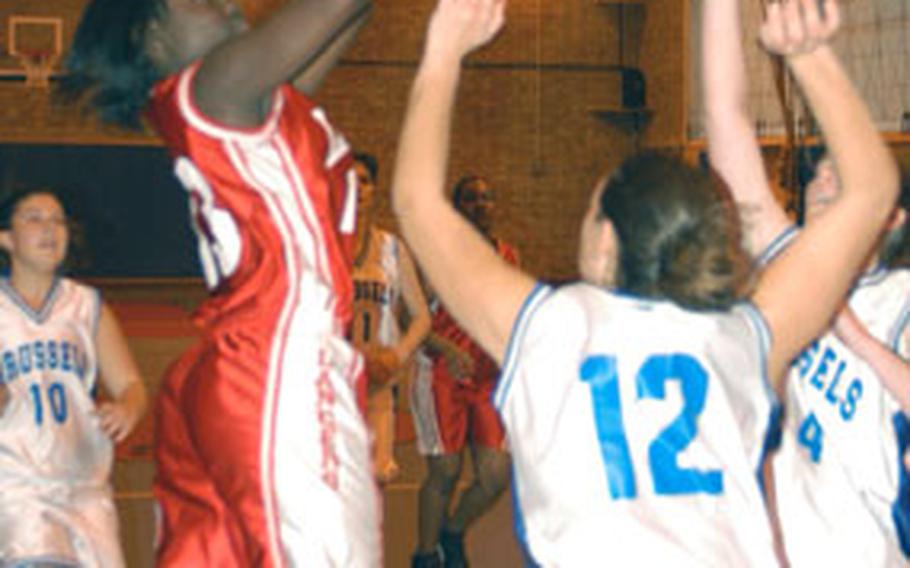 Tekeia Wallace goes up for two of her seven points in the Lady Lancers&#39; two-point home win over Brussels on Saturday. (Bryan Mitchell / S&S)

The weather&#8217;s turned nasty and the Christmas lights have been put up. That means it&#8217;s time to head indoors for sporting action.

Girls basketball teams across England are hoping to make their mark this season despite a revamped scheduling format that will create tougher match-ups for smaller schools.

Alconbury Lady DragonsThe Lady Dragons figure to have one of the toughest schedules in recent memory, thanks to a change that will see teams play more games against regional foes than teams within the same division.

But head coach Mark Dix is still confident his squad can stay competitive.

The team opened the season with a five-point win against Hillingdon, a British school, before taking on SHAPE in a doubleheader last weekend. Alconbury dropped both games to SHAPE, 45-6 in the first and 46-7 in the second.

A pair of juniors will lead the Lady Dragons this season. Center/forward Caitlin Stewart started the season strong with an 18-point, 12-rebound, five-steal performance against Hillingdon.

Lakenheath Lady LancersLakenheath opened the season this past weekend with two close wins at home against Brussels. The final scores were 31-30 in the first game and 35-33 in the second.

But the Lady Lancers are a young team that will have to grow up quickly this season to stay competitive with the Germany-based Division I foes.

&#8220;We have three returning starters from last year and one other varsity player but everyone else is coming up from JV or new,&#8221; head coach Janis Ready wrote to Stars and Stripes in an e-mail.

The Lady Lancers travel to the International School of Brussels this weekend.

Menwith Hill Lady MustangsThe Lady Mustangs started the season with two tough losses to the ISB. The squad fell to ISB by nine points on Friday, but played a closer game on Saturday before falling 25-19.

Lady Mustang Kim Shelton led the team with six points on Friday and dropped in another 13 on Saturday.

Stars and Stripes was unable to reach the coach last week for comment.