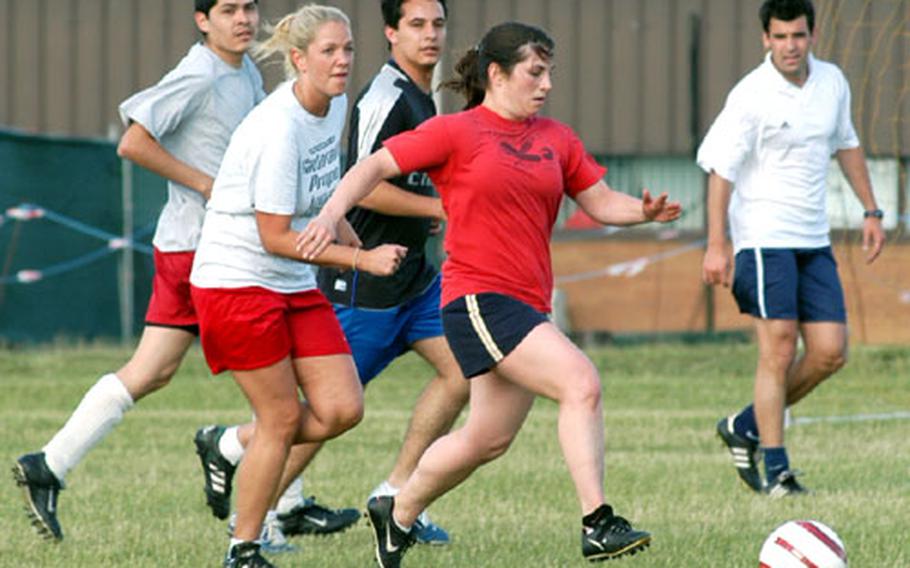 Staff Sgt. Nancy Wall, of the 48th Aerospace Medical Squadron, keeps control of a soccer ball during a scrimmage behind Lakenheath High School. Wall and other members of a women’s soccer team are looking for more players to add to the team’s roster. (Sean Kimmons / S&S)

The goal of the soccer team &#8212; better known as a football team outside the States &#8212; is to compete in the U.S. Air Forces in Europe Soccer Tournament in October. Last year, the two-base team finished third in the tourney.

As members train for the next tourney, which will be held in Germany, they&#8217;re looking to test their skills against British women squads and whoever else wants a piece of them.

Unfortunately, the women&#8217;s squad is lacking the players to fill out its roster. The team is looking to get at least 16 players. Now, there are five players on the team and a few random players that show up to their practices.

Staff Sgt. Sheree Dickover, a central defender, played in the first USAFE women&#8217;s soccer tournament in 2003 and would like to see the competition continue for the team.

Another player on the team, Airman 1st Class Jennifer Puff, feels that they could be worthy opponents, especially if more players participate in their practices.

Female players interested in joining the team can contact Puff at 226-8468 or drop her an e-mail at jennifer.puff@lakenheath.af.mil.