Sports: Mildenhall rugby team has many Americans on the squad, but its looking for more 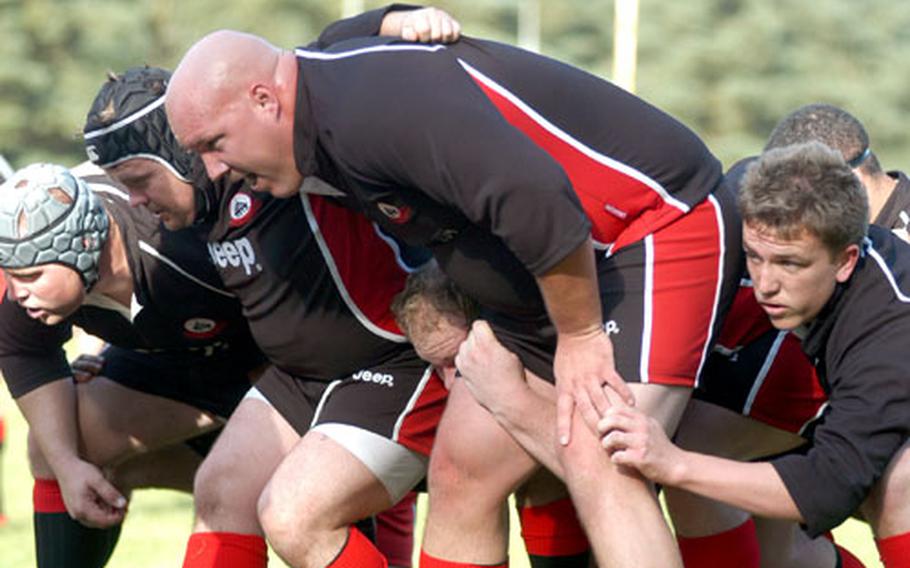 Mildenhall rugby players line up for a scrum in a friendly match against Thetford. (Sean Kimmons / S&S)

Mildenhall rugby players line up for a scrum in a friendly match against Thetford. (Sean Kimmons / S&S) 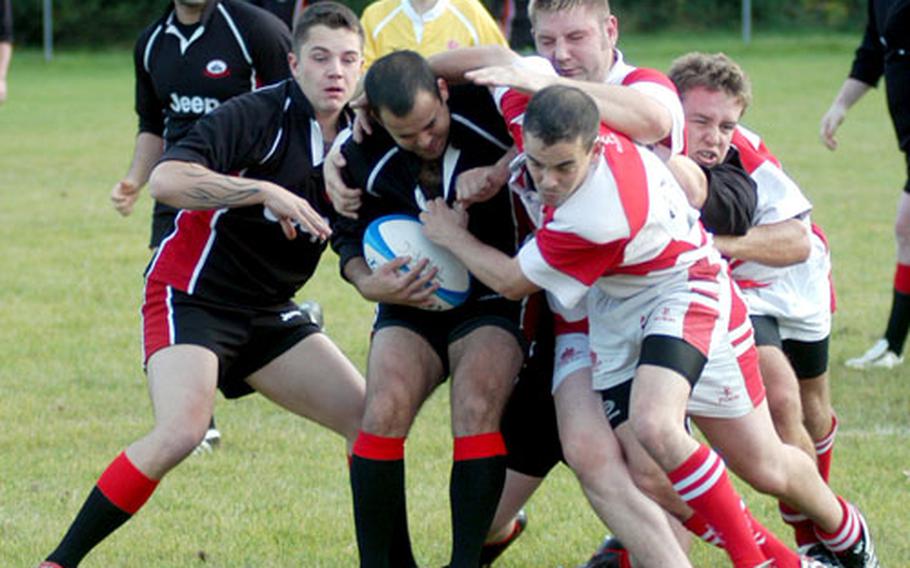 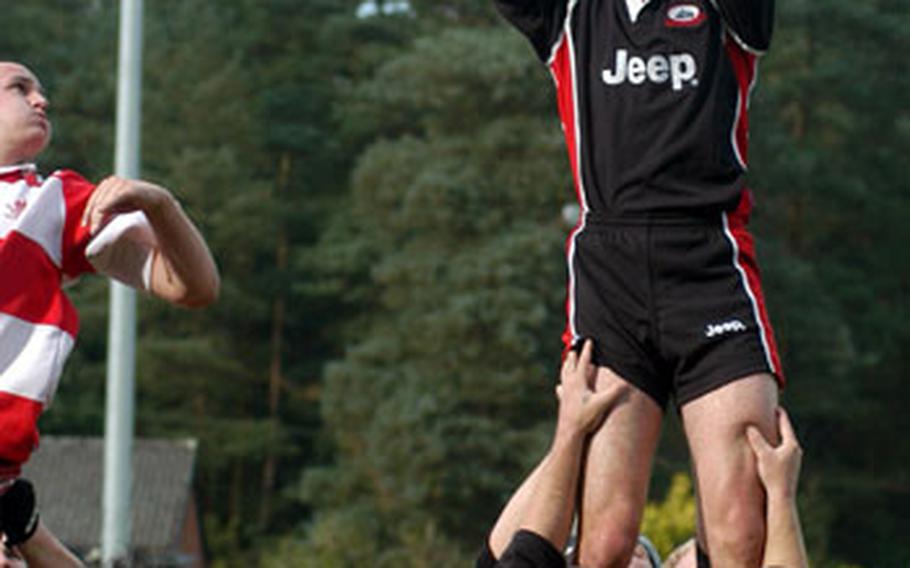 Mildenhall second rower Matt Jones, a British national, attempts to catch a ball during a lineout play in a friendly match against Thetford. (Sean Kimmons / S&S) 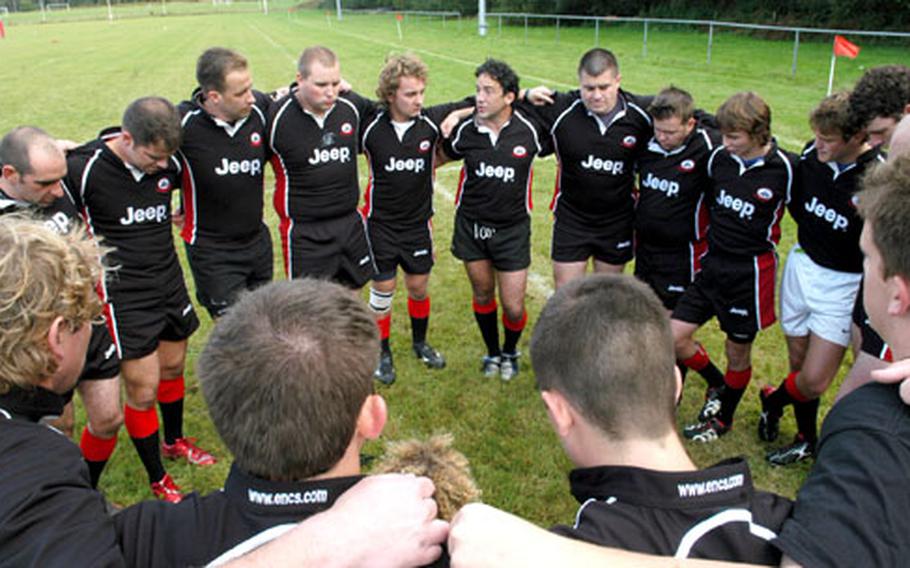 Members of the Mildenhall rugby squad come together for a motivational speech before a recent friendly match against Thetford. (Sean Kimmons / S&S) 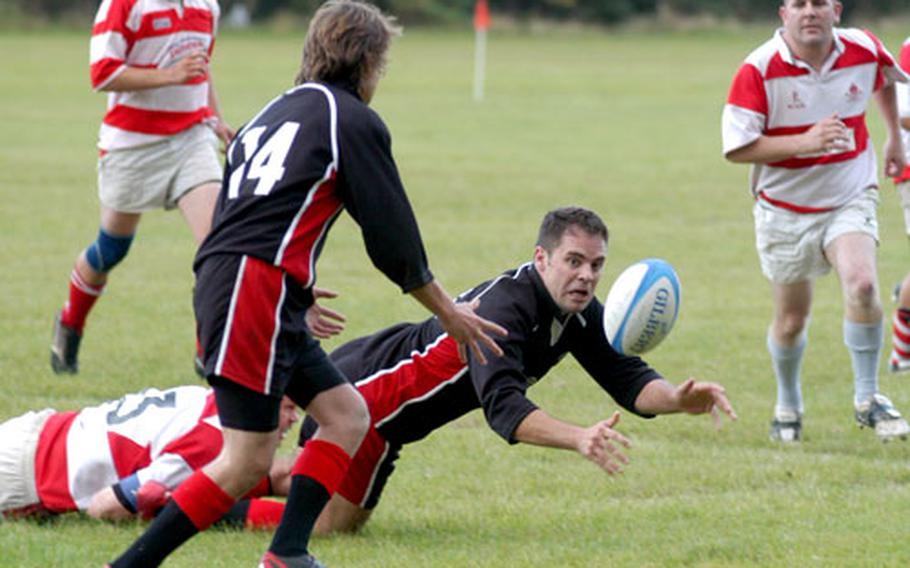 In the midst of getting tackled, Ryan Bloom, a member of the 48th Aircraft Maintenance Squadron, flicks off a pass to Matt Tarver, a British national, in a friendly match against Thetford. (Sean Kimmons / S&S)

THETFORD &#8212; Dave DeLozier doesn&#8217;t deny that he&#8217;s a computer geek, since he spends most of his weekdays fiddling with the workstations as part of his job at the 100th Communications Squadron on RAF Mildenhall.

On Saturdays, it&#8217;s a different story. That&#8217;s when the technical sergeant clocks in to conduct business on a rugby pitch, slamming himself into opponents and clawing for field possession inside hard-hitting scrums.

&#8220;I work as a computer geek and come out here for stress management,&#8221; the stocky prop forward from the Mildenhall Rugby Union Football Club said before a friendly match against a Thetford club on Saturday.

The 70-member Mildenhall club, mostly consisting of U.S. servicemembers, was stood up a few months ago and is currently looking for additional players to build up its club.

This year, however, the new club is in probationary status and has to wait to earn an invite into a local rugby division next season.

To make this happen, the club needs players to bolster its roster so it can form a proper rugby club with more than one team.

Extra players also will come in handy when servicemembers deploy, said Bob John, one of the club&#8217;s coaches. John would like also to see the club expand so it could create youth and women&#8217;s teams as well.

&#8220;We need plenty of numbers so that when guys deploy we got others that can step in and fill in the gap,&#8221; he said during the match, which Mildenhall lost to Thetford, 5-0.

For now, the club&#8217;s players compete against other local squads in friendly matches that provide much needed practice to many of its American players, who are still new to the sport.

&#8220;We&#8217;ve been training for about three months, so now they&#8217;re picking up the skills and learning from their errors&#8221; said John, who added that he invites other unskilled Americans to join the squad and learn from other teammates.

One Mildenhall player with plenty of rugby guidance to dish out is Wayne Kinsel, who also plays on the Air Force rugby team, the reigning champs of last year&#8217;s Armed Forces Rugby Championships.

Craig Hunter, the club&#8217;s director and a flanker on the squad, thought of the idea to start the Mildenhall squad to better accommodate local rugby players.

The initial fee to join the Mildenhall Rugby Union Football Club is 50 pounds, plus 15 pounds a month that includes uniform and social events, among other costs. The squad plays on Saturdays until about April. For more information, contact Rick Cook at rugbynut7@hotmail.com or Craig Hunter at sa.hunter@btinternet.com.