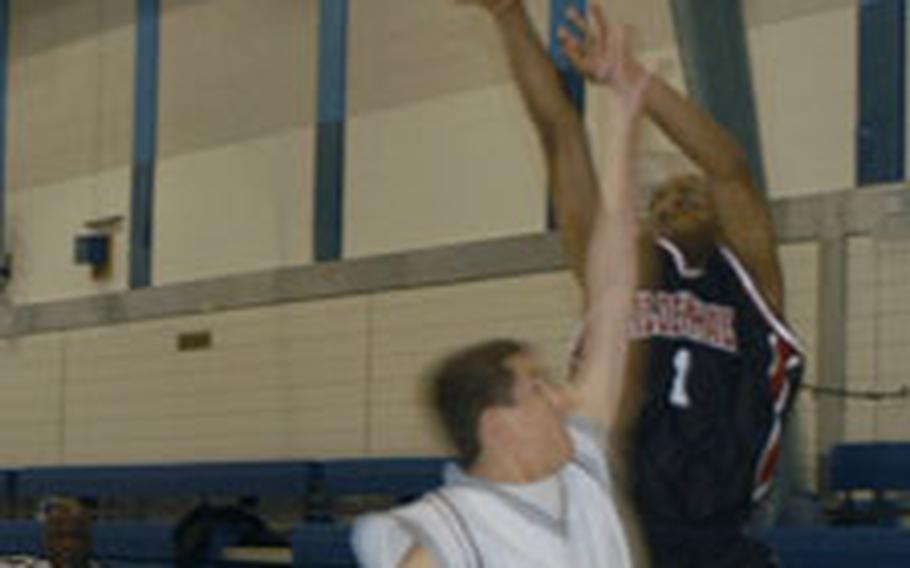 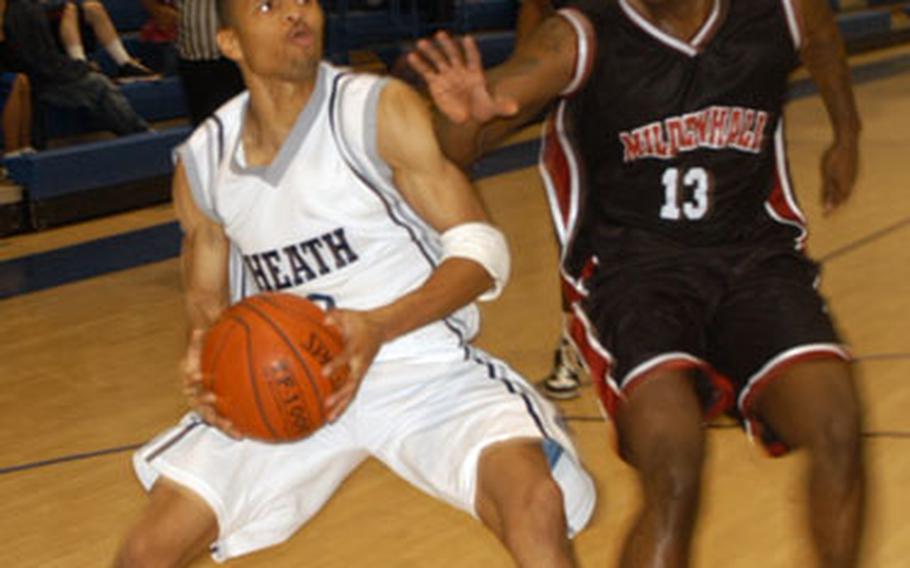 Michael Royster of the Lakenheath Eagles goes up for two points over Aaron Lee of RAF Menwith Hill in the first round of the tournament, which was held Saturday and Sunday. (Sean Kimmons / S&S) 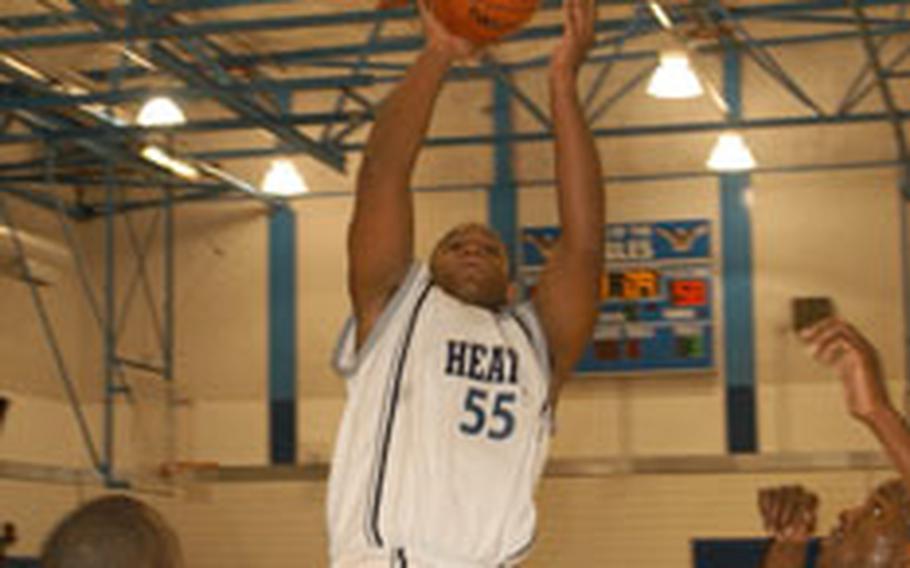 RAF Lakenheath&#39;s DeAngelis Bright goes up for two of his 12 points in Sunday&#39;s loss to RAF Mildenhall in the Dave Allen Classic. (Sean Kimmons / S&S) 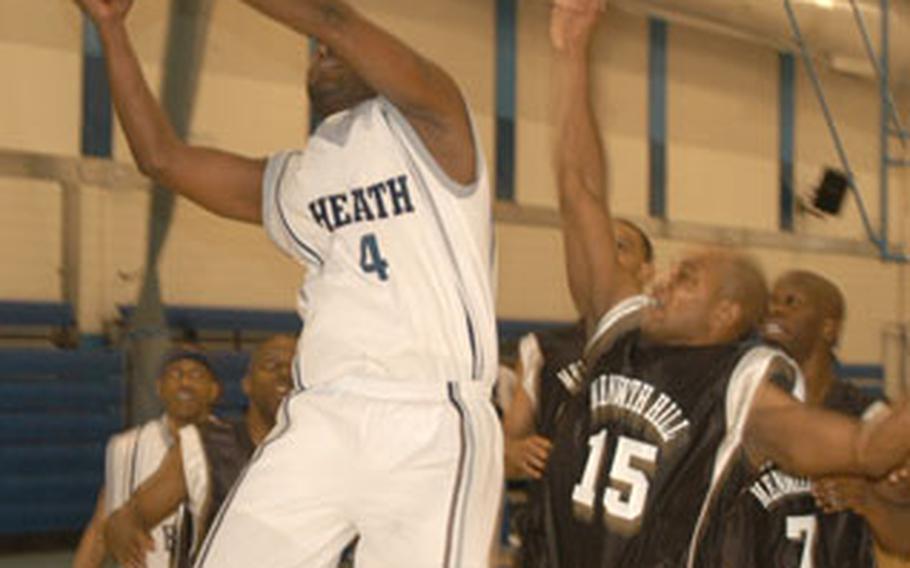 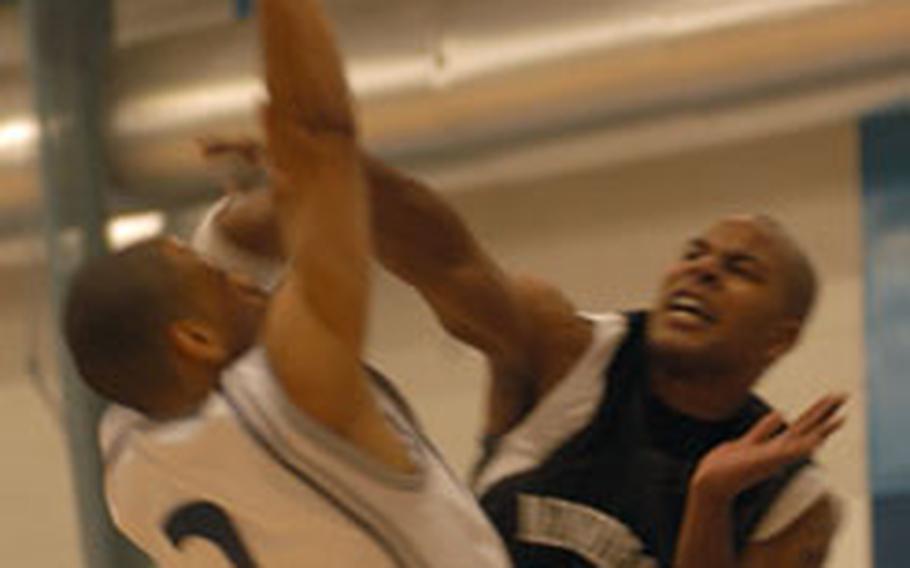 RAF Lakenheath&#39;s Michael Royster goes up for 2 points over the defense Aaron Lee in the first round of the Dave Allen Classic basketball tournament held over the past weekend at RAF Lakenheath. (Sean Kimmons / S&S)

RAF LAKENHEATH &#8212; The Mildenhall Marauders held off a flurry of three-pointers from a surging Lakenheath squad in the final minutes of their championship matchup to capture the title in the annual Dave Allen Classic basketball tournament.

Mildenhall built a 12-point lead in the second half of the championship game Sunday before the Eagles tightened up their defense and hit a series of key shots to bring the game within a point in the final minute.

But Mildenhall hit its clutch free throws while Lakenheath missed theirs and the Marauders escaped with a 75-71 win.

The Dave Allen Classic is held in honor of a former RAF Lakenheath master sergeant who was also a longtime sports official in England. Cancer claimed his life in 2006.

Mildenhall and Lakenheath were joined in the tourney by the Menwith Hill base team as well as MacPro, a London-based semi-pro team. Mildenhall, Lakenheath and MacPro each dropped a game in the tournament, but MacPro was edged out of the title game on points.

This year&#8217;s tourney was marked by close games. Mildenhall beat MacPro by one point to open the tournament but dropped a tilt to Lakenheath by one.

Gaines led all scorers, hitting four three-pointers in the first half and five in the game. The slight shooting guard kept the Marauders off balance throughout the game with a mix of deft long-range shooting and aggressive drives into the lane.

But Mildenhall overcame Gaines&#8217; shifty superlatives with a balanced scoring attack that focused on moving the ball in the half court and creating scoring options for a host of players. Five players scored in double digits, but none had more than 20 points.

Winners and losers aside, the tourney provided scores of fans a chance to beat the holiday season doldrums and paid tribute to a man who devoted much of his life to athletics in the U.K.&#8217;s military community.