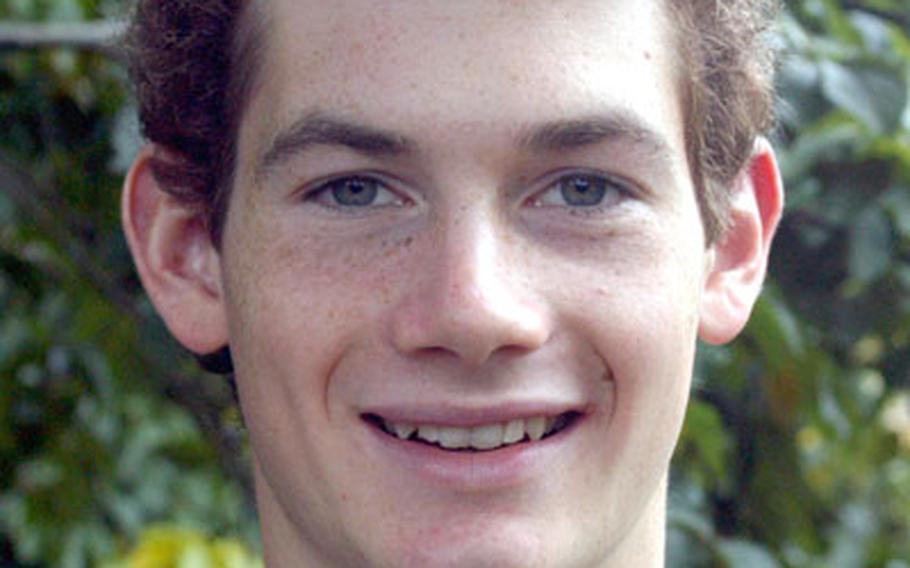 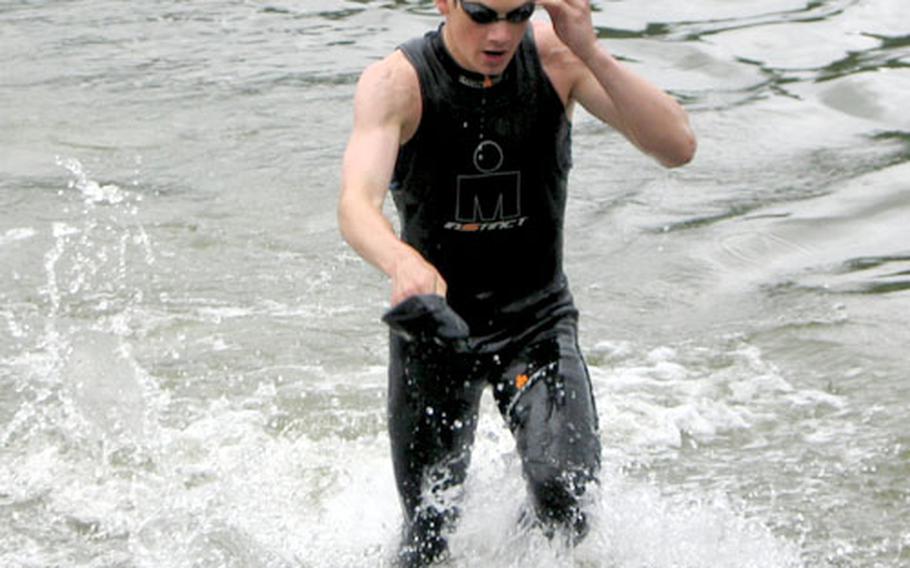 Lakenheath High School junior Greg Billington finishes the swimming portion of a triathlon this summer in England. Billington is one of the top runners in DODDS-Europe as a member of the Lakenheath cross country team. (Photo courtesy of Garrett Billington)

Pinched between his fingers and torn apart slowly over the course of a half-hour, the steak-and-cheese-filled, whole-wheat bagel is the sum total of the 16-year-old&#8217;s lunch; no side dish, no soda.

Though it&#8217;s a small detail, the bagel is an indication of the trait that has allowed Greg to break the course record on every cross country trail he&#8217;s run in England this fall, and made him one of the top young triathletes in the country: an unshakable personal discipline.

Greg has a 4.1 grade point average, carrying four advanced placement classes and jazz piano practice on his schedule. And he is one of the top runners in the Department of Defense Dependents Schools system, having yet to lose a race this year.

Not bad for a kid who doesn&#8217;t even consider running to be his forte.

Also a middle-distance track runner in the spring, the secret of success for the thin, sinewy teen isn&#8217;t actually a naturally gifted pair of legs &#8212; it&#8217;s a nearly unparalleled level of focus directed at always improving his ability.

Besides the bagels, Greg wakes up at 5:30 a.m. a couple of mornings a week to swim laps at a local pool before logging trail miles &#8212; sometimes up to 15 of them &#8212; in the afternoon. He also spent the summer trying to whittle down his five-kilometer time, he said.

&#8220;I train a lot more than other people do,&#8221; Greg said of how he attained a level of fitness that earned ninth place in the 16-to-19-year-old division at this year&#8217;s National Triathlon Championships in Bellingham, Wash.

Asked when he last took a day off from training, he had to squint his eyes and think a moment.

Greg has his mind set on winning the DODDS&#8217; European cross country championships this year after coming in second in 2004. He feels he has a legitimate shot at it if he can beat another standout runner from Ramstein, Germany.