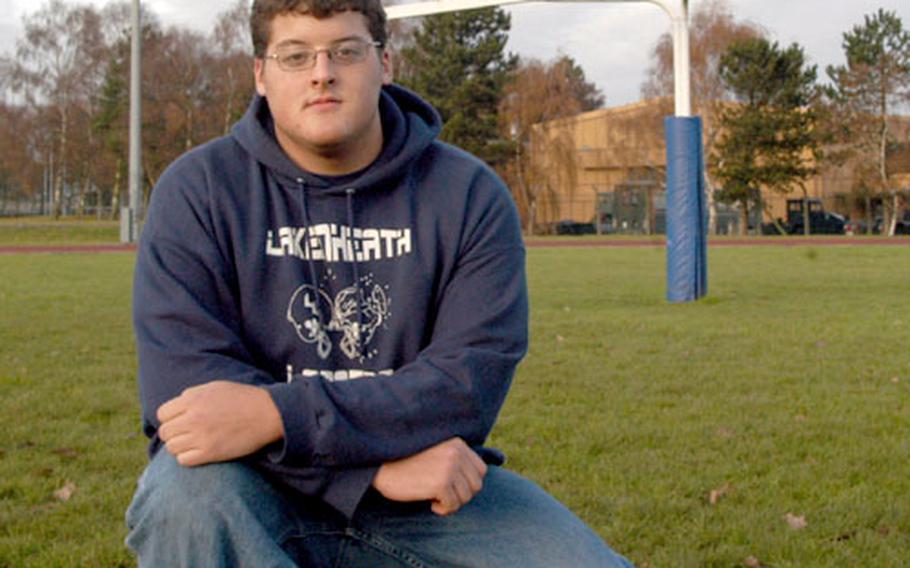 RAF LAKENHEATH &#8212; Jason Hacker has all the tools to play college football. Now all he needs is the opportunity.

He helped lead the Lakenheath High School football team last year through a challenging schedule that included several road trips to Germany. The Lancers finished 1-5, but Hacker dominated on both sides of the line of scrimmage, earning Division I all-conference honors.

Hacker, who carries a 3.0 grade point average at the Department of Defense Dependents School, was planning to wrestle until a knee injury sidelined him for the winter sports season.

Now, he is focusing on building bulk in the weight room and helping next year&#8217;s football team prepare for the 2006 campaign.

The 6-foot-2-inch, 285-pound senior registered 51 tackles, including 13.5 for a loss. He also had 6.5 sacks, three forced fumbles and one fumble recovery on defense.

In the Lancers&#8217; 17-14 win over Kaiserslautern, Hacker led the strong defensive effort with 12 tackles and two sacks.

With only 26 players on the team, the 18-year-old Texas native started both ways and got playing time at both offensive guard and tackle.

He is ready to play either offense or defense at the collegiate level.

He said he would love to play for his favorite school, the University of Texas, but is looking into Division III University of Mary Hardin-Baylor, which also is in Texas.

His father, Joe, is a retired Army staff sergeant who coaches the junior varsity team at Lakenheath.