Ten-year-old Amy Hillsden pulls back her compound bowstring as she prepares to fire an arrow at a nearby target. Hillsden, from Dagenham in Essex, was shooting at the RAF Lakenheath Liberty Archers club grounds near the base. About 40 percent of the 50 or so club members are local British citizens. (Jason Chudy / S&S)

Ten-year-old Amy Hillsden pulls back her compound bowstring as she prepares to fire an arrow at a nearby target. Hillsden, from Dagenham in Essex, was shooting at the RAF Lakenheath Liberty Archers club grounds near the base. About 40 percent of the 50 or so club members are local British citizens. (Jason Chudy / S&S) 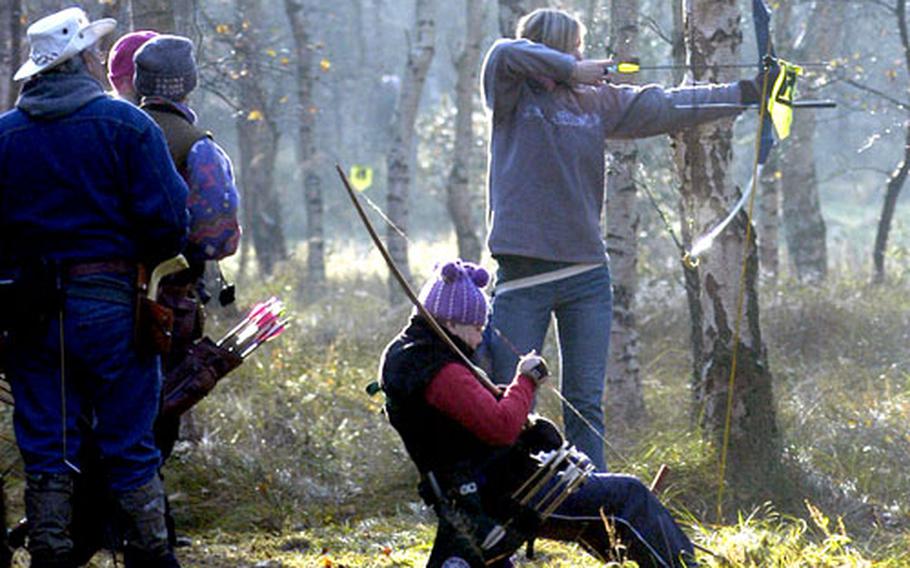 A British archer prepares to release his arrow at a target during a Liberty Archers tournament just outside RAF Lakenheath recently. (Jason Chudy / S&S) 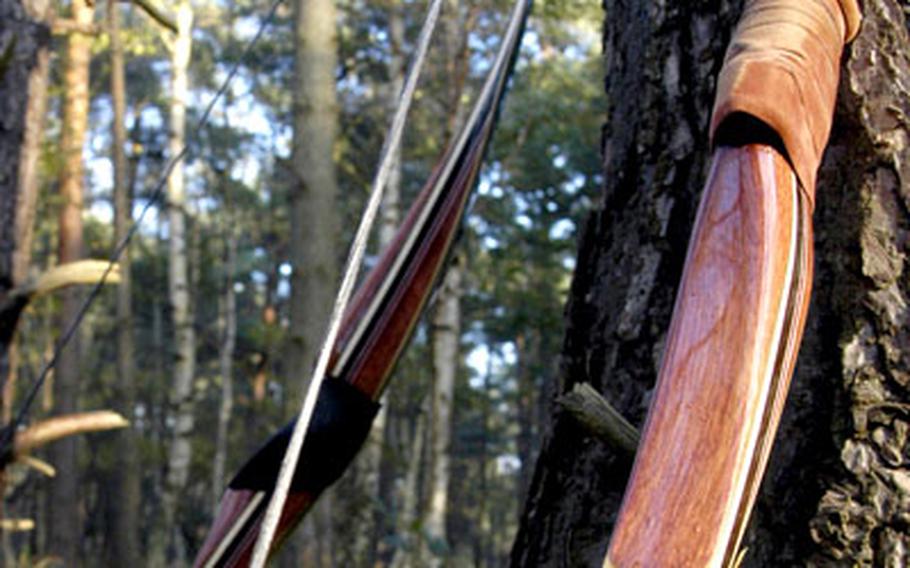 Sherwood Forest may be the home of Robin Hood and his bow-toting merry men, but when the Lakenheath Liberty Archers take to a forest they&#8217;re after a tougher target than Prince John.

During a recent daylong tournament at their off-base range, the archers hunted velociraptors and stegosauruses, among other targets.

Members of the Liberty Archers club have been shooting longbows, compound bows and recurves for more than 20 years.

&#8220;If you wanted to, you could go to an archery competition every weekend,&#8221; club secretary Beth Knight said.

Knight said many people don&#8217;t realize that though they can&#8217;t bring guns to England, they can bring their archery gear.

Her husband, club president Master Sgt. Jimmy Knight, is deployed to the Middle East. Club rules require the president to be an active-duty servicemember.

The club&#8217;s popularity has spread from the base into the local community. About 40 percent of the 50 or so members are British citizens from the local area, said treasurer Randy Borden.

The club shoots at three-dimensional targets, ranging from a full-sized bison to birds and fish, and even a few dinosaurs. They&#8217;ve got dozens of different targets in their &#8220;zoo.&#8221;

Many of these targets were spread out during their mid-November tournament over the few dozen acres just northeast of the base that make up their leased land. Some unusual targets were included, such as a monkey and a fish.

They hold three tournaments during the year, drawing archers from all over the country &#8212; and even mainland Europe.

Club members also have attended many national and international tournaments throughout England and Europe.

Archery also allows bow hunters a chance to get out into the woods again.

&#8220;Many Americans [in the club] are frustrated hunters just wanting to keep their skills honed,&#8221; Borden said.

Want to join the merry band of archers?

The Liberty Archers meet once a month, shooting at their club range just across the A1065 from the aircraft viewing area at the northeast corner of RAF Lakenheath.

Club dues are used for upkeep of targets.

Those interested in the Liberty Archers can contact Borden at the Lakenheath Auto Hobby Shop at DSN 226-5180. The club also has a Web site: www.geocities.com/libertyarchers