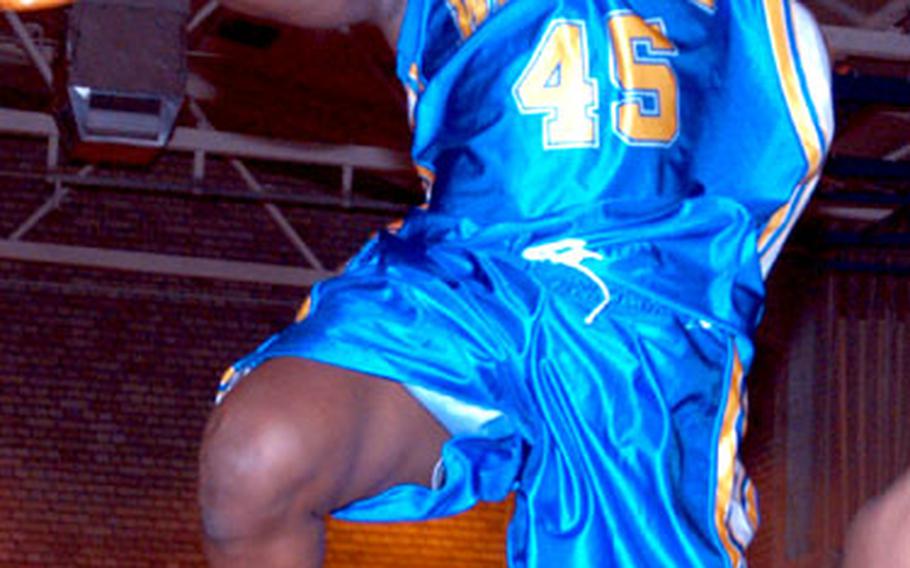 In the first game of a Friday night doubleheader, Angela Gafford and Megan Carradine each scored 16 to lead the Lady Lancers to a 63-36 win over the visiting Lady Warriors.

Gafford, who played tough around the basket all night with 23 rebounds, scored 12 points in the first half while Carradine made her mark from the free-throw line where she went 8-for-10, including 6-for-6 in the second half.

The senior from Texas said proficiency from the charity stripe was something the Lady Lancers worked on all week.

Wiesbaden was led by Brittany Harris, who scored 12 points.

The win lifts the Lady Lancers to 3-3 and drops the Lady Warriors to 1-4 in the young season.

In the second varsity game of the night, the Lancers&#8217; defensive intensity kept the game close and had the Warriors having to shift their scheme. But a talented Wiesbaden lineup ultimately prevailed in the 54-46 win.

But Lakenheath, which was fighting hard for its first victory, refused to relent and fought into the final minutes of the contest.

The Lancers actually outscored the Warriors by one in the second half behind solid post play from Carl Snapp, who finished with 19 points.

But in the end it was a balanced scoring attack that saw seven Wiesbaden players score in the second half that led to the Warriors victory. David Bradford led Wiesbaden with 14 points, including nine in the first half.

The senior from Georgia said Lakenheath&#8217;s defensive tenacity surprised the Warriors at first.

The win improves Wiesbaden to 4-1 and drops the Lancers to 0-6.