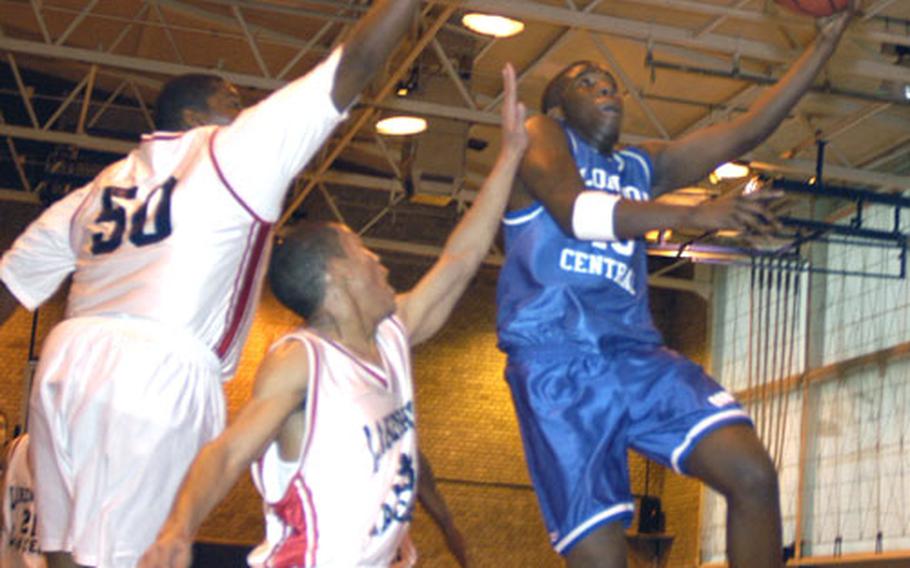 London Central High School&#39;s David Marbury take the ball to the hole in the first half of the Bobcats&#39; contest against the Lakenheath Lancers. The Alabama native finished with a game-high 22 points. (Bryan Mitchell / S&S)

RAF LAKENHEATH &#8212; The Lakenheath High School basketball teams split a series with London Central High School over the weekend, with the Lady Lancers team winning two games and the Lancers boys losing both their contests.

The home-and-home series lifted the Lady Lancers to 2-2 while the losses dropped the Lancers to 0-4 heading into the Christmas break.

In the first game of Saturday&#8217;s varsity doubleheader, the Lady Lancers used tough defense and a second-half scoring blitz to secure the 20-point win over London Central. The Bobcats kept the game close in the first half with three 3-pointers and trailed 28-19 when the teams headed to the locker rooms.

Both squads started sluggish, with London Central held to eight points in the first quarter and Lakenheath tallying nine in the second quarter.

Gafford led all scorers with 27 points. She was 3-of-4 from the foul line.

After the game, the Illinois native was pleased with her team&#8217;s effort, but remained focused on the remainder of the season.

In the second game of the Saturday afternoon doubleheader, strong perimeter play from David Marbury and Frank Augusto helped push the Bobcats to a 53-50 victory over the Lancers in a game that came down to the final minute.

Lakenheath, looking for its first win of the season, got a strong post performance from Carl Snapp, who scored eight in the first quarter and helped the Lancers secure a 29-26 halftime lead. Snapp finished with 20 while fellow post player Kevin Mincey contributed 14 points &#8212; 10 in the second quarter.

The Bobcats netted six 3-pointers to the Lancers one, when Myke Carter hit a crucial long ball to bring the Lancers within two points with less than four minutes remaining.

In the end, though, the shifty guard play of Marbury and Augusto ultimately prevailed over Lakenheath&#8217;s interior dominance. The win boosted the Bobcats to 4-0.

Marbury paced the Bobcats with 22 points, including three 3-pointers in the second half.

Augusto, who finished with nine points and several key assists, stressed the importance of teamwork.