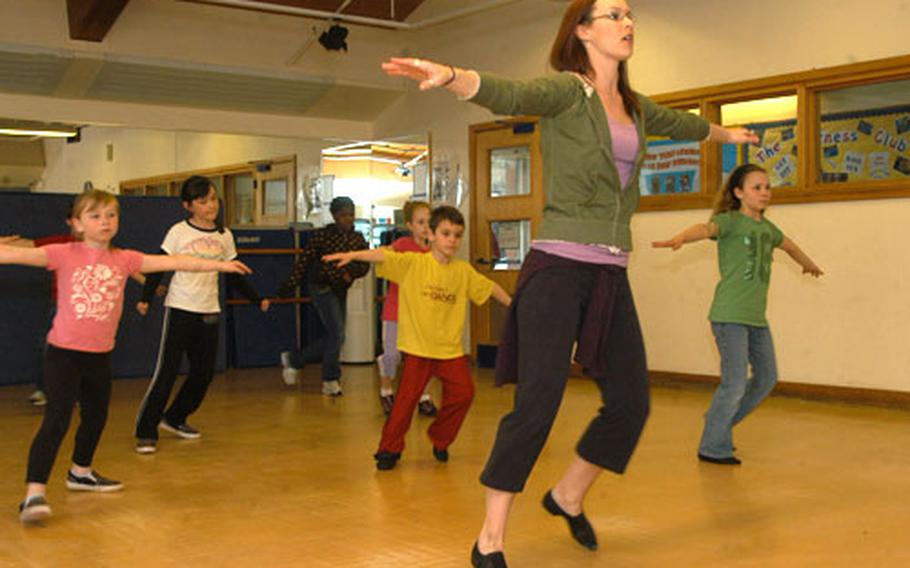 Dance teacher Jill Barranca leads a group of boys and girls in a dance routine during one of her recent hip-hop classes at RAF Mildenhall&#39;s Youth Center. (Sean Kimmons / S&S)

RAF MILDENHALL &#8212; Some kids want to smack a baseball out of the ballpark like Barry Bonds and some want to nail a last-second shot like LeBron James.

For those who fall under that group, the youth center here has launched new hip-hop dance classes for boys and girls between 8 and 13 years old.

But don&#8217;t let the name fool you. Kids aren&#8217;t getting &#8220;crunk&#8221; or rubbing up against each other like adults in nightclubs. The hourlong classes go more into choreographed jazz dance routines.

&#8220;I threw in the jazz because usually hip-hop doesn&#8217;t have any technique. It&#8217;s kind of freestyle,&#8221; said Jill Barranca, who began the classes in February as an alternative to other dance courses at the center.

The music is also toned down to cater to pint-size dancers. So forget the profanity-laced tracks from The Game and 50 Cent. Instead, think Timbaland, Pussycat Dolls and other pop stars of today&#8217;s music.

Taylor, who enjoys the moves of Beyonc&#233; and Shakira, isn&#8217;t new to the dancing field. She said she prefers this class to her previous tap-dancing course.

Wearing a bright yellow T-shirt with &#8220;I know I can dance&#8221; on the front to a recent class was Carson Alvarez. The energetic 8-year-old jumped and spun around showing off moves he had just learned in class.

When he gets older &#8212; and after plenty more practice &#8212; he aspires to become a professional hip-hop dancer.

Parents of the nine students taking the class recently peeked through windows to see their kids strut their stuff during class.

Kelly McNichols kept an eye on her 9-year-old daughter, Chloe, as she was taught a new routine.

The majority of students in the class were girls but Barranca stressed that her routines aren&#8217;t as girly as boys might think. The moves she teaches can even help boys impress the ladies when school dances come along or when they&#8217;re old enough to hit up nightclubs.