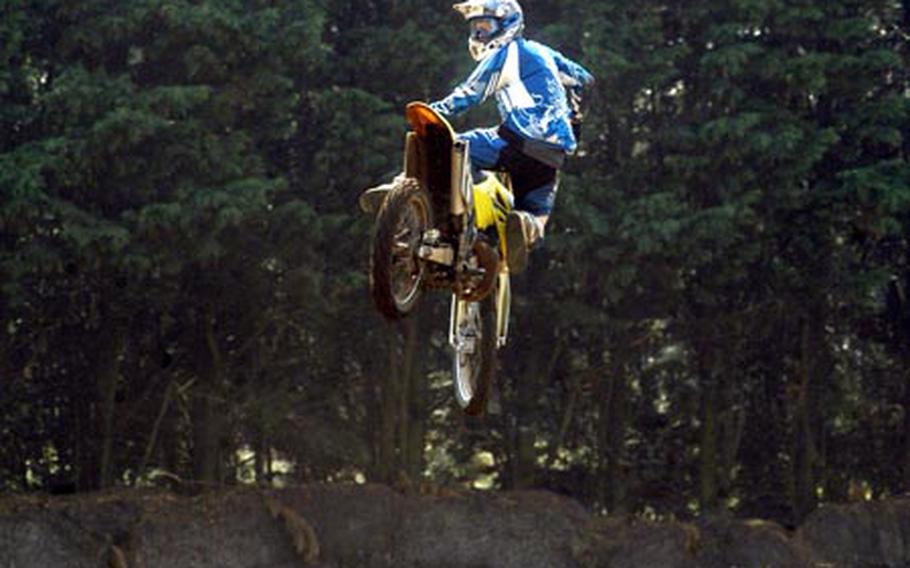 Ian Fraser, 19, looks to his rear for other riders while making a jump along the racetrack at Moto-Land UK in West Row. (Sean Kimmons / S&S) Fraser soars into the air off a ramp along the racetrack at Moto-Land UK in West Row. (Sean Kimmons / S&S)

WEST ROW &#8212; Looking for a sweet jump for your dirt bike? The Moto-Land UK motocross racetrack has you covered.

The one-mile track, hidden behind Mildenhall Speedway in West Row, is a winding journey with tight turns and dirt mounds where riders catapult into the air.

"It&#8217;s sort of an intermediate track," Cliff Bastick, who has owned the track for six years.

Novice riders typically hone their skills every Tuesday while professionals hit the track on Thursdays, he said.

He estimates that pro riders have soared up to 70 feet straight ahead on the track&#8217;s steepest mound. And although it can be an exhilarating experience, jumping is not mandatory, especially for those just starting out.

Last Tuesday, Ian Fraser was hurled at least 20 feet into the air on his modified 144 cc Suzuki dirt bike.

A practice session for motorcycles 125 cc and up costs 25 pounds for the whole day (six hours). Riders with smaller bikes are charged 2 pounds less. At the moment, motorcycles are not available to rent.

"It is an extreme sport," Bastick said of motocross racing, who advises beginners to play it safe.

Injuries often happen, but life-threatening ones are rare, he insisted.

"There are more deaths and broken necks in horse riding than this," he said.

Local U.S. airmen frequently make it out to the track, only a few miles from RAFs Mildenhall and Lakenheath, Bastick said.

"They love it here," he said. "They make it out here whenever they can."

Those in need of basic training can pay for a full day of instruction at the track. At 130 pounds, one-on-one training is expensive. In a group of four or five riders, the price drops to 30 pounds each.

Bastick said some of the drills covered include how to tackle cornering techniques, proper riding position, jumping and how to stick a landing.

Once ready for competition, riders can enter races held almost every Sunday at the track. The entry fee can be as low as 5 pounds, depending on the event. Spectators looking for motocross action don&#8217;t have to pay anything, he said.

What to do: This one-mile track filled with jumps and tight turns is open for practice sessions every Tuesday and Thursday from 10 a.m. to 4 p.m.

Price: Riders with dirt bikes 125 cc or higher pay 25 pounds for the whole day, while those with smaller bikes pay 2 pounds less. Pressure washers are also available for 2 pounds.