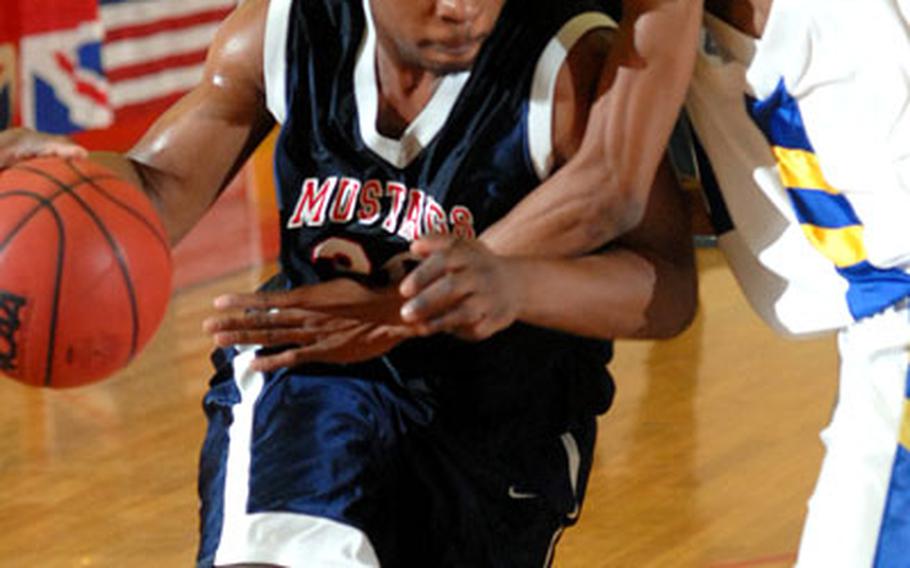 Menwith Hill’s Le’Shawn Adams drives against an opponent in last season’s Division IV final against Bamberg, in Mannheim, Germany. Menwith Hill lost to Bamberg, 61-39. Adams will be playing for the Mustangs again when the new season gets underway. (Michael Abrams / S&S)

Professional and collegiate players hit the hardwood a few weeks ago to tip off the 2007-08 campaign. Now it&#8217;s time for high school hoops.

The three American military high schools in England started practice last week. As with nearly every year, coaches have to adjust to not only the loss of key players, but also to the infusion of new talent.

A quick look at the teams representing Alconbury, Lakenheath and Menwith Hill this season:

Alconbury: Dragons coach Ron Behr had more than two dozen hoopster hopefuls vie for a spot on the varsity squad &#8212; with slots for just over half that many.

He said the program&#8217;s recent success, which includes reaching the Division IV semifinals in the European tournament the past three years, has created a buzz about the team and its potential.

The squad will be tough to defend in the post with two players well over 6 feet tall. Sophomore Arous Brown is a 6-foot-5 forward who can get up and down the court, while 6-8 Connor Redding is a senior new to the program.

Senior guard Malcolm Bennett rounds out the Dragons squad with experience in the backcourt.

Lakenheath: The Lancers will begin the campaign under the stewardship of Alan Campbell, who takes the reins after leaving the same position at London Central High School, which closed last year.

Campbell will build a team around returning players Eddie Alford and Taiyo Robertson. He said a handful of other players, including Mark de la Cruz, Zach Randolph, Jeff Griffis, Aaron Miles and Trevor Snapp, have improved in the off-season and look to be solid contributors.

&#8220;Our goal is to be competitive in every game and develop into a team that can make some noise in the Division I tournament,&#8221; Campbell wrote to Stars and Stripes in an e-mail. &#8220;We will need to show up ready to play, as well as be able to make adjustments in real time.&#8221;

Menwith Hill: Head coach Pete Resnick said this season&#8217;s schedule for the Mustangs appears as tough as any he&#8217;s seen in his 10 years leading the team.

&#8220;We&#8217;ve got to play Lakenheath at Lakenheath and travel to some other tough spots. And we know Rota will bring many of the same athletes we saw play tough on the football field,&#8221; he said.

Senior Lyle Dorsey made the move from the Ramstein Royals to Menwith Hill for his final year of school and will join fellow senior Le&#8217;Shawn Adams.