Sports: Get ready to stomp the yard lines With about 19 players on board as of last week, first-year Alconbury Dragon football coach Duke Eidt said he&#39;ll emphasize endurance so that his guys can play both sides of the ball. (Geoff Ziezulewicz / S&S)

With about 19 players on board as of last week, first-year Alconbury Dragon football coach Duke Eidt said he&#39;ll emphasize endurance so that his guys can play both sides of the ball. (Geoff Ziezulewicz / S&S) 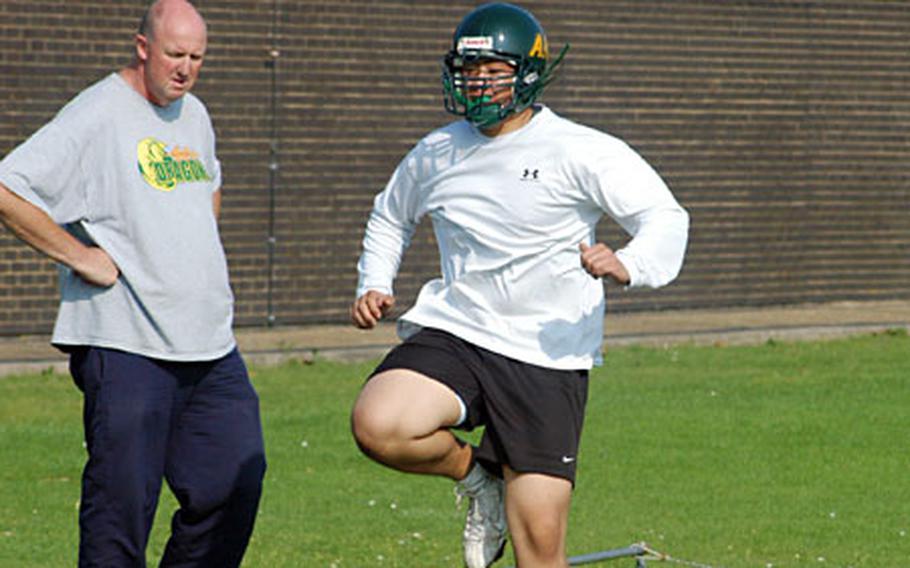 As August draws to an end, summer appears all-too-ready to leave England. Conditions have been cold, cloudy and rainy during what, back in the States, are usually the dog days of summer.

But there is a silver lining. Or a green or blue lining. Or whatever colors your team wears on game day.

Because as the fall comes, so does football.

And the football teams at Lakenheath, Alconbury and Menwith Hill high schools are gearing up to do battle on the gridiron when the season starts in a few weeks.

The schools feature different enrollments, expectations and starting points, but the name of the game is competition. Here&#8217;s a look at each team, and what the coaches and players say about their teams.

The Lancers won&#8217;t be a young team this season. They&#8217;ve got a big group of upperclassmen, about 20 seniors and about 11 returning starters, Coach Matthew Martinez said last week as his players roughed out a practice in the cold rain.

Football IQ &#8212; almost an intellectual understanding of the game and what needs to be done in the midst of those games &#8212; is abundant on the team led by captains quarterback Nate Allison and wide receiver Eddie Alford, Martinez said.

The Lancers will look to close out games, and Martinez said he wants to instill that visceral instinct that will make his players seize the game around the throat when needed.

Before practice last week, Alford said his team should have an &#8220;explosive offense&#8221; this year, and that they&#8217;ve got a nice, sizeable offensive line.

He also credited the coaching staff.

Although small in enrollment and geographically isolated in north Yorkshire, the Mustangs posted a 2-4 record last year and made the playoffs, something coach Peter Resnick said he wants to build on.

Resnick said fans should keep their eyes on Robbie Sexton, a 6-foot 4-inch tackle who&#8217;s weighing in at about 260 pounds.

Sexton and the rest of the line will be helping clear the way for returning all-conference running back Le&#8217;Shawn Adams.

Resnick said he&#8217;d like to see his defense improve its tackling this year.

The school&#8217;s isolation means a lot of games on the road, he said, and travel affects preparedness. Still, plane tickets through low-fare airlines are increasingly affordable, Resnick said, which reduces travel time.

Duke Eidt is in his first season as Alconbury&#8217;s coach. And many of his players are in their first year of varsity football.

Right now the team is looking to make sure it can give everything for four quarters, Eidt said.

The size of the squad will dictate that.

And win or lose, the season and all its possibilities are waiting.