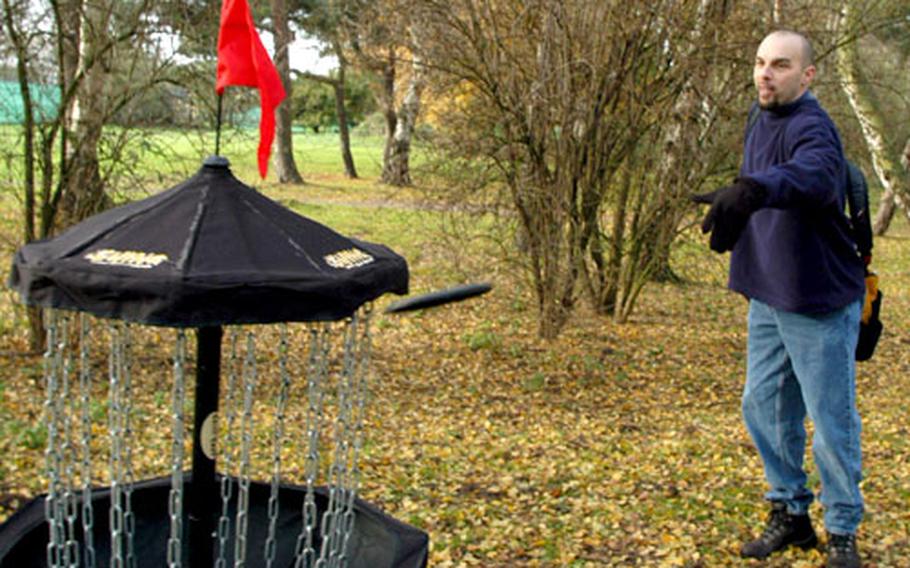 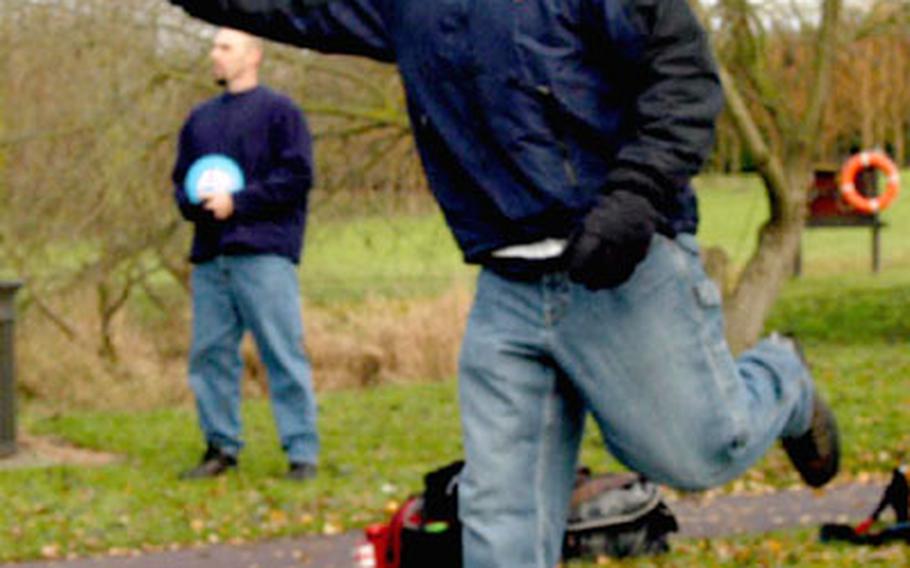 RAF LAKENHEATH &#8212; Sometimes, you have to make that extra effort to forge a friendship. Especially when that friend shares your unique passion.

That was the case when Fernando Brown left a series of notes on the windshield of Rick Hoffa&#8217;s car a few years ago. Brown spotted a disc golf bumper sticker on Hoffa&#8217;s vehicle and thought he had found a new partner.

Today, Brown, 29, and Hoffa, 42, have parlayed their hobby into a professional gig that earns them the occasional payday as well as trips throughout Europe and the United States.

The two former airmen, who both have wives still in uniform, aren&#8217;t earning enough to buy summer cottages on the shore, but they have won a few hundred dollars here and there.

Brown, who works at the RAF Mildenhall office of the U.S. Postal Service, pocketed $162 for his sixth-place finish at the 2005 British Open, while Hoffa took home $325 after capturing the Master&#8217;s division at the same tournament.

And, if you name a country in Western Europe, odds are one of the two have thrown their discs there.

&#8220;I have been to Belgium, Switzerland, Sweden, Holland, Finland, France, Scotland and Germany as well as about 13 states to compete,&#8221; Brown said.

Disc golf is a simple game that shares many traits with its more expensive counterpart in traditional golf.

A participant throws a disc toward a disc pole hole. The object is to put the disc in the hole&#8217;s bucket in as few throws as possible.

Many people play with just one disc, but hard-core players carry a full bag of discs like a golfer would clubs.

&#8220;There are long-range drivers, midrange drivers, discs that fade left or right and then, of course, we have putters,&#8221; Hoffa said. &#8220;Anyone with a Frisbee can play, but on some courses it would be better to have a disc to get more distance and accuracy.&#8221;

Ed Headrick is credited with inventing the sport in 1975 when he was awarded the patent for the first disc pole hole. That same year, Headrick opened the world&#8217;s first course in Pasadena, Calif.

Today, there are more than 1,200 courses worldwide.

For the two unlikely professional athletes &#8212; Brown started playing disc golf after seeing the game featured on an episode of &#8220;Seinfeld&#8221; &#8212; the best part of their life of disc is the friends they make.

&#8220;The truth is, most disc golfers love to see new people trying the game, and are more than willing to play a round with them and give them advice along the way,&#8221; Brown said. &#8220;I think people would be surprised at how easily they are accepted on the course.&#8221;

For more information on the sport, visit www.pdga.com or www.discology.co.uk.