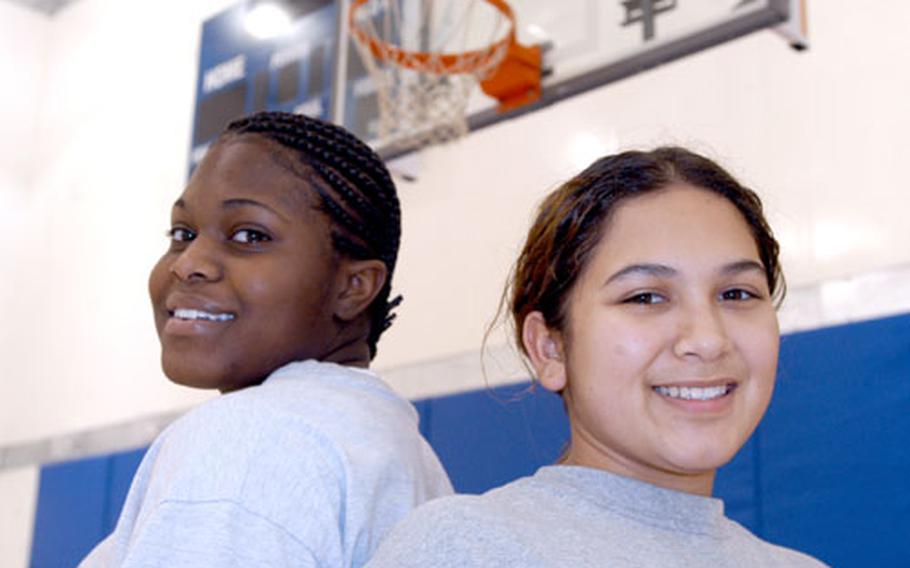 Vikki Sixtos, right, and Essie Belton are the senior co-captains of the Lakenheath Lady Lancers basketball team. The girls, who’ve spent four years on the team, are good friends off the court as well. (Bryan Mitchell / S&S)

RAF LAKENHEATH &#8212; Vikki Sixtos and Essie Belton are the rarest of commodities at Lakenheath High School: seniors with four years as Lancers.

Sixtos&#8217; father and Belton&#8217;s mother serve in the Air Force and requested extensions so their daughters could enjoy a stable senior year at Lakenheath. Now, with their final year of high school winding down, the two longtime friends and co-captains of the Lady Lancers basketball team are working hard to lead Lakenheath to victory.

But, along the way, they&#8217;re certainly enjoying the view.

While the team&#8217;s record is below .500, the girls appreciate the camaraderie between teammates and the road trips they enjoy together.

Lakenheath, the United Kingdom&#8217;s only Division I school in the Department of Defense Dependents Schools system, traveled earlier this season to Belgium and has two road trips slated for later this season in Germany.

The trips are far from high luxury. There are long bus trips, sleeping on cots and multiple games in a day. But the students, especially seniors with only a few continental trips remaining, revel in the adventure.

The two also are focused on helping the team jell in order to reach its potential come tournament time.

Both girls lead the squad with their experience in adapting to new players and styles.

After this season, both are heading back to the States.

Sixtos would like to be a social worker, focused on children, while Belton aspires to hold a marketing position with the NFL or NBA.

But, no matter what they do, the two plan to stay in touch long after the final buzzer has sounded on the season.