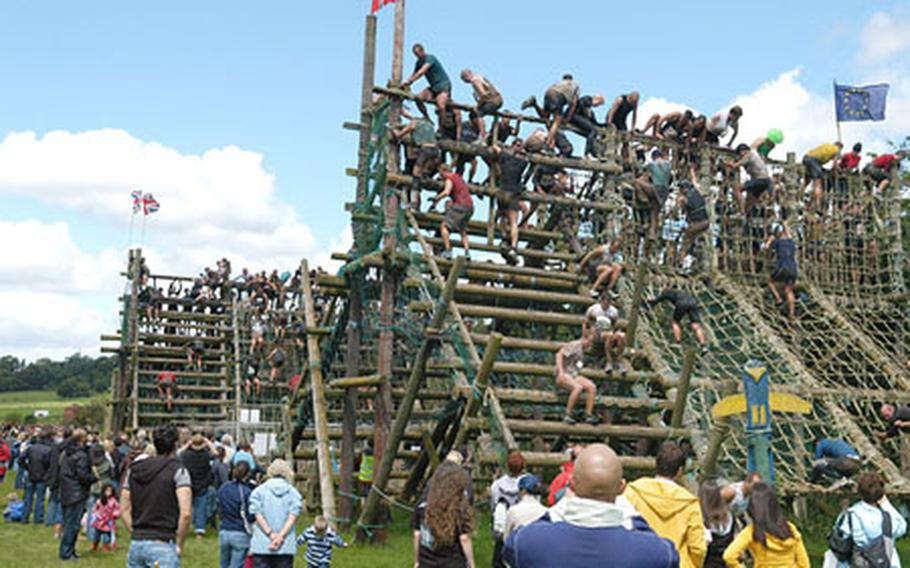 The Tough Guy events are just as fun for spectators, most of whom have friends or family running the course. (Geoff Ziezulewicz / S&S)

Willy Mouse has been running the Tough Guy challenge at his rural property west of Birmingham for about 20 years now.

But in a throwing down of the gauntlet, he said Americans shouldn&#8217;t try this extreme challenge.

Regardless of nationality, the Tough Guy course is an extreme experience for anyone. It will leave you sweaty, muddy, messy and maybe even broken.

Billed as the &#8220;original survival ordeal&#8221; on www.toughguy.co.uk, the event&#8217;s Web site, Tough Guy is a twice-yearly event where participants run, climb, swim and push their personal limits to the brink of sanity.

Along an approximately six-mile course, participants run up and down hills, climb massive 40-foot-high wooden A-frames, run through burning bales of hay and navigate their way through a host of other obstacles.

During the summer events, such as the one held last month, contestants run the course twice. Thankfully, at the January event, it&#8217;s one lap around with less emphasis on the water areas.

There were the legions of face-painted competitive teams, but there was also the guy in the Batman costume, two friends wearing three-piece suits and countless contestants hauling along blow-up dolls.

&#8220;It attracts mainly military types, armed forces on the ground, police and fire service, things like that,&#8221; Mouse said. &#8220;Then you have the physical fitness clubs, people who achieve things, and people who have too much money and want to learn about real life.&#8221;

There&#8217;s also a definite primal-carnival feel to the competition. As bagpipes and drums filled the air, families, friends and well-wishers watched contestants go by at various points, and concession stands kept those not brave enough to test the Tough Guy with plenty of things to eat and drink.

Before the first crop of racers set off, signaled by the Raiders of the Lost Fart team setting off a ceremonial cannon, Mark Tritton and other contestants stood locked in stockades at the top of a hill, their penalty for registering in the wrong tent.

Participants have to sign disclaimers regarding any injuries, and injuries do occur, he said.

Woollen said some Royal Marines used the course as an unofficial training camp, and the more hardcore enthusiasts make up their own incentives.

For Woollen, running through &#8220;The Tiger,&#8221; a course segment that includes a run through a section of electrified wires flanked by two 40-foot climbs, wasn&#8217;t enough.

Despite the hardcore nature of Tough Guy, people of all shapes and sizes turned out, with nothing in common except wanting to push themselves.

Justin Gardner, an electrician who stopped during the second lap because a friend got a concussion, said he enjoyed his first year at Tough Guy.

He wasn&#8217;t expecting the electrified cords, either.