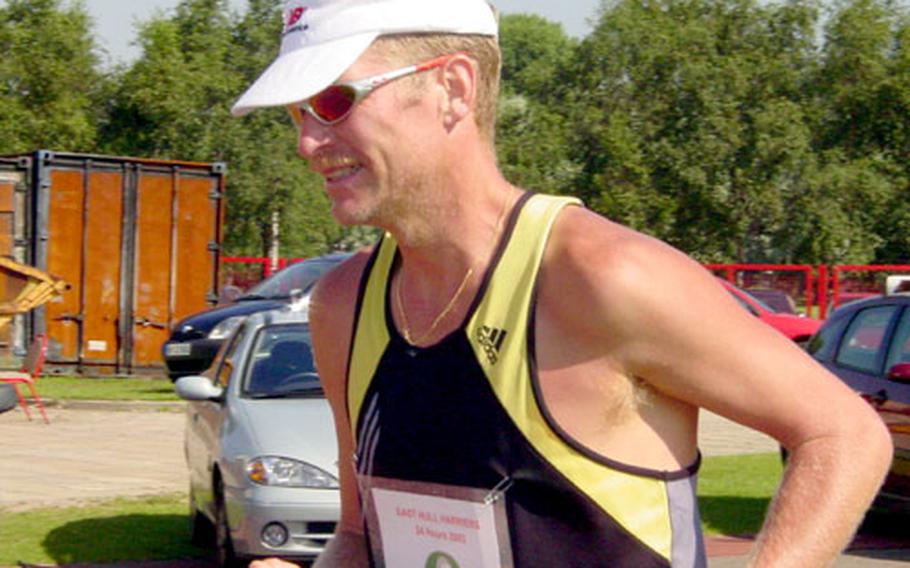 Senior Master Sgt. Garth Peterson pushes through the Hull 24-Hour race in 2003. “The goal, a lot of the time, is just to keep plodding along,” Peterson said. (Courtesy photo)

RAF MILDENHALL &#8212; The numbers are, to put it bluntly, astonishing.

As times and distances go, they might seem related to bus schedules or ferry rides, but they are the actual times that Senior Master Sgt. Garth Peterson has run this year, mostly without stopping.

Peterson, 43, is considered an ultrarunner, that is, a person who frequently runs for distances so vast over such protracted time lines that the human body often will not tolerate the effort.

Peterson, for instance, once pulled off to the side in an ultrarun, feeling the need to vomit.

His stomach had been upset when he started the race, he said, and he&#8217;d been jostling his organs for hours by the time he felt queasy. Eventually, he started to bleed internally.

Peterson threw up three times in the race, he said, but each time he did he felt better, and he kept running.

It&#8217;s that kind of voluntary punishment people often associate with ultrarunning, he said, and while the physical exhaustion is a part of the sport, Peterson said he does it mostly, of all things, for the enjoyment.

The ultrarunning community is small and intimate and supportive, and the races are held all over Europe.

But Peterson also has a need to push himself to great lengths that has driven him to enter a dozen 24-hour races in the past several years.

His devotion to the sport started in the late 1990s when he was stationed in Italy, and he signed up for a prestigious 100-kilometer race after having tried his hand at several marathons.

The run was hard, but not insurmountable, he said, and he soon found himself preparing for his first 24-hour run. Since then, Peterson has thrown himself into runs of all times and distances, from 10-kilometer races to the unofficial European ultrarunning championships, a 48-hour event in Prague.

It was there last March, Peterson said, that he suffered his most debilitating running injury to date when he ran so hard his leg started to break.

After 38 hours and 174 miles, he was forced to drop out of the Prague race due to a stress fracture in his tibia. It was frustrating, he said, because he was on track to beat his goal of covering more than 200 miles in 48 hours, a mark he hopes to surpass in this year&#8217;s championship.

With those kinds of miles on a 43-year-old body, one might worry about the welfare of a man, lithe and healthy though he be. But Peterson&#8217;s wife, Beth, said age isn&#8217;t really a factor.

Neither does the running overwhelm their lives, she said. Garth runs his 45 or so miles per week during lunch hours, and the races give the couple and their two daughters a chance to take trips together, she said.

She&#8217;s also proud of her husband&#8217;s accomplishments, she said. Peterson in the past several years has been ranked third in the United Kingdom for ultrarunning, and regularly finishes in the top five or top 10, even at big races.

Peterson said he knows it sounds masochistic to many people, but he constantly is amazed by what the human machine can do.