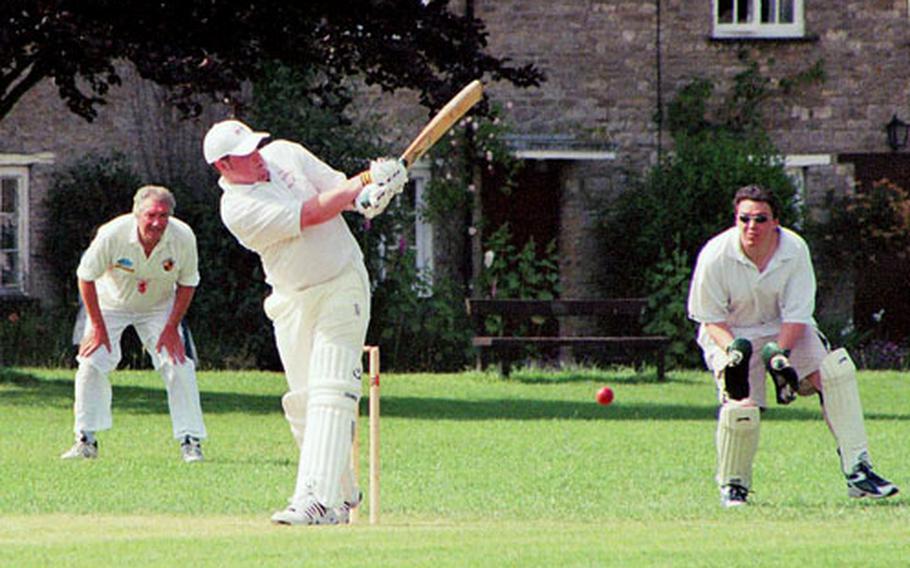 Croughton batsman Andrew Jones swats the ball in a match against a team from Evenly during the American team’s inaugural season last summer. (Photos courtesy of Jon Florey)

Croughton batsman Andrew Jones swats the ball in a match against a team from Evenly during the American team’s inaugural season last summer. (Photos courtesy of Jon Florey) 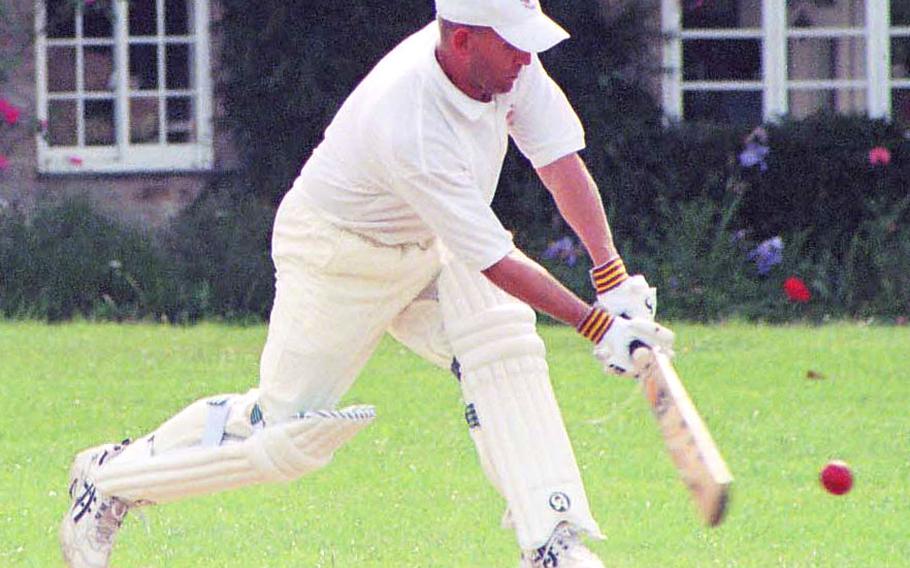 RAF CROUGHTON &#8212; When breaking into the world of British community cricket, a U.S. servicemember&#8217;s typically-American instincts can work for and against him.

For instance, when 1st Lt. Jon Florey from the 422nd Air Base Group was turned away from joining a local English pub team last spring, he applied some hard-nosed persistence and started his own team, made up exclusively of Americans, and started setting up matches.

Practicing with borrowed and self-supplied gear last summer, they scraped together enough of a team to beat several local squads, and managed to amass a .500 record.

But when American sportsmen get into a game with a pitcher (well, bowler), a batter and some fielders, their baseball instincts tend to take over, Florey said. And that can be bad.

American batters (in cricket, &#8220;batsmen&#8221;) often instinctively treat the wickets like home plate, standing to the side and taking sweeping cuts at the ball, when they really should be standing directly in front of the posts, blocking them, he said.

And when trying to field a ball without a glove, some players naturally shy away from sticking a bare hand in front of a whizzing sphere that&#8217;s harder and denser than a baseball, said Capt. Joel Nonnweiler of the 422nd Communications Squadron.

Florey said most players on the team have balked at trying to nab a frozen-rope liner coming off the bat of an English player.

Last year the squad managed a 6-6 record against other club teams, Florey said, a shocking result for both the Americans and their opponents.

They&#8217;ve yet to win a match in three official games so far this season, Florey said, but it isn&#8217;t for lack of an opportunity to play. A lot of English teams are keen on squaring off against an American squad to show the visitors how the locals do it, he said.

Of particular trouble to the American team is the batting, team members said. They are so erratic, in fact, that Florey usually volunteers his team to take the field first &#8220;because we want to get a game in,&#8221; he said. Otherwise, the English teams&#8217; scores quickly overtake the Americans&#8217;, and the game ends quickly, he said.

The team has a core of competent bowlers, Nonnweiler said, though their better throwers often flummox English batsmen not because of guile or speed, but because the pitches are so slow that the batsmen often swing in front of the ball.

In their second season, the Croughton team is set to play somewhere between 15 and 18 matches, and team members are realistic about their chances of winning.

The players are aggressive on the field, Florey said, but they&#8217;re really out there for the fun and the cultural experience. Cricket is a slow, social game that often includes a break for tea, and it provides a great way to spend a Sunday and meet people, he said.