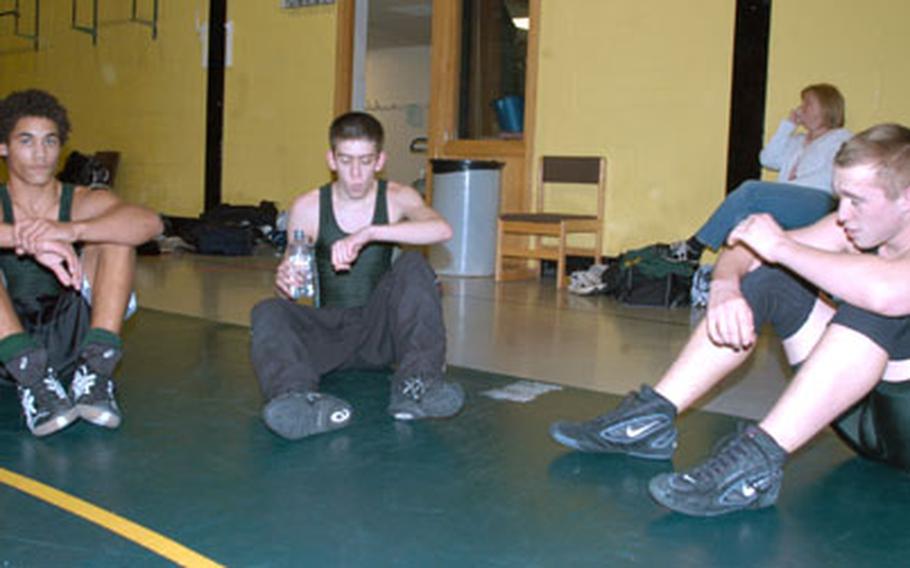 And his son may get a tattoo to prove it.

After two years at the helm of the Alconbury High School wrestling squad, Lucas is training three top-flight wrestlers who he believes have a legitimate shot of capturing a European title.

And two of the three are underclassmen, including his 15-year-old son, whose training may be rewarded with a bit more than success on the mat this year.

The coach, for his part, can&#8217;t afford to show favorites in a crop of such talent.

The eldest of the three is junior Douglas Bagnall. The 17-year-old Ohio native holds a 6-0 record at 189 pounds. He has been wrestling seven years and attended the Ohio State University wrestling camp last summer.

He has wrestled fewer matches than his younger counterparts because there aren&#8217;t many competitors in his weight class. But, he keeps his eye trained on his goal through strict dieting and disciplined conditioning.

Strength at the other end of the weight spectrum is how Lucas strikes a balanced lineup.

Sophomore Joshua Williamson opened the campaign with a 14-4 record wrestling at 119 pounds.

The 16-year-old South Carolina native has been wrestling for only two years.

The coach said he keeps the pressure on his boys.

What makes the coach unhappy?

When his team members eat junk food, chug soda and don&#8217;t give 100 percent in practice.

But is he harder on his son than the rest of the team?

Judging by his record, the coach has prepped his son well for the rigors of a grueling season. At 160 pounds, the 15-year-old Pennsylvania native has pounced on opponents on his way to a 12-1 record.

Alconbury High School hosts seven teams in its gymnasium on Saturday that will feature all of the United Kingdom schools.

All three will test their mettle against the top grapplers on the island as well as Iceland and Brussels, Belgium, a weekend before the European tournament kicks off at Wiesbaden, Germany, Feb. 17-18.