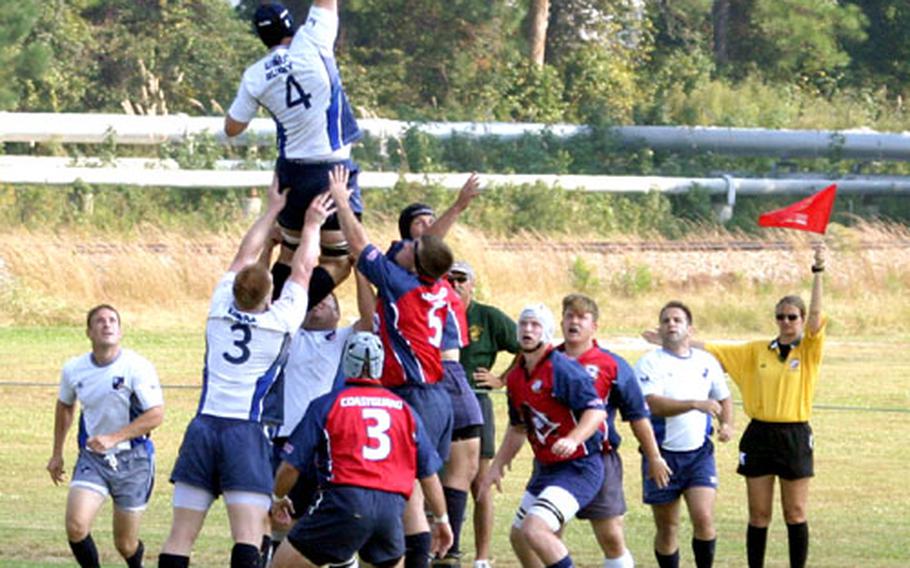 Capt. Wayne Kinsel is lifted up by his teammates as an out-of-bounds rugby ball is put back into play during the Armed Forces championships against Coast Guard last month at Camp Lejeune, N.C., where the Air Force team took first place. (Photo courtesy of Wayne Kinsel)

Capt. Wayne Kinsel is lifted up by his teammates as an out-of-bounds rugby ball is put back into play during the Armed Forces championships against Coast Guard last month at Camp Lejeune, N.C., where the Air Force team took first place. (Photo courtesy of Wayne Kinsel) 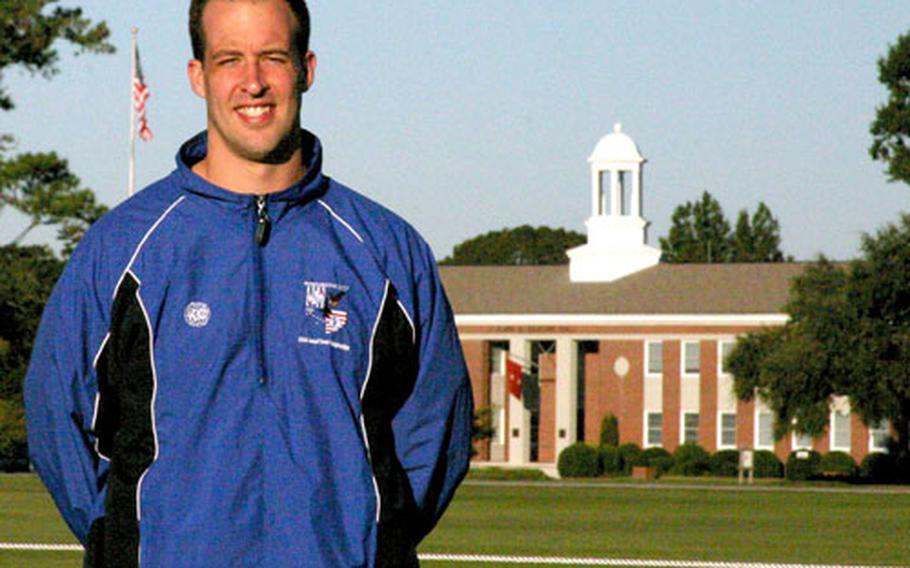 No pads, no problem.

Air Force beat Navy in this year&#8217;s military finals, taking their second straight title. Kinsel had five tries (scores) in the second half of the 46-14 win.

Kinsel hopes that the combined-services team, which runs Dec. 2-4, will do well against all-star teams from all over the United States.

Holliday said that Kinsel has what it takes to do well during the inter-territorial tournament.

Kinsel started playing rugby while he was a cadet at the U.S. Air Force Academy in the late 1990s.

Holliday, who played rugby with Kinsel in South Korea, said that those were some of the better years for academy rugby.

Rugby has become more than competition and full contact for Kinsel, though. His new wife, Brianna Huot, played rugby with him while he was stationed in North Dakota, and their wedding party was made up of rugby buddies.

Although England, South Africa and New Zealand are three of the world&#8217;s top countries for rugby, Kinsel said he&#8217;s seen it take root in the U.S.

The rules of the pitch

The basic game of rugby involves two teams trying to score as many points as possible by carrying, passing, kicking or grounding a ball into the goal area during the timed match.

In many ways it&#8217;s similar to American football, but there are no separate offensive or defensive teams, and substitutions are only made for injuries.

Grounding the ball in the goal area is called a try and is worth 5 points. After a try, a place or drop kick is used to get the ball over the goal posts for 2 more points.

A team member also can drop kick the ball over the goal during play for 3 points and penalty kicks are worth 3 points.

During play, the ball is run or kicked forward &#8212; it cannot be thrown forward, but can be thrown backwards. Play only stops when a try is scored, the ball goes out-of-bounds or for an infringement.

Out-of-bounds balls are thrown in while the two teams line up facing each other perpendicular to the touch-lines (sidelines) in an action called a line-out. One player is raised up by other players to catch the ball.

Infringements results in a penalty, free kick or a scrum. In a scrum, the forwards of each team lock together and push against their opposite numbers, trying to get the ball to their side, where it will be placed back in play.

More information about the Air Force Rugby team is available on their Web site at www.usafrugby.com. Those interested in taking part in Air Force tryouts next year can contact coach Lt. Col. Kenneth Holliday at: kgholliday@aol.com.