Sports: Airman is a gentleman in a brutal fight 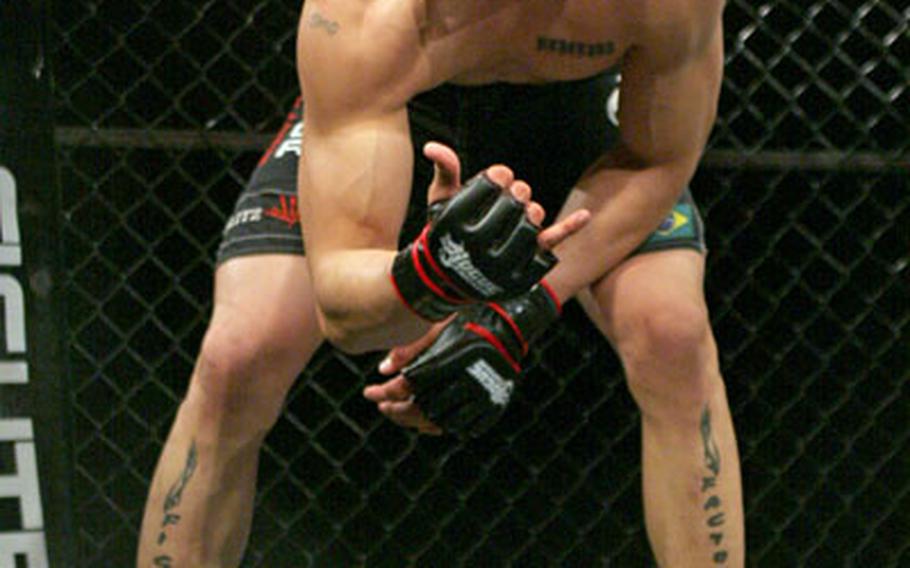 Staff Sgt. Pierre Guillette goofs around between rounds at a recent submission fighting event in Sweden, where he beat French fighter Laurent Bonafoux in a decision. (Courtesy of Tue Trnka)

There&#8217;s not a lot about Staff Sgt. Pierre Guillette&#8217;s appearance to suggest that he occasionally steps into a cage to fight in no-holds-barred &#8220;ultimate&#8221; fighting matches.

The tall, genial public health worker from RAF Alconbury doesn&#8217;t come off as a man who might spend his free time, well, strangling people into unconsciousness.

But there are subtle signs that he practices the art of beating people into submission. All the knuckles on one of Guillette&#8217;s hands were topped by raw, pink patches of missing skin recently, the aftermath of an intense session of hitting a punching bag, Guillette said.

But the 33-year-old is a bit of a chameleon &#8212; as a man named Pierre with Asian features and an American military uniform, he tends to be that way.

The son of a French immigrant and a South Korean national, Guillette first got into the sport when he picked up Thai boxing while living in Japan several years ago. Then he met a man connected with a submission fighting gym called Fight Factory in Philadelphia. He entered a grappling tournament not long after and took gold.

That decision put Guillette on the road to a side career in &#8220;ultimate&#8221; fighting &#8212; the submission combat often known from one of the first organizations to popularize it, the Ultimate Fighting Championship.

In ultimate-style fighting, two men square off in a roughly octagonal ring wearing only shorts and lightly-padded, fingerless gloves. Kicks, punches and holds of all sorts are allowed in an effort to render your opponent unconscious with a strike or a stranglehold, or compel him to &#8220;tap out,&#8221; which means to signal submission by tapping the mat.

Many fighters use mixed martial arts, a combination of disciplines such as Thai boxing, karate, judo, Brazilian jiujitsu and others, with some specializing in either the stand-up slugfest portion of the fight or the on-the-mat grappling.

Guillette said he picks a strategy based on his opponent, and his methods have been effective. In 19 fights since 2000, he has 13 wins, 5 losses and a draw. He also held the light heavyweight world title in an organization called Ultimate Combat and has been dubbed &#8220;The Professional&#8221; in the ring.

His most recent fight was Saturday in Wembley Stadium at an event called Cage Rage 17. He battled a Japanese man named Daijiro Matsui, who was a full 6 inches shorter than the 6-foot-3-inch Guillette. Guillette won by a technical knockout after he opened a large cut over Matsui&#8217;s eye with a knee strike delivered when the Japanese fighter tried to grab Guillette&#8217;s legs.

But as brutal as the sport often looks, especially to those new to it, Guillette said he hasn&#8217;t ever suffered any severe injuries in a submission fighting match.

Nor does he transform himself into a salivating animal before he gets in the ring, morphing Hulk-like into a flailing terror intent on inflicting tissue damage.

Instead, he does some breathing exercises and gets quietly focused before a fight.

Tue Trnka, a Danish reporter and photographer for a fighting magazine who knows Guillette from the circuit, said that kind of demeanor is part of what makes him &#8220;The Professional.&#8221;

Guillette admits it&#8217;s not a sport for everyone, particularly people averse to being punched in the face, though he personally doesn&#8217;t feel much pain during a match.