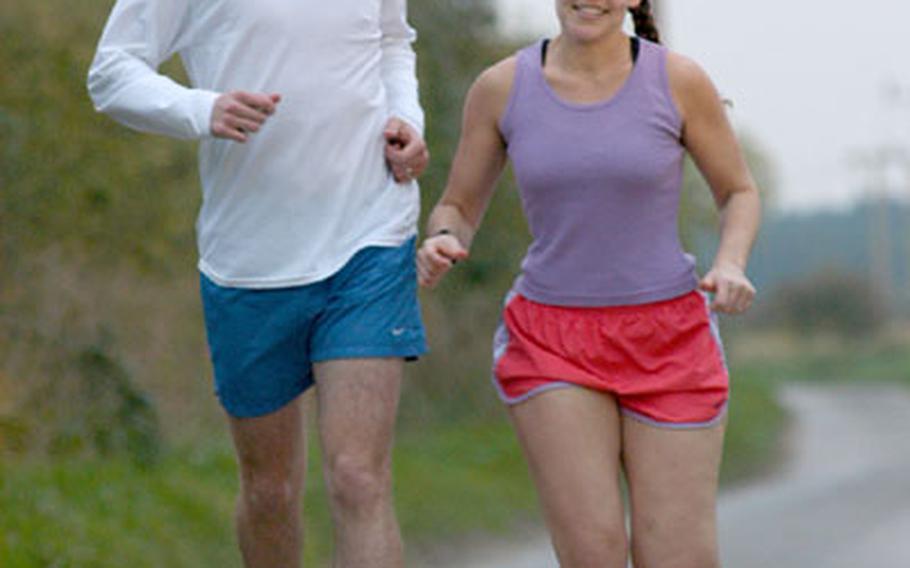 Staff Sgts. Jason and Monica Russi warm up for a training run recently in the final days before Oct. 31, when they plan to run the Adidas Dublin Marathon in Ireland. The couple is using the effort to raise funds for cancer research. (Ben Murray / S&S)

Staff Sgts. Jason and Monica Russi warm up for a training run recently in the final days before Oct. 31, when they plan to run the Adidas Dublin Marathon in Ireland. The couple is using the effort to raise funds for cancer research. (Ben Murray / S&S) Jason and Monica Russi don&#8217;t always take their greyhound, Atom, out for a run with them.

The husband-and-wife team at RAF Mildenhall will put their ability to outrun a greyhound to work for a good cause next week. They will be running to raise money for cancer research at the Adidas Dublin Marathon 2005 in Ireland.

Jason and Monica, both staff sergeants and air traffic control watch supervisors with the 100th Operations Support Squadron, said they have been training to take the 26.2-mile plunge since this summer, when they began running 30 to 35 miles a week.

But more recently, while surfing the Web site for the Dublin Marathon, Jason said he came across a link that inspired him and Monica to add another dimension to their upcoming run, one for Cancer Research UK.

Because Jason and Monica have family members who have battled cancer, the idea of making the marathon double as a fundraiser just clicked, Jason said.

The push for sponsorship, however, is just one part of preparations that have taken up much of what little time the pair is able to spend together.

Because they work at an air traffic control tower that operates 24 hours a day, the two are often on opposing day and night shifts, with just a few odd hours to spend together in between, Jason said.

In the week before the big race, both runners said they think their training has been enough to get them through the race &#8212; though not without a price.

On a 16-mile training run in September, Monica suffered a stress fracture in her foot, which has cut down her mileage in recent weeks. Jason, too, said he wasn&#8217;t positive he&#8217;d put in enough miles to make his sub-four-hour goal time.

The fundraising aspect has given the Russis something else to run for, they said. About a week before the race, the couple was still about $615 shy of their goal. Anyone interested in a last-minute donation can contact them at: Jason.Russi@Mildenhall.af.mil