Sports: A range of shooting activities available at center 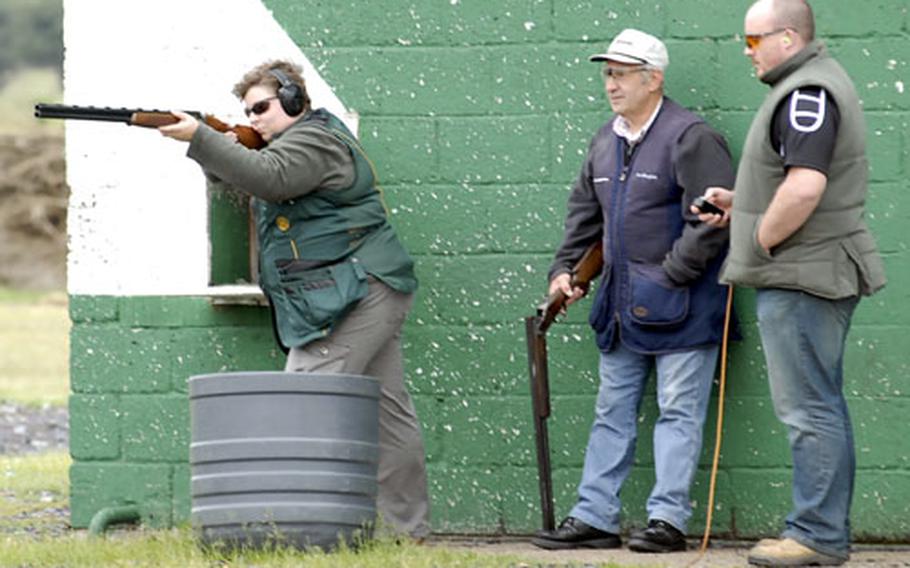 Jenna Keys takes aim at a clay pigeon during a recent visit to the Lakenheath Shooting Ground and Clay Target Centre while her shooting partner Peter Bloomfield looks on and her husband, Lewis Keys, operates the target pull. (Charlie Reed / S&S)

It makes a racket, to say the least. (Especially if you live close by.)

But once you drive down that gravel road to the Lakenheath Shooting Ground and Clay Target Centre just outside RAF Lakenheath, it&#8217;s easy to see that its patrons have fun.

The 100-acre site hosts shooting competitions and has two 120-foot towers and 21 sporting stands to suit a variety of shooters at different skill levels. The moving clay targets simulate driven, dropping or crossing birds, along with rabbits, in a variety of styles and colors.

"Companies bring their people in for a bonding day," he said. "It&#8217;s an informal way for management to talk to the people they&#8217;re trying to lead."

For novice shooters such as Fakenham resident Jenna Keys, the range also offers shooting lessons and gun and equipment rentals.

Keys recently took up shooting "for the challenge of it," she said.

She had never picked up a gun until earlier this year but has taken to the sport and now comes out to the range at least once a week.

On a recent afternoon, Keys&#8217; husband was on hand to watch his wife in action.

Though Keys&#8217; husband is short on tips for improving her aim, her shooting partner, Peter Bloomfield, has plenty of advice.

Safety is paramount, Bloomfield said. One of the most important things a sport shooter needs to remember is to remain calm when hitting targets, he said.

"Don&#8217;t get excited when you make a good shot and point your gun toward somebody or anywhere but downrange. Keep it simple, make it fun."

Bloomfield, of Ixwith, has been shooting for more than 20 years at the Lakenheath center, which was once American-owned.

"It&#8217;s a really friendly place," he said. "We used to get a lot of Americans, but, with the exchange rate, we realize it can be quite expensive."

For more information about the Lakenheath Shooting Ground and Clay Target Centre log ontowww.lctc.co.uk or call 01638-533-353.