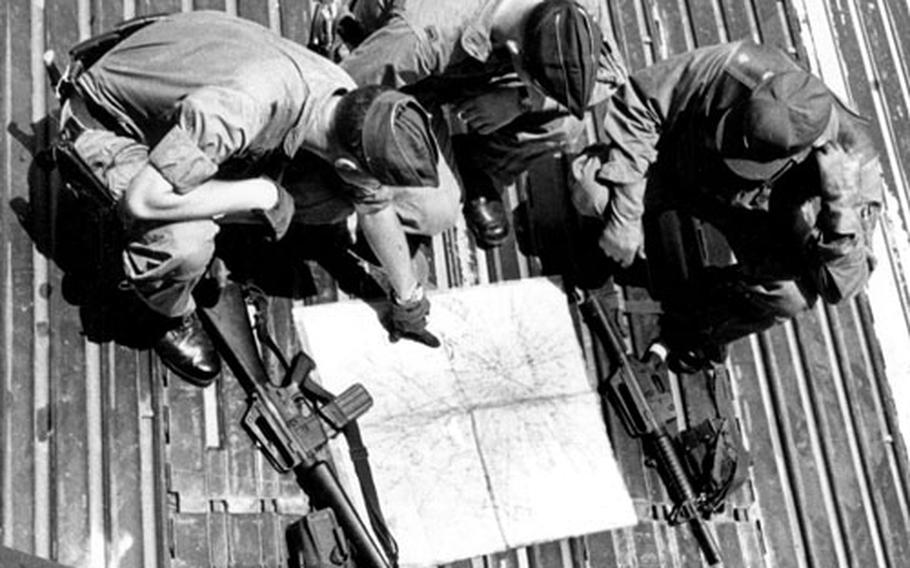 Buy Photo
A strategy session precedes the dropping of leaflets over South Vietnam in 1968. (Bob Cutts/Stars and Stripes)

Buy Photo
A strategy session precedes the dropping of leaflets over South Vietnam in 1968. (Bob Cutts/Stars and Stripes) 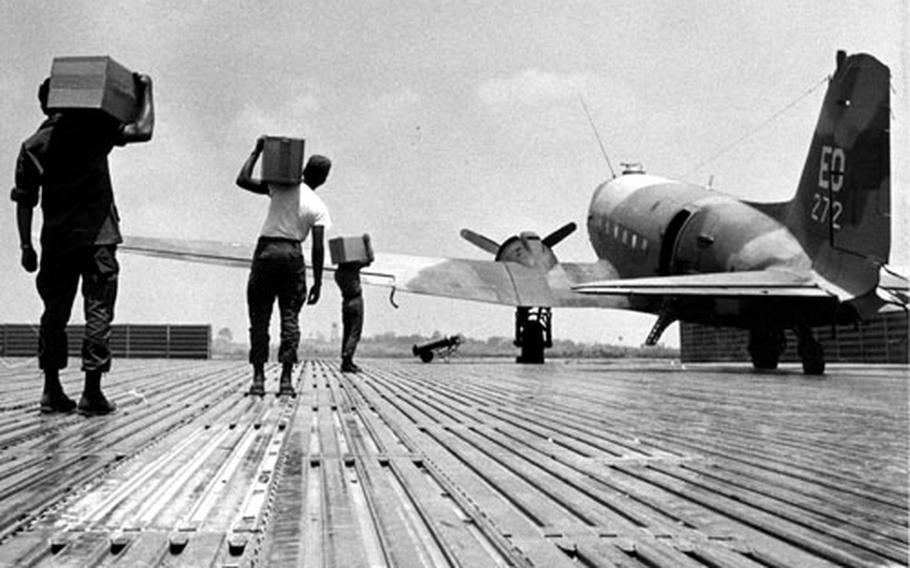 Buy Photo
Leaflets are loaded onto a plane. (Bob Cutts/Stars and Stripes) 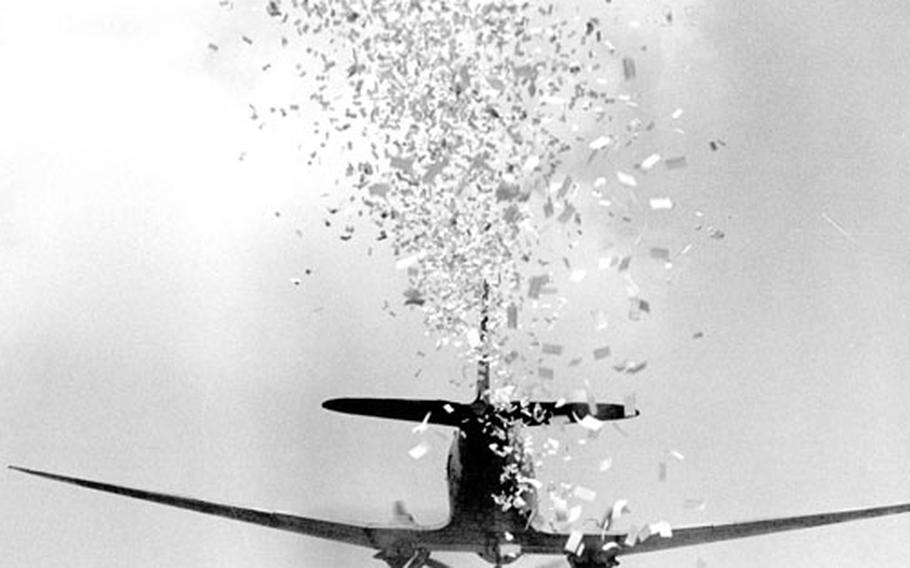 Buy Photo
The crew of an Air Force C47 Gooney Bird goes over the mission, loads the plane and drops leaflets in South Vietnam in 1968. (Bob Cutts/Stars and Stripes)

BINH THUY AB, Vietnam — The rain pelted them all and hid the Viet Cong battalion that was moving into position around Cai Cai Special Forces camp.

It was midnight and the Green Berets knew they could expect the attack from the vicinity of the nearby Cambodian border any minute now. There was no sky so there would be no air support. Just the unending rain.

But somewhere up there was a drone of engines, a plane circling in the night. Then it began — a long, unearthly wailing, coming out of the sky, filling Cai Cai and the soggy marsh around it with a gigantic voice.

A Vietnamese voice began calling names — the names of the Viet Cong battalion commander, his company chiefs and their platoon leaders. Each man was told that the Americans knew who he was, what he was doing, that he was being watched.

"We know exactly where you are," said the invisible voice, "and we know what you are doing. We are ready for you. If you come close enough to the camp, we will kill all of you. Our forces are ready and waiting for you. Will you be so foolish as to charge into certain death?"

This went on for hours. The attack never came. The VC battalion which might have claimed Cai Cai that night pulled out without a sound and disappeared in the night. There had been no reaction force, no "superior forces," no one watching. Just the voice, naming names and warning of death. It saved Cai Cai.

"Put yourself in their place," says Jerry Valentine "It's rainy and muddy; you're miserable anyway, and you know you've gotta go up there and fight your way inside that camp. Then this big voice comes outta nowhere, calling your name and telling you you're gonna die, over and over. You can't see anything; there's just this same voice, everywhere. You'd get pretty spooky, too."

First Lt. Valentine, 24, was the man behind the Cai Cai "ghost." He's the "old man" of the 5th Air Commando Sq. "C" Flight — the Binh Thuy AB unit that flies all Psy War missions over the Mekong Delta, in planes armed only with 10.000-volt speakers and tape recorders.

"We're always getting scrambled for stuff like that," says Valentine, who counts 11 months in Vietnam. "We never know where it'll be — sometimes we just go out at night and harass a VC unit. We just fly over them all night, keeping them awake and letting 'em know we know where they are. They get pretty harassed, all right."

And when they got harassed, Valentine and the other 5th AC pilots get shot at. "Night missions are the most frightening but the most interesting. In the daytime you can't see 'em shooting at you. But at night, you see all these big yellow balls coming straight up at you."

Valentine claims a record eight stars on his Red Max — the Max, an imitation of the famous German "Blue Max" valor award given in WW I, is an invention of "C" Flight commander Lt. Col. Chuck Baker. "It boosts morale," he claims. The Max, a red patch, is awarded for the first bullet hole in a flier's plane. Then, every other hit earns a "star" on the Max.

"So far none of us have been wounded, but there've been close calls," says Valentine.

He remembers a Jan. 17 mission in An Xuyen Province when a "thump" three feet behind him was a .50 cal. bullet ripping a hole in the plane. It tore out three hydraulic lines and all pressure went. The leaking fluid filled the plane with highly explosive fumes — and everyone was smoking.

"Get rid of your cigarettes!" yelled Valentine, and everyone dove for a window.

The landing gear fell partway down and the AC-47 Gooney Bird had to struggle at reduced speeds into 25-knot headwinds to get home. It took them an hour and a half to go 95 miles and any little spark in the plane could have set off the sick-sweet, volatile fumes, blowing her out of the air.

They finally set down at Binh Thuy, with copilot Lt. Col. Frank Johnson pushing frantically on a small hand pump to get up enough pressure to break the wheels. When they stopped, everybody jumped out and ran across the field, but she didn't go up.

Besides the tape missions, flown in the Gooney Bird and in small U-10 courier planes, the 5th AC dumps millions of leaflets all over the Delta — propaganda leaflets. "Chieu Hoi" (Open Arms) entreaties to the enemy, and general information — telling people to clear an operational area, or not to use a certain bridge that is under repair. "I guess we're 'the voice of the Delta'," says Valentine.

"But the tapes are best. We've got one we call the 'wandering soul' tape. It lasts about four minutes. It starts with Buddhist funeral music, then this spooky, wailing voice. Then a little child is crying, then the child is crying for its father. Then a Vietnamese woman comes on and tells how her husband was killed fighting for the VC.

"And all the time, this eerie background voice, wailing about death. It's a real beauty — guaranteed to raise ground fire anywhere. It even sends chills down my spine. It's so effective that even the government restricts use of it — they only let us use it in extreme occasions."