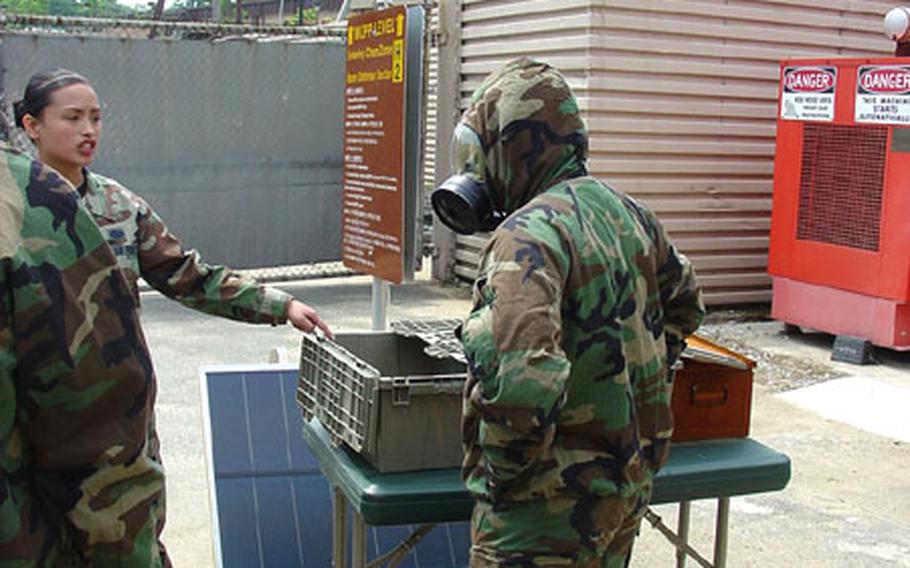 At Osan Air Base, South Korea, Airman 1st Class Karen-Ann Santiago of the 51st Civil Engineer Squadron, guides an airman through training last month in how to safely move from one part of an airbase to another under varied levels of chemical hazard. (Courtesy of USAF)

At Osan Air Base, South Korea, Airman 1st Class Karen-Ann Santiago of the 51st Civil Engineer Squadron, guides an airman through training last month in how to safely move from one part of an airbase to another under varied levels of chemical hazard. (Courtesy of USAF) 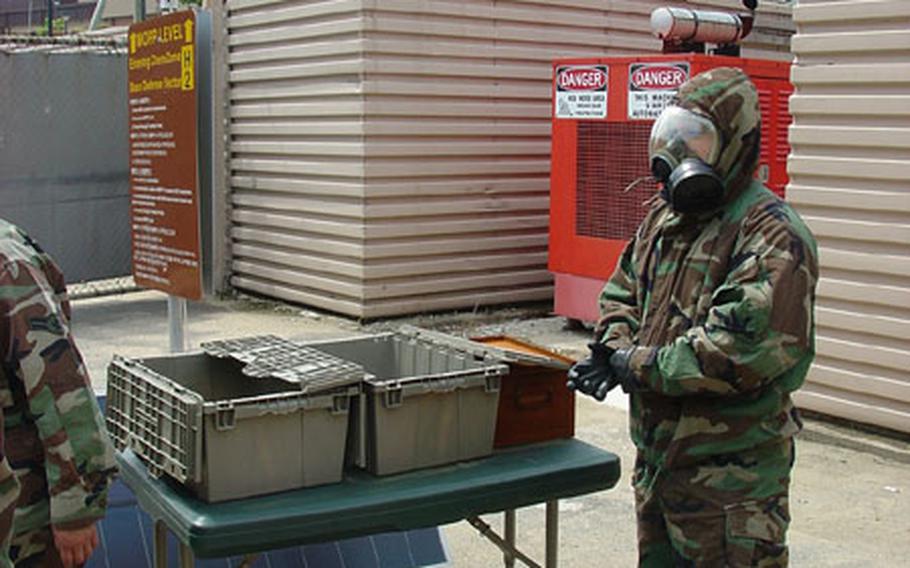 An airman at Osan Air Base, South Korea, practices correct wear of chemical warfare gear last month during training in how to move safely from one area of the base to another in the event of chemical attack. Airmen in South Korea will get fresh practice in chemical warfare procedures known as "split-MOPP" as part of a periodic combat readiness exercise next week. (Courtesy of USAF)

OSAN AIR BASE, South Korea &#8212; When it comes to chemical attacks, airmen here are about to take off the gloves.

Specifically, when the Air Force holds another periodic combat readiness exercise at Osan this week, many airmen likely will be able to switch far more quickly into less restrictive gear, minus those masks and gloves.

In past years, when Osan Air Base practiced responding to mock chemical attacks, the entire base would spend hot, cumbersome hours in full chemical protective gear, known as Level 4 of MOPP, or &#8220;mission-oriented protective posture.&#8221;

But testing, officials said, disclosed that after a chemical strike, contamination levels across a base may vary. Not everyone needs to be in full chemical-attack battle rattle. The result is what airmen call the &#8220;split-MOPP&#8221; method &#8212; aimed at returning as many airmen as possible to Level 2 gear as quickly as possible.

&#8220;Wearing everything is not only uncomfortable &#8230; but there&#8217;s the heat buildup and dehydration,&#8221; said Col. John Schiavi, 51st Fighter Wing inspector general. &#8220;So the sooner you can get folks out of that and down into taking the mask off and taking the gloves off they will be less encumbered from the wear of that, less likely to become dehydrated or overheat.&#8221;

Upon chemical attack, Osan officials said, the entire air base immediately must don MOPP 4, designed for the highest level of protection. It requires an overgarment, protective mask, hood, gloves, overboots, and field gear.

But the mask and gloves make it tougher to talk on the phone or work with one&#8217;s hands. Still, Schiavi said, &#8220;In the old days, and other places I have been, when the base was &#8230; simulated-attacked during these exercises, the whole base would go and react and put on their chemical protective equipment and then we would stay in that for hours on end, as if the entire base was contaminated with simulated chemical weapons.&#8221;

Under the split-MOPP system, a base is divided into zones. Trained teams of airmen would check each zone&#8217;s contamination level. &#8220;They get reports from all the different locations on base and they assemble those into a base map that shows where contamination or simulated contamination is showing up,&#8221; Schiavi said.

The wing commander then would decide whether to reduce the MOPP level in certain zones from 4 to 2, Schiavi said.

Signs at key &#8220;MOPP Transition Points&#8221; between zones would display a numeral indicating which of two MOPP gear levels are required &#8212; 4 or 2. The signs also would display detailed information in English and Korean on what MOPP gear airmen would need before entering the next zone.

The entire process, from a chemical weapon strike to when the MOPP level could be reduced, might run from 30 to 90 minutes, Schiavi said.

The faster any damage can be repaired, the more quickly working conditions can be returned to normal, &#8220;the more combat sorties we&#8217;re able to generate,&#8221; said Schiavi. Being able to move more airmen into less restrictive protective gear not only increases their comfort, he said, but also &#8220;adds up to supporting the wing and enabling us to do our job.&#8221;

At Osan Air Base, all newly arrived airmen must take a one-day class in nuclear, biological, and chemical hazards. The class includes about an hour&#8217;s instruction on split-MOPP, 20 minutes of it hands-on practice reading the signs airmen would encounter at the zone transition points, said Staff Sgt. William Stevens, who works with readiness training at Osan Air Base in the 51st Civil Engineer Squadron&#8217;s Readiness Flight.