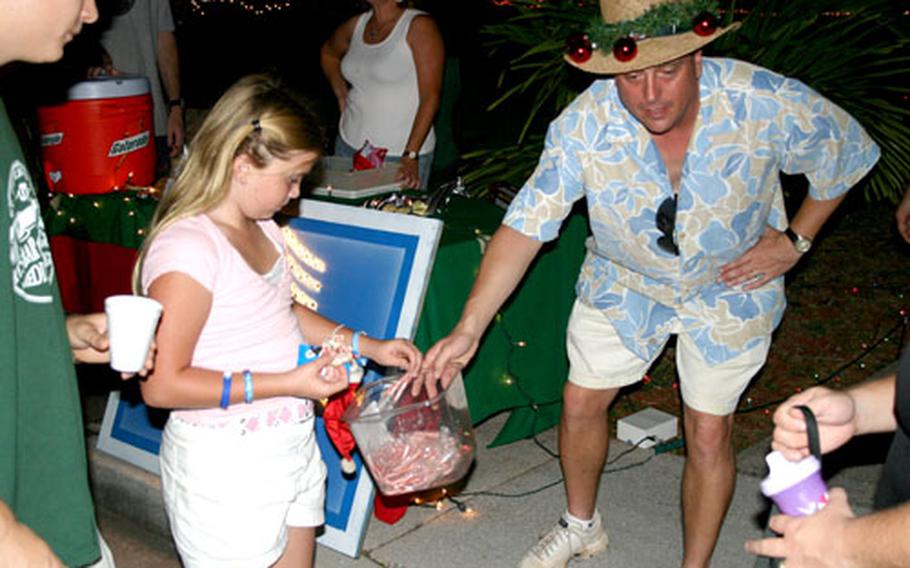 Lizzie Koorey, 9, picks out candy offered by Senior Master Sgt. Pete Tetreault. The walk in the base’s housing area is an annual tradition aimed at stirring up some Christmas spirit — even if it is 85 degrees and sunny. (Frank Whitman / Special to S&S)

Lizzie Koorey, 9, picks out candy offered by Senior Master Sgt. Pete Tetreault. The walk in the base’s housing area is an annual tradition aimed at stirring up some Christmas spirit — even if it is 85 degrees and sunny. (Frank Whitman / Special to S&S) 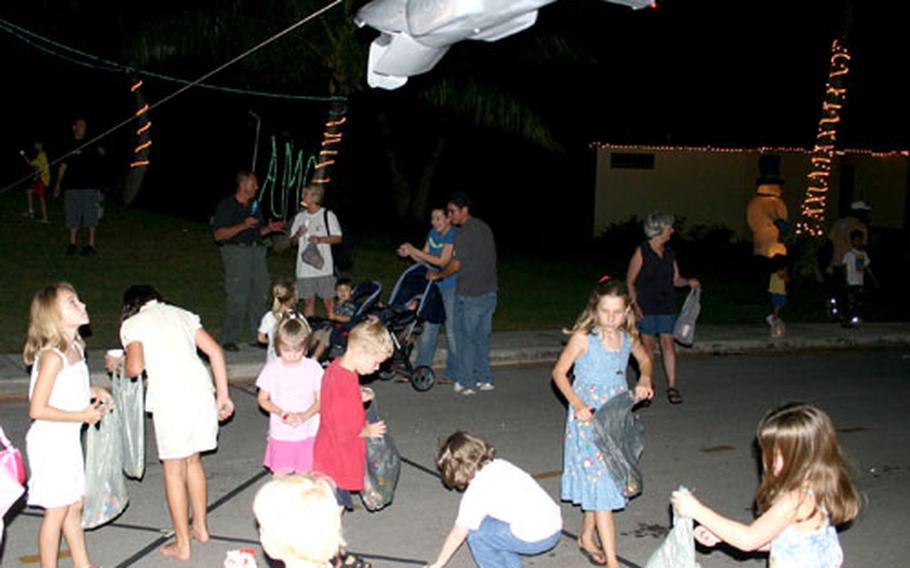 Youngsters scoop up candy dropped by a model C-17 operated by members of the 734th Air Mobility Squadron in front of the house of 734th commander Lt. Col. Keith Boone on Sunday during the Rota Walk at Andersen Air Force Base, Guam. (Frank Whitman / Special to S&S)

At Andersen Air Force Base, Guam, a white Christmas isn&#8217;t even a remote possibility. But residents still were deep in the holiday spirit Sunday night during the base&#8217;s annual Rota Walk.

Right after sunset, hundreds of people of all ages strolled along Rota Drive in the base housing area listening to Christmas music, visiting with friends, enjoying the lights and other decorations and picking up treats from Rota Drive residents sitting in front of their houses.

Luminaries &#8212; votive candles inside gallon water jugs &#8212; lined the curb on both sides of the street. Under a small canopy about midway along the walk, the Air Force Band of the Pacific &#8212; on Guam from Yokota Air Base, Japan, for the occasion &#8212; played Christmas music.

At the end of the walk, on the front lawn of home of Col. Michael Boera, 36th Air Expeditionary Wing commander, students from the base chapel&#8217;s Catholic youth classes acted out a Nativity play accompanied by a choir singing Christmas carols.

Though there was no formal contest for house decorations, unit pride was evident. Maj. David Hanson, commander of the Detachment 5 satellite tracking station, had an inflatable alien Santa on his roof and a satellite dish on the front lawn reminding passers-by that the the unit operates &#8220;your Santa Tracking Station.&#8221;

An ambulance with lights flashing was parked in the driveway of Lt. Col. Susan Davis of the 36th Medical Support Squadron beside a Santa stretched out in a hammock.

The chaplain&#8217;s house featured lights arranged in a cross and angels on the roof.

One of the most popular displays was the candy airlift in front of Lt. Col. Keith Boone&#8217;s house. Boone is the commander of the 734th Air Mobility Squadron. Members of his unit had constructed a model C-17 that slid down a guide wire strung across the the street and dropped a bucketload of candy onto the X in the middle of the designated drop zone, to the delight of children scrambling for their share of the treats.

Children and adults alike wandered from house to house sampling candy, cookies, fudge, cider and other goodies or collecting glow bracelets, fortune fish, Christmas pencils and similar trinkets. At several houses, tables were set up in yards, and groups of people were enjoying the company of friends and co-workers.

Guam&#8217;s climate lends itself to the outdoor Rota Walk tradition.

Previous commanders had told Boera, who assumed his present command in July, about the tradition.