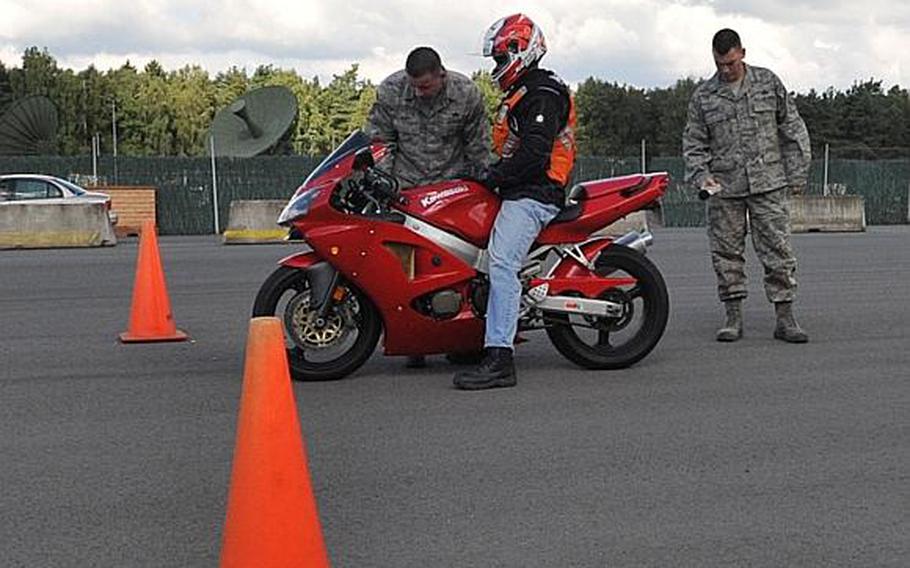 RAMSTEIN AIR BASE, Germany &mdash; Hundreds of Air Force motorcyclists at Ramstein were ordered to temporarily stop riding and attend a safety briefing Friday after a third airman in less than five weeks was killed in a traffic accident.

Air Force leaders said all three motorcycle fatalities involved experienced riders with the proper training certifications; they were wearing the right safety gear and no alcohol or substance abuse was involved.

&ldquo;By all appearances, they were doing everything right &hellip; and yet they still died,&rdquo; said Col. Stephen Lambert, 86th Airlift Wing vice commander.

The &ldquo;safety stand-down&rdquo; is intended to get riders&rsquo; attention, Lambert said, &ldquo;to shock them into thinking how serious this is.&rdquo;

The latest death was an Air Force noncommissioned officer killed in a head-on collision with a truck near Reichenbach-Steegen around noon Thursday, according to Air Force officials.

The memorial service for Air Force Master Sgt. Benjamin J. Kelly, 34, was Friday on Ramstein. Kelly died Aug. 28 after crashing his motorcycle into a bus on a rain-slicked road in Austria.

On July 31, Lt. Col. John Witherow, 39, was killed near Otterberg, Germany, after he lost control on a curve and crashed into a tree, according to Air Force officials.

All three crashes are still under investigation, Lambert said.

With this summer&rsquo;s deaths, Ramstein now leads all Air Force installations worldwide in motorcycle fatalities, base officials said. There have been 12 across the Air Force since the beginning of the year. Ramstein has more than 580 registered motorcycle riders.

Bikers were permitted to resume riding after attending one of the briefings.

Those at the first meeting were asked to consider road conditions, how proficient they are on their bike, and whether they&rsquo;re mentally and physically prepared to ride.

&ldquo;Ask yourself: Do you need to ride today?&rdquo; said Maj. Mark Yarian, 86th Airlift Wing chief of safety. &ldquo;Very rare do you get a second chance on a motorcycle, especially in Europe&rdquo; where the roads tend to be more narrow and speed limits are higher than in the States.

Riders can expect more training requirements. Yarian said that the wing would add a mentorship program, pairing up an experienced and new rider on a training ride over varied routes, from the autobahn to country roads.

&ldquo;Right now we have a canned training environment with tracks and cones,&rdquo; he said.

Bikers said Friday they understand why Air Force leadership is concerned by the recent fatalities, but they also said it feels like they&rsquo;re unfairly being singled out.

&ldquo;Any fatality is a loss for a motorcycle community. It&rsquo;s felt at the work place, on the home front,&rdquo; said Staff Sgt. Jason Hand, 33, a licensed rider since the age of 19. &ldquo;But when an individual dies in a car accident, you don&rsquo;t see everyone expected to attend remedial driver&rsquo;s education.&rdquo;

Staff Sgt. Chaunce Foster, 28, a member of a Kaiserslautern military riding club, said most troubling are the high ranks of the three riders who died. &ldquo;A lot of times you hear of young guys having tragic accidents. It gets our attention.&rdquo;