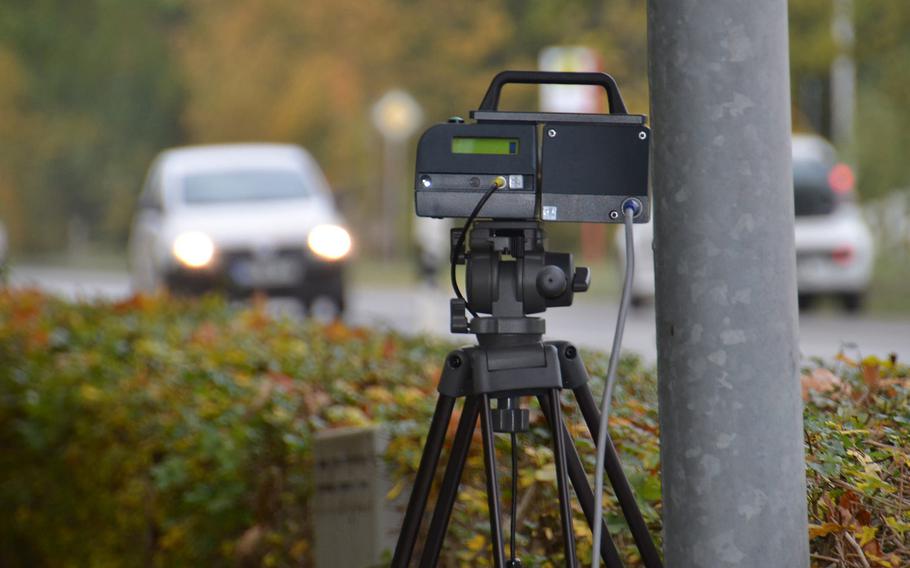 A speed camera enforces the speed limit on a German roadside. New traffic regulations that take effect Tuesday, April 28, 2020, in Germany say drivers who are caught exceeding the speed limit in town by 13 mph or by 16 mph on the highway, can lose their license for a month. (Polizeiinspektion Stade)

KAISERSLAUTERN, Germany — Exceeding the speed limit in town by just 21 kilometers per hour, or about 13 mph, could cost drivers in Germany a one-month license suspension and a hefty fine as of Tuesday, when tough new traffic laws take effect.

The suspension and fine would also apply to drivers exceeding the speed limit on the autobahn by 26 kph, or about 16 mph, in Germany, where about 35,000 U.S. service members are stationed.

Fines for double-parking, parking on the sidewalk or in a bike lane, and failing to leave a lane free on the highway for emergency vehicles will also go up under the new rules, many of which Germany’s traffic minister Andreas Scheuer said were intended as “protective measures for weaker road users,” namely cyclists.

Even stopping in traffic to let someone in or out of a car could result in a fine of at least 55 euros under the new rules, which were posted on the website of the German auto club ADAC.

Getting caught driving 10 kph, or 6 mph, over the posted limit in town will cost drivers 30 euros, up from 15 euros, as of Tuesday. Fines increase along with higher speeds beyond the limit.

On the highway, fines for exceeding the posted speed limit are 10 euros lower than in town, but they start at the same low speed — 10 kph above the limit. Speed limits are in force on around 40% of the highway system in Germany, which is the only country in Europe without a general speed limit.

Drivers who are caught parking their vehicle on sidewalks, in spaces for handicapped people or electric vehicles, or in bike lanes will be fined at least 55 euros. Prior to the rule change, the fines for such parking violations started at 20 euros.

But the sternest punishments are for drivers who fail to leave open a lane on the highway for emergency vehicles, or who drive behind an emergency vehicle as it makes its way down the “rescue lane.” Previously, doing either of those would have cost drivers 200 euros and two points on their license.

As of Tuesday, the fine for either is 240 euros, and a one-month license suspension, plus two points.

Motorists’ organizations and lawmakers were quick to criticize the new rules.

Alliance 90/Greens lawmaker Stefan Gelbhaar said the new rules were “sloppy and incomplete” in places, and Oliver Luksic of the pro-business Free Democratic Party told Der Spiegel newsmagazine that threatening to suspend someone’s license for a month if they drive 26 kph above the limit on the highway was “impractical and exaggerated.