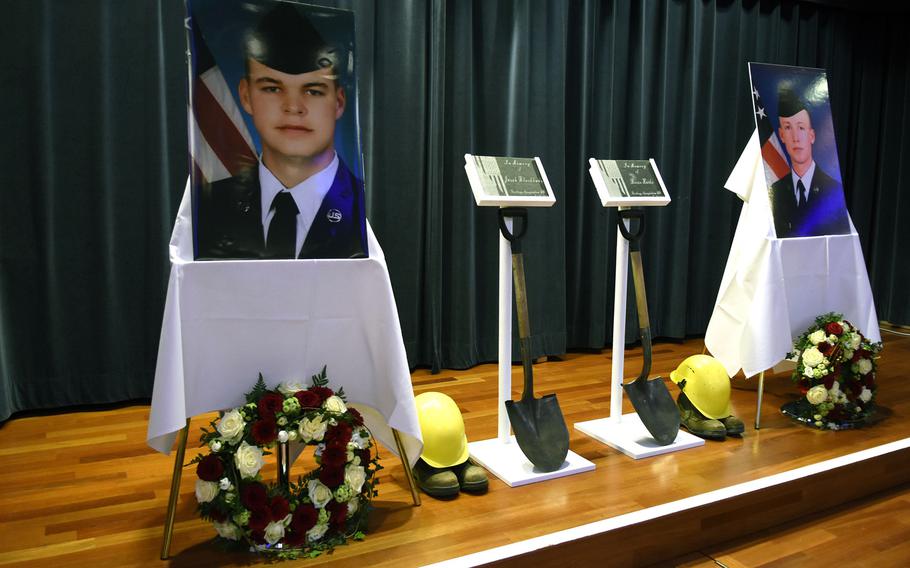 Buy Photo
A memorial tribute to Airman 1st Class Jacob A. Blackburn, depicted in the photo at left, and Airman 1st Class Bradley Reese Haile is held at Spangdahlem Air Base, Germany, on Oct. 22, 2019. Speed appears to have been a factor in the crash that killed the two airmen last fall, base officials said in a statement on Wednesday, April 29, 2020, citing an accident investigation report. (Jennifer H. Svan/Stars and Stripes)

KAISERSLAUTERN, Germany — Excessive speed was a factor in a car crash that killed two airmen and injured a third last fall on Spangdahlem Air Base, Air Force officials said Wednesday, citing a monthslong investigation into the accident.

The car in which airmen first class Jacob Blackburn, 20, and Bradley Reese Haile, 19, died Sept. 30 “appeared to be traveling at a high rate of speed and was out of control when it” struck a construction vehicle parked at the side of the road, officials at Spangdahlem said in a statement.

The two died at the scene of the crash, which occurred near the base’s passenger terminal. Airman Basic Justin Carpenter was injured seriously in the accident but survived.

The accident investigation found that the car was traveling at about 125 kph — about 77 mph — a base spokeswoman told Stars and Stripes. The speed limit on the road is 70 kph — about 43 mph.

The vehicle was traveling south on Langley Road on the base’s east perimeter about 10 a.m. when the crash occurred.

The airmen did not appear to have any drugs or alcohol in their systems, the spokeswoman said.

Base officials declined to say who was driving and denied Stars and Stripes access to the redacted investigation report without a Freedom of Information Act request.

An investigation board comprised of Spangdahlem Air Base members compiled the report using witness accounts and accident reconstruction analysis, officials said. The report’s findings will be incorporated into training and procedures at Spangdahlem “in order to enhance safety,” the base said in a statement.