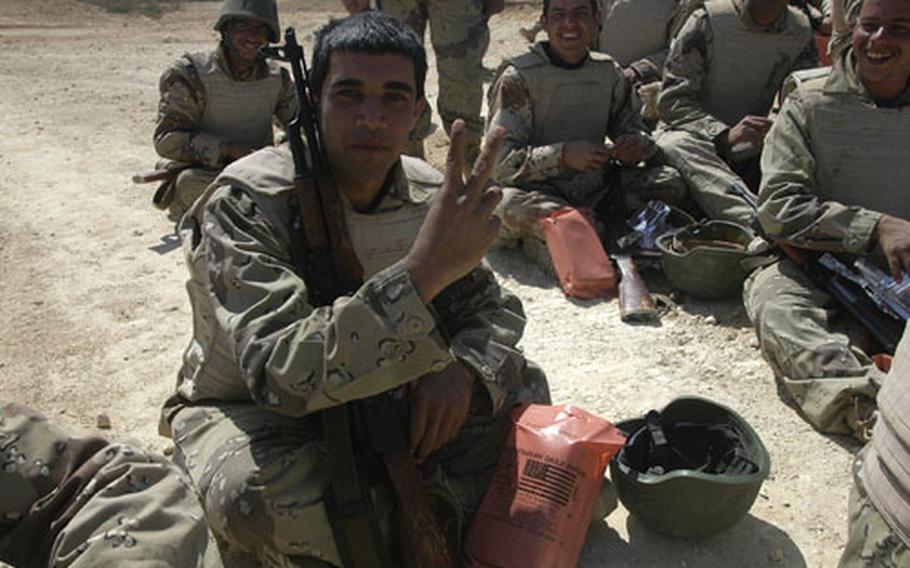 So, to build up needed skills for the [/BODY]jundis, or Iraqi privates, a U.S. Military Transition Team, or MiTT, based with the Iraqi 3rd Brigade, 7th Infantry Division gives an additional 10-day crash course in infantry skills, taught by both U.S. Marines and Iraqi instructors.

The course covers basics, such as mounted and dismounted patrols from Humvees; shooting a machine gun from a turret; how to raid a building; and how to conduct vehicle and personnel searches, said Altan, a platoon sergeant with the Scout Sniper Platoon, 2nd Battalion, 3rd Marines.

He was transferred from his own platoon to the MiTT to help build the Iraqi School of Infantry at Camp Yassir, part of the larger Al Asad Air Base.

&#8220;Normally, the School of Infantry is 10 weeks [in the U.S. military]. We&#8217;ve developed an intense program that in 10 days, we can teach all the important things,&#8221; said Altan, who has spent 10 years in the U.S. Marine Corps and served six with his native Royal Dutch Marines.

About 20 percent of the instruction takes place in a classroom, while the remaining 80 percent is done on the range or in the field, said Maj. Frank Simmons, the MiTT operations adviser. &#8220;Iraqis learn more by doing,&#8221; Simmons said. &#8220;With the hands-on practical stuff, they tend to do better.&#8221;

The training varies greatly from what Iraqi soldiers had received under the old regime, said Iraqi Chief Warrant Officer 4 Ali al Shimaree, 34, one of a handful of Iraqi instructors.

The 100 students now midway through their 10-day course training at Camp Yassir, named after the first 3rd Bridge Iraqi soldier killed in the line of duty, make up the second School of Infantry class. The first had 36 students, and MiTT and Iraqi leaders are working to build the program to accommodate upward of 400 students, Simmons said.

Once trained, soldiers will join one of three battalions fighting in areas that stretch from Hit to Haditha, he said.

For the most part, the students fare well, he said.