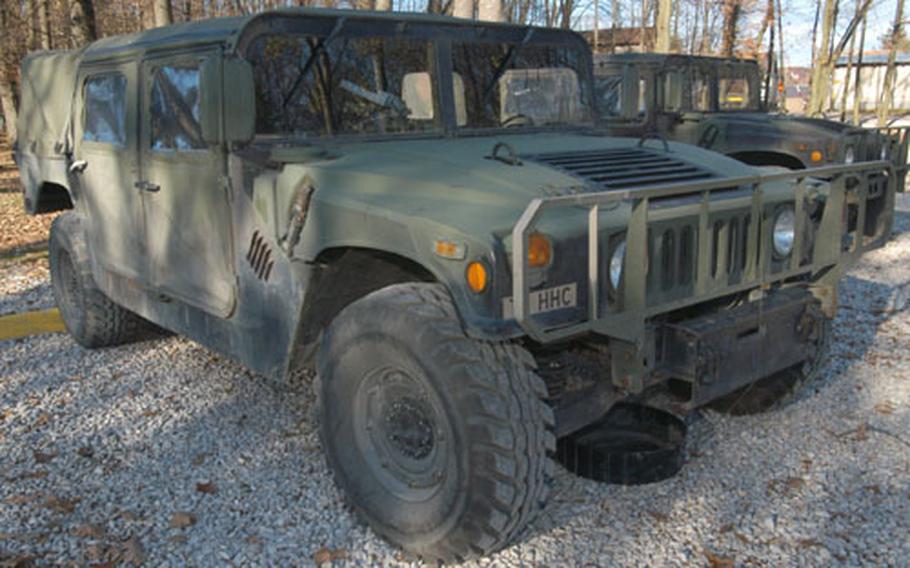 Shown is a Humvee without special armor at Eagle Base, Bosnia and Herzegovina. So-called "up armored" Humvees are being sent from Europe to Iraq to keep U.S. troops safer from attacks. (Ivana Avramovic / S&S)

STUTTGART, Germany &#8212; The U.S. European Command has shifted roughly 600 specially armored Humvees to Iraq, where they will be used to fill a shortage of the urgently needed vehicles, according to a Pentagon spokesman.

Most of those vehicles, which began being moved in July, have come from the Balkans, said Army Maj. Gary Tallman, a Pentagon spokesman.

The shift is part of a plan to get nearly 3,000 of the specially outfitted Humvees to Iraq, where they can protect U.S. troops from insurgents using conventional firearms, improvised bombs and grenades that can cripple a regular Humvee.

Of the roughly 120 U.S. combat-related deaths in Iraq since May 1, about 30 were the result of attacks on vehicles either by a bomb or small-arms fire.

Tallman said that an armored Humvee, which costs about $150,000, is a &#8220;specialty&#8221; vehicle that historically has not been relied upon as much as it is needed now in Iraq.

The race to get more armored Humvees into Iraq has been accelerated by a $177 million appropriation to purchase vehicles. The appropriation is part of the $87 billion supplemental funding bill for operations in Iraq and Afghanistan. Most of the vehicles will go to Iraq.

The $177 million will buy about 1,200 armored Humvees. But the Ohio-based company that builds and adds armor to the Humvees can produce only so many of the vehicles at once, Tallman said.

An armored Humvee has a 2-inch-thick windshield and windows and a metal-composite skin that can stop bullets. The underside, front and rear are also reinforced for protection against mines and grenades.

According to the company that produces the armored Humvee, American Motors General, the idea is that, although the vehicle may be destroyed, the occupants would survive the attack.

American Motors General makes the Humvee, and one of its subsidiaries installs the armor package. It takes about four days to add armor to a Humvee.

O&#8217;Gara-Hess & Eisenhardt, which installs the armor, usually produces about 30 a month. Company officials said they hope to more than double production to 80 a month beginning this month, and to produce as many as 220 a month by the spring.

Still, even at the increased production pace, U.S. Central Command, which directs operations in Iraq, may not have all the armored Humvees it wants until next fall.

The command began pleading for more of the vehicles this summer.

In May, according to Tallman, there were 235 armored Humvees in Iraq. By August, CENTCOM wanted 1,233 of the Humvees in Iraq, and by September that request had shot up to 3,000, he said.

According to the Defense Department, when CENTCOM made its initial request, there were about 3,100 of the armored Humvees in its entire inventory.

Tallman said he does not know which units will be getting the armored Humvees.

In the meantime, troops on the ground are improving their existing Humvees with sandbags and plywood boxes to give themselves extra protection.

Sandbags are placed on the floor to absorb part of a blast coming up from the road, and plywood walls are erected across the open back of a Humvee to offer some shelter from bullets and other flying objects.

&#8220;We needed those vehicles yesterday,&#8221; said Staff. Sgt. Michael Perez, military policeman who in August was stationed at Camp Bukka, a prisoner of war camp, in southern Iraq near the Kuwaiti border.

Perez said troops are &#8220;constantly&#8221; on edge because they know the Humvees they have will not stop a round from an AK-47 assault rifle and are especially vulnerable to mines and grenades.

The movement of armored Humvees out of the Balkans has been an easy transition, according to officials there.

&#8220;The Army is looking at administration and staff sections [in Bosnia and Herzegovina] that really don&#8217;t have a need for these [armored] Humvees,&#8221; said Army Capt. Chuck Traxler, a spokesman for U.S. troops in Bosnia.

&#8220;The environment in Bosnia is fairly stable compared to other areas,&#8221; he said, and noted that the public affairs office has three armored Humvees that have not been used in 18 months. Those vehicles are earmarked for Iraq.

He said some armored Humvees would remain and would be used for patrols. Those that are being sent to Iraq would be replaced with conventional ones, he said.