Specialists work together to aid women with bladder issues 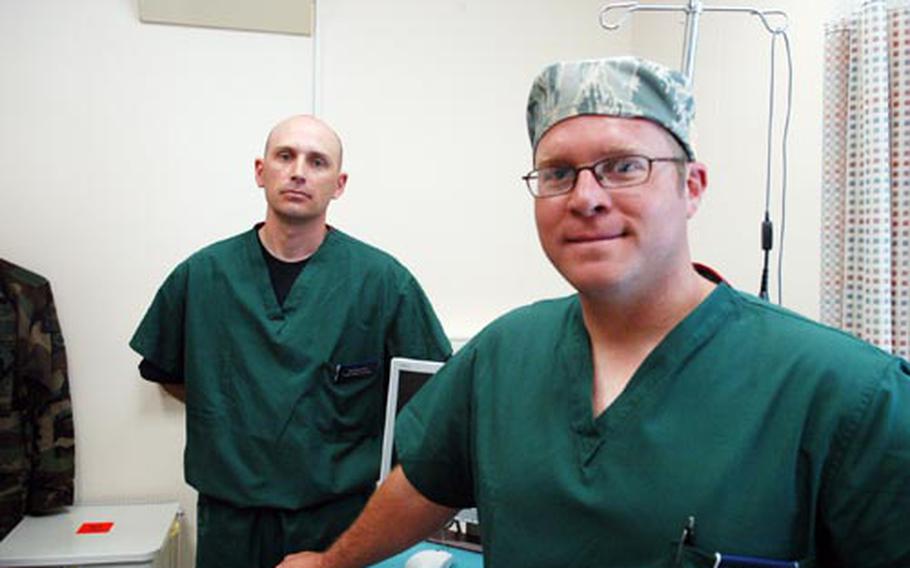 In order to simplify treatment, Lakenheath hospital&#39;s urology and gynecology clinics will merge their skills to better treat female incontinence. The idea is the brainchild of Dr. (Maj.) Steven Baughman, right, and will make diagnosis and treatment of female bladder control issues more of a one-stop affair. Baughman and Staff Sgt. Shaun Back, background, the head sergeant for the clinic, along with their gynecology counterparts, will start seeing patients under the new system in September. (Geoff Ziezulewicz / S&S)

RAF LAKENHEATH &#8212; Visits to the doctors are often for embarrassing ailments we wouldn&#8217;t share with anyone else. But hey, they&#8217;re doctors. It&#8217;s what they do. And two specialists at the Lakenheath hospital have devised a way to make women&#8217;s bladder control issues a bit easier to deal with.

Starting in September, the urology and gynecology clinics will merge to better serve women who have bladder control problems.

The point is to give patients a one-stop clinic to deal with the embarrassing disorder. No longer will they have to go to various offices and appointments. Patients will come in and get all the required evaluations the same day to determine the best course of treatment, said Dr. (Maj.) Steven Baughman, chief of urological services for the 48th Medical Group.

This merging of two similar disciplines is a first for the Air Force, he said.

"It is exceedingly common and a difficult diagnosis to bring up," Baughman said of female bladder incontinence. "We want to break the ice for them a bit."

A variety of issues can lead to bladder control problems in women, he said, from child birth to weight or neurological problems.

Up to 50 percent of women are believed to be affected by bladder control issues in some way, Baughman said, but only about 20 percent seek help for "active leaking problems."

Baughman said he and his gynecological counterpart, Dr. (Capt.) Edgar LeClaire, see about 80 cases a year out of the local community.

Women need to get any bladder control problem checked out because it can sometimes be indicative of a bigger problem, he said.

The merging requires no extra funds, he said, and may be replicated across the Air Force if successful.

"We may be the litmus test," he said.