Specialists to make ‘house calls’ to clinics in Bavaria 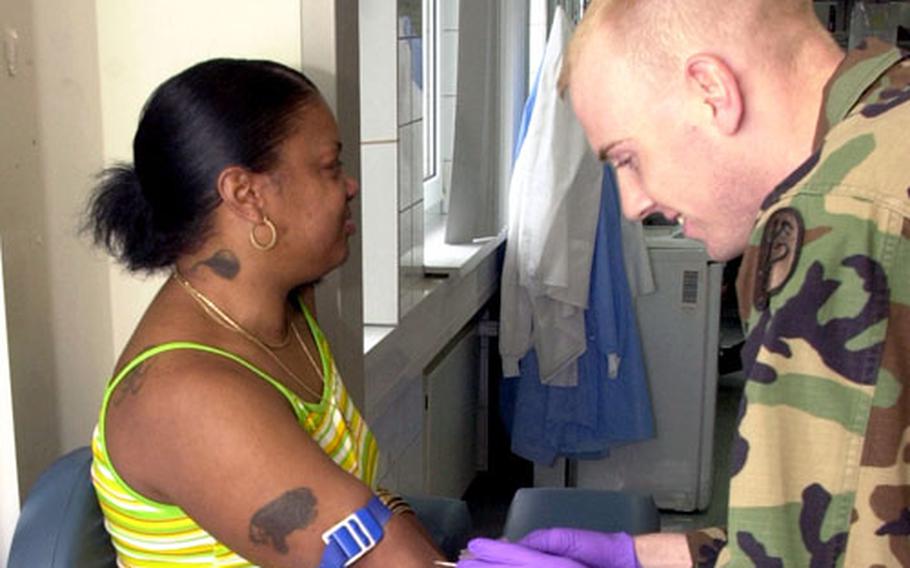 The European Regional Medical Command is planning to have specialists from its hospitals make scheduled “house calls” to nearby clinics so U.S. patients still will be seen by uniformed doctors as often as possible as transformation brings changes to the location of Army bases in Europe. At one of those clinics — in Baumholder, Germany — Sgt. Donald Mason prepares to take blood from April Roserie in 2004. (Stars and Stripes)

U.S. patients in Bavaria next year will have greater access to American doctors under a plan by the European Regional Medical Command.

Parents in Bamberg who need a baby doctor, for example, could schedule an appointment with a military pediatrician at their local clinic instead of relying on a German doctor.

&#8220;Our goal is for patients to be seen by uniformed personnel as much as possible,&#8221; said Col. Neil Maher, deputy commander of the medical command.

The command plans to do the same at clinics near the hospitals in Landstuhl, Germany, and Vicenza, Italy, but at a later time.

Those areas, along with Grafenw&#246;hr, will make up three major Army hubs in Europe once the shuffling of units and personnel in Europe is completed.

Plans for Landstuhl, near the Kaiserslautern and Ramstein installations, and for Vicenza won&#8217;t be carried out until there is a clearer picture of where personnel and clinics will be stationed under the Army transformation, according to Jeri Chappelle, a medical command spokeswoman.

Under the transformation, the population of soldiers in Europe is expected to be reduced from about 62,000 soldiers to 24,000 by around 2010.

Around Grafenw&#246;hr, military doctors would be sent to treat patients at outlying clinics in Bamberg, Schweinfurt, Illesheim, W&#252;rzburg, Katterbach, Hohenfels and Vilseck.

Expansions to some of the clinics have already been made or are ongoing, Maher said.

Specialists who would be making the local visits include pediatricians, psychiatrists, optometrists, audiologists, physical therapists and internists.

Caffrey said the driving time needed by doctors to visit the clinics shouldn&#8217;t be an issue.

Examination rooms at the clinics are being made as similar as possible so doctors would feel familiar with the surroundings in each locale, Caffrey said.

He added that some traveling is already taking place. Nutritionists from the W&#252;rzburg hospital drive to Grafenw&#246;hr to serve customers, for example.