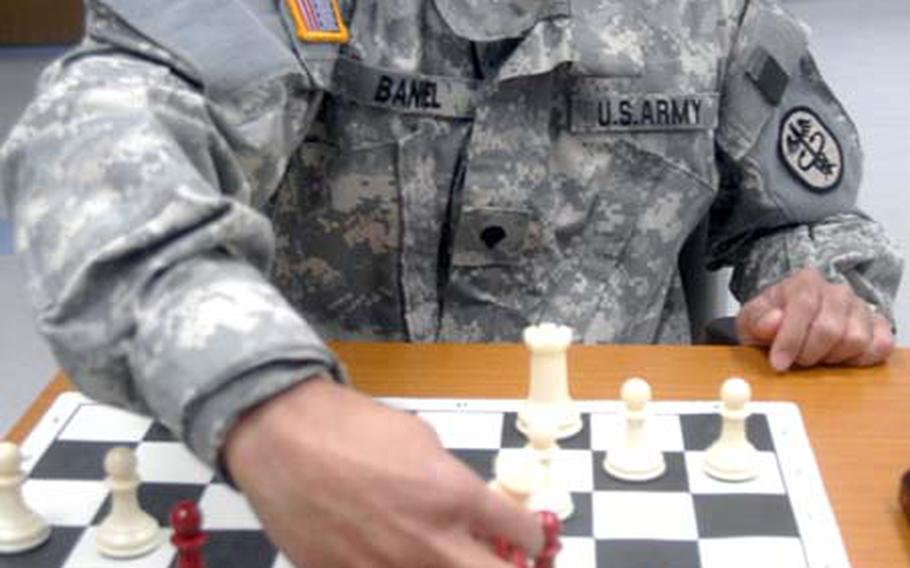 A gaggle of the U.S. military&#8217;s best strategic thinkers gathered at a desert air base earlier this month and engaged in the ultimate war game.

But instead of positioning jets, ships and troops, they maneuvered pawns, rooks, queens and the other pieces involved in chess.

Soldiers, sailors, airmen and Marines matched wits from June 9-13 at Davis-Monthan Air Base in Arizona for the 2008 U.S. Armed Forces Interservice Chess Tournament.

And a specialist from Landstuhl Regional Medical Center took the crown in the seven-round tournament, beating an Air Force colonel.

Baniel earned a spot on the six-member U.S. military team that will play in the NATO chess tournament this August in Brussels, Belgium. Three airmen, one sailor, one Marine and Baniel will represent the U.S. military in the tournament.

At one point in the final match, things did not look good for Baniel.

After losing the pawns, Baniel launched an attack against Echaure, sacrificing a bishop.

As in war, knowing your enemy to employ the proper strategy is crucial in chess. Airmen sent e-mails to Baniel after his chess games in the all-Army tournament this May, analyzing his game. Baniel was familiar with Echuare&#8217;s style from scouting his play.

Being able to think several moves ahead is also key, Baniel said.

"It&#8217;s not much about how many moves (you can think ahead) but how you conduct a certain plan," he said. "Sometimes you can only think one or two moves straight out or a combination that only requires three moves. You just have to plan where the game should be heading, strategize. At the same time, prevent your opponent from accomplishing his or her plan."