Specialist's knowledge of seven Arabic dialects paying off for others, too 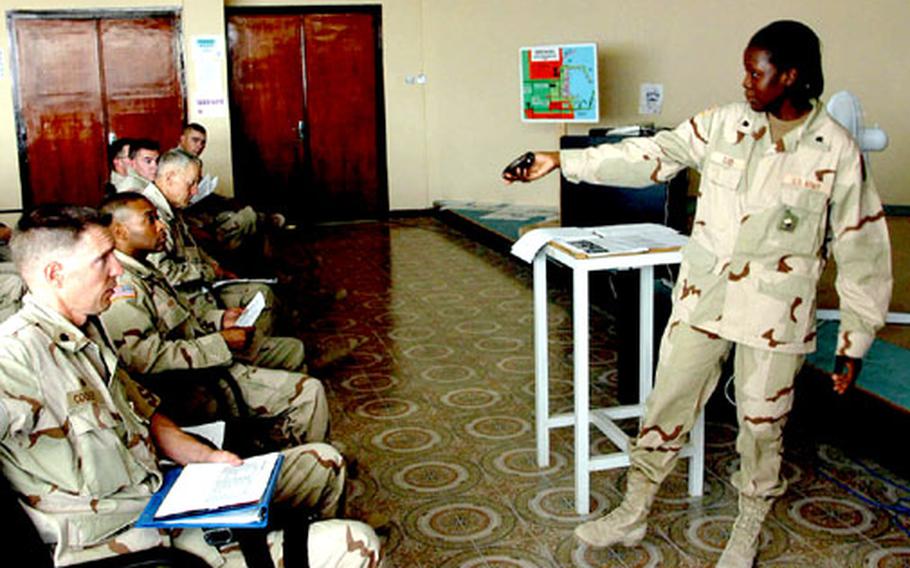 SHUAIBA PORT, Kuwait &#8212; Bubbling with vigor, 24-year-old Army Spc. Suzan Oliver can tell a general to keep his feet on the floor and force a major to tell her how old he is &#8212; as long as she says it in Arabic.

Oliver isn&#8217;t an ordinary Army crane operator. Born in Sudan and raised in Saudi Arabia, Egypt and later the United States, she speaks seven dialects of Arabic, as well as English, French, Sudanese and Swahili.

And even though her transportation battalion went home two weeks ago, Oliver is staying in Kuwait for another year to work as a translator for civil affairs soldiers at Shuaiba Port. She also teaches Arabic to fellow servicemembers.

&#8220;Spc. Oliver is a godsend,&#8221; said one of her students, Maj. Cliff Crawford, port operations officer, from the 143rd Transportation Command.

Oliver began translating for the Army during the region&#8217;s Bright Star exercise two years ago. She couldn&#8217;t be an official translator because she wasn&#8217;t a U.S. citizen.

So she became a crane operator with a skill identifier &#8212; a Department of Defense seal of approval that allows her to work as a translator on the side. The identifier label translates into $100 extra pay per month.

When the port&#8217;s civil affairs team lost two civilian translators to other assignments, it started to tap Oliver&#8217;s skills. She did translations for civil affairs during the war, then transferred to the unit in April.

About 95 percent of the paperwork for the port is in Arabic, so Oliver isn&#8217;t idle.

&#8220;It&#8217;s much easier dealing with a military person than a civilian working for the military,&#8221; said Sgt. 1st Class George McGill, a civil affairs reservist with the 143rd Transportation Command, where Oliver now works. &#8220;She knows the military standards.&#8221;

Oliver&#8217;s language skills get a real workout at the keyboard, as she types up memos in both English and Arabic. The languages use keys differently, so in addition to a different script, the typing takes a different pattern.

The best part of the job, she said, is accompanying her commanders to Kuwaiti functions. She&#8217;s been out to dine with Sheik Dr. Subah al Jaber al-Subah, third in line for the Kuwaiti throne and administrator of the ports. He speaks English, but she accompanies the Army officers in case a word or two gets confused.

Her knowledge also comes in handy in cultural matters. For example, she has advised Americans to avoid crossing their legs, which points the feet at someone &#8212; considered very rude. She also has shown them how to eat the traditional Arabic way &#8212; without utensils.

Speaking even a little of the language helps Crawford work with Arabic-speakers, he said.

Crawford picked up a little of the language while in Iraq during the war.

Oliver decided to offer Arabic classes because people frequently stopped her to ask about pronunciation and vocabulary. The officer in charge of civil affairs suggested the class that was born about three weeks ago. She teaches about 20 people from all service branches twice a week for a month.

Oliver joined the Army to help pay for college. But when she separates from service next summer, she intends to return to Kuwait and work as a translator.

That&#8217;s the main reason she volunteered to stay in the region, while friends returned home.

Being in Kuwait keeps her occupied, she said.