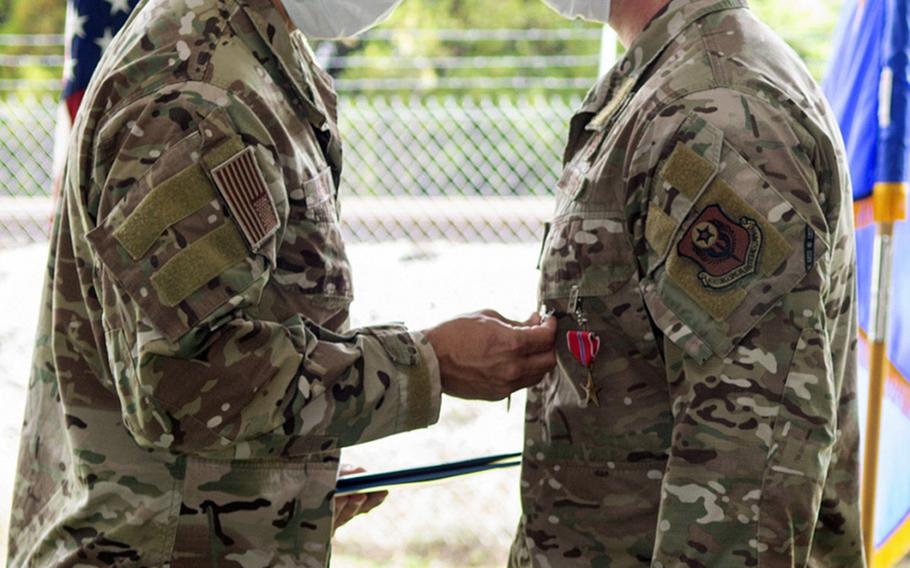 A Bronze Star Medal is presented to an Air Force Special Tactics operator from The 21st Special Tactics Squadron assigned to Pope Field, N.C. The squadron held a ceremony July 24, 2020, to present over 90 awards for the squadron's most recent deployment in 2019. (Heather Britton/U.S. Air Force)

A Bronze Star Medal is presented to an Air Force Special Tactics operator from The 21st Special Tactics Squadron assigned to Pope Field, N.C. The squadron held a ceremony July 24, 2020, to present over 90 awards for the squadron's most recent deployment in 2019. (Heather Britton/U.S. Air Force) 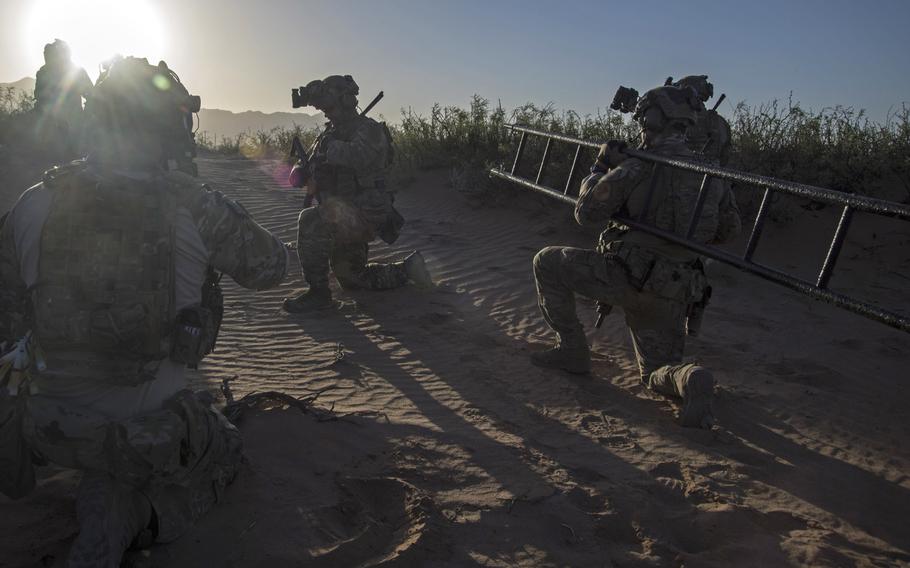 Airmen with the 21st Special Tactics Squadron prepare to infiltrate a compound during training at Fort Bliss, Texas in 2018. The squadron held a ceremony July 24, 2020, to watch the presentation of over 90 awards for the squadron???s most recent deployment in 2019. (Sandra Welch/U.S. Air Force)

Family and friends of 21st Special Tactics Squadron members gathered at Pope Field, N.C., last week for a public awards ceremony that began by recognizing the squadron’s airmen who served in Afghanistan in 2019. They were the primary tactical planners and intelligence, surveillance and reconnaissance taskers on 241 raids, and controlled nearly 5,000 aircraft, coordinating over 622 airstrikes — more than 230 within “danger close” range, a statement said Wednesday.

“In many ways, it’s the greatest adventure to put yourself on the line,” said Lt. Col. Randall Harvey, the unit’s former commander, was quoted as saying at the July 24 ceremony. “For some of you, that line was a razor’s edge between life and death.”

For its part in operations since 9/11, Special Tactics has been more highly decorated than any other Air Force community since the Vietnam War.

Last year, the 21st STS team in Afghanistan engaged in 235 firefights with “hardened Taliban and ISIS-K” fighters, the statement said, referring to the local Islamic State affiliate. They took nearly 1,900 enemy fighters off the battlefield, it said. For their efforts, the service awarded 16 Bronze Star Medals, including four with Valor devices for combat bravery.

Squadron members deployed to the region took part in 190 joint service and coalition missions, and worked with the United Nations to provide food and supplies to over 40,000 internally displaced persons, the statement said. They were awarded three Bronze Stars and an undisclosed number of Air Force and Army commendation medals.

In Africa, a 12-person flight helped build counterterrorism capabilities with allied countries in the continent’s northwest and east regions, including training Kenyan military personnel to fight the al-Shabab terror group. The statement did not say what awards they earned.

“We partnered with key allies in Mali and Kenya, establishing new partnerships to integrate airpower into the ground scheme of maneuver ... things no other [special operations force] can do out there,” Harvey said, as quoted in the statement.

Harvey congratulated the recipients and thanked them for “being men and women of action.” Though they might have preferred to receive their awards in private, he said, there was a reason to honor them more publicly.

“It’s important for you, because you need to understand that we know what you do and what you sacrifice,” Harvey said.