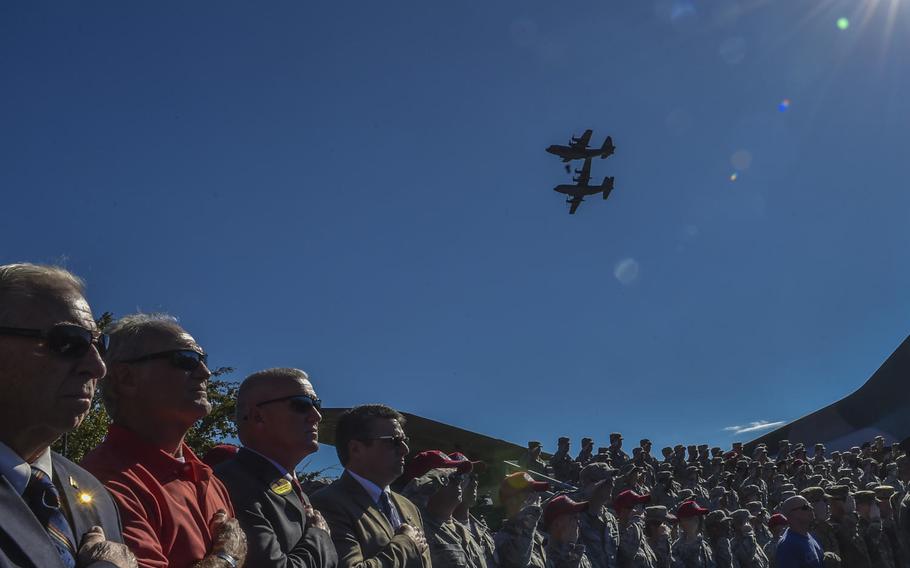 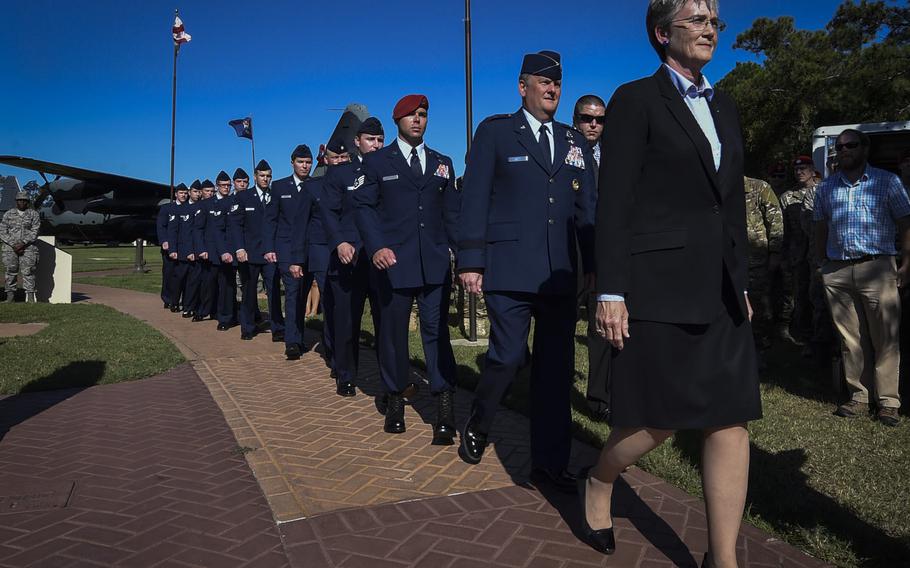 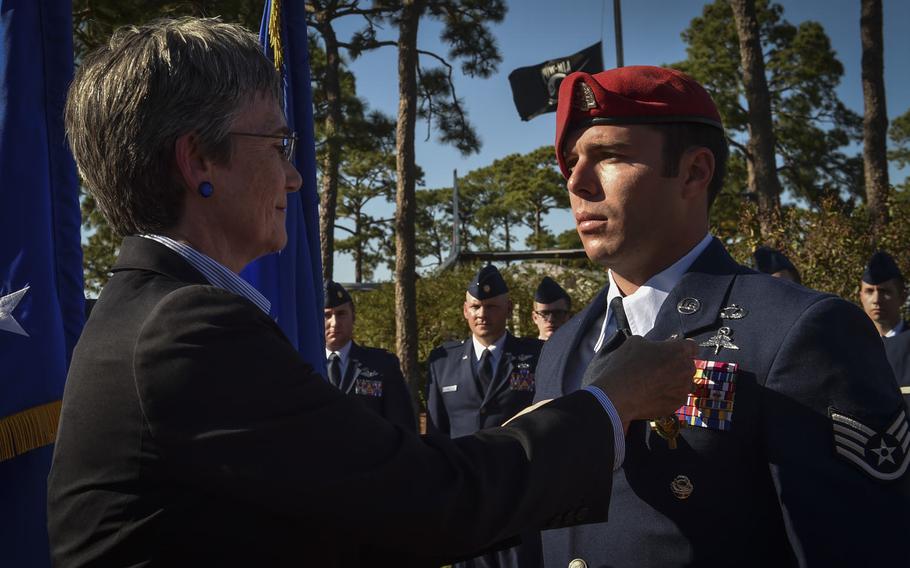 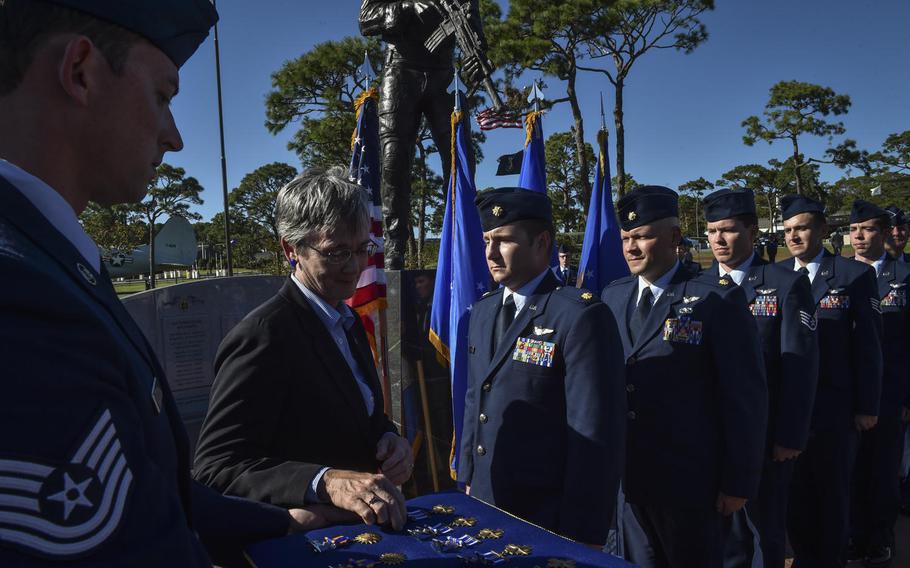 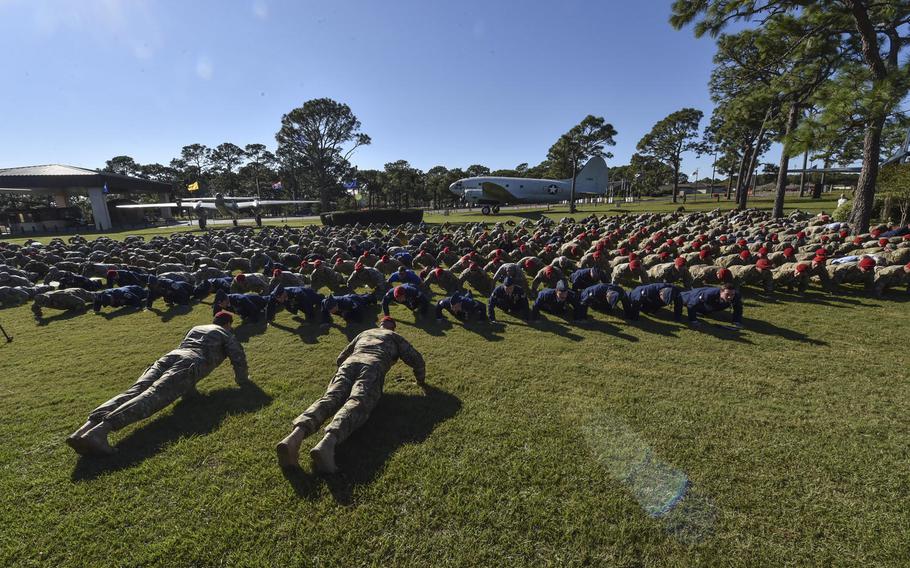 Outnumbered and nearly surrounded, the U.S.-Afghan commando team came under heavy fire. Taliban fighters, armed with heavy machine guns and grenades in elevated positions, had caught them in a narrow alley.

“We found ourselves in a three-way ambush, 270-degrees all around us,” said Staff Sgt. Richard Hunter, a combat controller with the 23rd Special Tactics Squadron embedded with the team.

The battle in a village outside the northern Afghan city of Kunduz would prove fatal to two Green Berets, but Hunter and a 14-member aircrew of an AC-130U gunship, circling above and raining down ordnance, would be credited with saving dozens of lives.

On Tuesday, Air Force Secretary Heather Wilson awarded Hunter the Air Force Cross, the service’s highest medal, for his gallantry under enemy fire. During the November 2016 battle, he repeatedly braved enemy fire, using his body to protect his teammates while directing dozens of airstrikes and coordinating medical evacuations.

Launched on Nov. 2, 2016, the joint U.S.-Afghan ground assault had been aimed at killing or capturing Taliban leaders at a compound outside Kunduz, Afghan officials said in the days after the battle.

Kunduz, the country’s fifth-largest city, had fallen to the Taliban briefly in October 2015 and had nearly been overrun a year later, but both times had been beaten back with the help of US airstrikes guided by Special Forces troops on the ground.

Hoping to disrupt insurgent plans for yet another offensive there, the commandos advanced on the house of Taliban leader Mullah Zia-ur-Rahman but quickly met with heavy resistance. Friendly forces suffered 16 casualties in the opening moments of the firefight.

The ensuing two-hour battle “proved to be the ultimate test of our air commandos in air-to-ground integration on the battlefield,” said Lt. Gen. Brad Webb, Air Force Special Operations Command, in a statement. “Hunter and Spooky 43’s precision strike capabilities were pushed to the limits under extreme fire.”

As Taliban fighters converged on the team, Hunter directed “danger close” strikes within 10 yards of the severely injured troops, allowing the Special Forces to clear their casualties from the kill zone and begin treating them.

The AC-130U, armed with 40 and 105 mm cannons and a 25 mm Gatling gun, was hitting targets so close the team was blasted with dirt as they moved further into the village.

Hunter’s team moved into the narrow alley but found themselves trapped.

“We came across a large, metal gate,” Hunter said. “Twelve-feet tall, about a quarter-inch-thick steel, a pretty massive piece of metal in front of us.”

Enemy machine gun and grenade fire wounded four soldiers, but Hunter charged through the barrage to shield them with his body while calling in suppressing fire, according to Air Force accounts of the battle.

As a Special Tactics airman, Hunter is part of the most decorated unit in the Air Force. Airmen like him often embed with Navy SEALS, Army Green Berets and Rangers to call in precision airstrikes, provide medical aid or recover battlefield wounded.

Guided by Hunter, the AC-130U in the air above fired so hot and heavy with the 105 mm Howitzer that they risked an explosion inside the aircraft. They continued firing on enemy positions with the 40 mm cannon, despite weapons malfunctions.

As the aircrew helped Hunter move his team through the thick smoke engulfing the village, he again faced enemy fire as he rushed to the aid of the ground-force commander, who was mortally wounded. He called in a Quick Reaction Force and helicopter ambulance, then helped two peers clear a building to use as temporary cover from enemy fire.

Amid the mayhem, he heard a call for help and saw a heavily wounded colleague pinned down in the open. Back into the kill zone Hunter went, leading a fire team. He directed airstrikes with a radio in one hand and dragged the wounded soldier with the other.

“At this point ... we’re using all of our weapons on the aircraft to destroy fighting positions and buildings,” said Hill, the aircraft commander. “We told Hunter to put his head down, and we fired closer than I think anyone’s ever fired an airburst round.”

Normally reserved for use against enemy troops in the open, hundreds of meters from friendly troops, the airburst fused round detonated 12 yards from Hunter’s team, killing the insurgents with a single shot, the Air Force said.

All told, Hunter called in 31 danger close engagements from the AC-130 and an AH-64 helicopter, including one strike within 10 feet of friendly forces, killing a total of 27 Taliban fighters.

The 14-member Spooky 43 crew, credited with saving 50 lives that night, was recognized with the service’s MacKay Trophy.

“What was truly extraordinary when I read this story was the amazing precision and professionalism of the team,” Wilson said in a statement. “When we need swift, precise violence, we call them.”

Zia-ur-Rahman and Taliban leaders Mullah Mansour, Mullah Ahmadyar and Qari Bilal were killed in the raid, Afghan officials said at the time, as were several of Zia-ur-Rahman’s family members.

Local officials claimed two dozen civilians had also been killed. NATO officials contacted Wednesday could not immediately provide an update on the findings of an investigation into the casualty claims.

Capt. Andrew D. Byers, 30, of Rolesville, N.C., and Sgt. 1st Class Ryan A. Gloyer, 34, of Greenville, Pa., were killed in the battle and were posthumously awarded Bronze Star and Purple Heart medals. Four other U.S. servicemembers were injured.