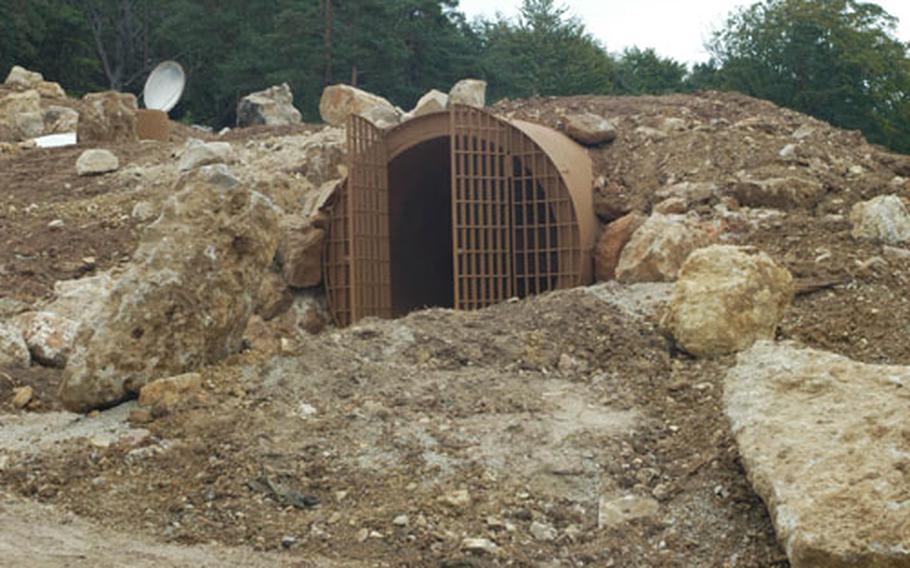 The Combat Maneuver Training Center’s Schwend cave sits in a former rock quarry in the massive training area in Hohenfels, Germany. Metal gates on the entrance keep wildlife out of the caves, which soldiers use to practice cave-clearing skills. (Rick Emert / S&S)

The center&#8217;s staff constructed four caves up to 100 feet long. Planning began in June, and construction on all four caves was complete by Sept. 15.

The center continuously works to improve its training facilities. That includes its urban warfare training villages, where soldier and civilian role-players from the 1st Battalion, 4th Infantry Regiment at Hohenfels buy furniture and other items at garage sales and flea markets to add to the authenticity, said Lt. Col. Darin Blancett, deputy operations officer for CMTC Command Group.

While the urban training sites replicate villages in theaters such as Afghanistan, operating in an urban environment is not the only concern.

&#8220;USAREUR has been deployed to locations like [Afghanistan], and [U.S. Army Europe commander] Gen. [B.B.] Bell directed that we replicate these environments &#8212; not specifically for Operation Enduring Freedom, but for any location where soldiers may need cave-clearing skills,&#8221; Blancett said.

Although the center based its caves somewhat on the model of manmade caves at the National Training Center in Fort Irwin, Calif., the caves in Hohenfels are much more elaborate. The design had to be tweaked to match the terrain and climate of Hohenfels.

At a cost of $541,000, the caves were made with pieces of 5-inch-thick concrete sewage pipe that range in diameter from about 5 feet to 6 feet, according to Knut Ogaard, master planner for the center who came up with the original design of the caves.

The insides of the caves were painted in earth tones with a stucco effect that creates a texture similar to natural cave walls, Blancett said.

Numerous escape hatches with manhole covers were built into the caves to provide easy exit access for soldiers in case of an emergency, Ogaard said.

The caves twist and turn with several openings inside the caves that lead to dead ends.

&#8220;We put in dividers, because natural caves are not a straight shot; you have to maneuver around in them,&#8221; Ogaard said. &#8220;The dividers help with the training because someone could be hiding behind one of them.&#8221;

Opposing forces will likely be hiding in the caves and stockpiling weapons that units must find as part of the cave-clearing training, Blancett said.

A company from the 173rd Airborne used the caves for training on Monday, said Sgt. 1st Class Eric Volk, an observer-controller from the training area.

&#8220;They can use any means available to provide light in the cave,&#8221; Volk said. &#8220;Some will use flashlights, others use [night-vision goggles]. They may want to limit the number of flashlights they use in case an enemy is waiting for them inside the cave.&#8221;

Volk added that observing the trainees in the cave is no more difficult than observing their training in the buildings and on the streets of the mock villages.

&#8220;One observer will already be in the cave, and another follows the soldiers in to observe how they enter the cave,&#8221; Volk said.

For units such as the 173rd Airborne Brigade, which deploys to Afghanistan next spring, the manmade caves in the training area could save lives.

&#8220;It is better that they practice clearing a cave here under these conditions than encounter it for the first time downrange,&#8221; Blancett said.