Special pays would be first casualty of delayed defense bill 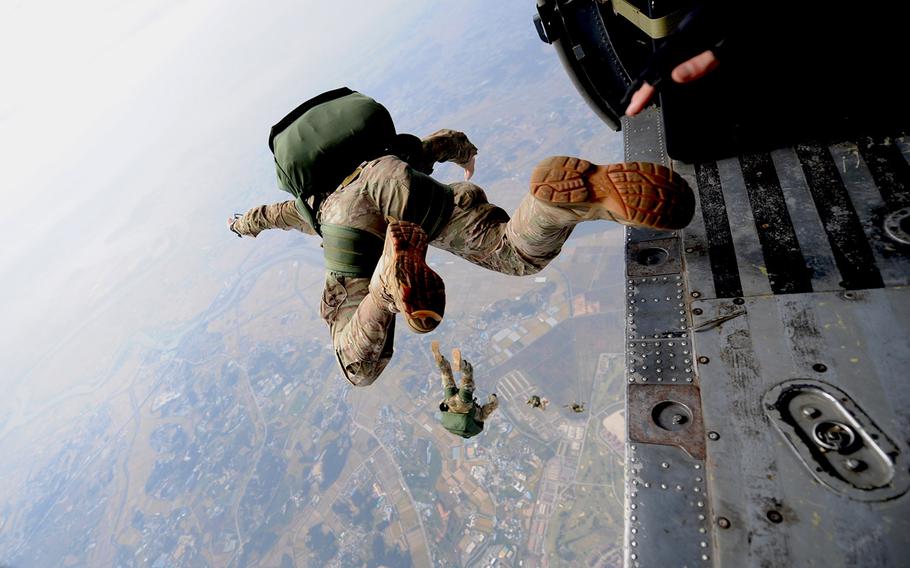 A pararescueman from the 31st Rescue Squadron freefalls with a parachute after jumping from a 33rd Rescue Squadron HH-60 Pave Hawk during training scenarios for PAIFIC THUNDER 2012 at Osan Air Base, South Korea, on Oct. 12, 2012. (Sara Csurilla/Courtesy of U.S. Air Force)

A pararescueman from the 31st Rescue Squadron freefalls with a parachute after jumping from a 33rd Rescue Squadron HH-60 Pave Hawk during training scenarios for PAIFIC THUNDER 2012 at Osan Air Base, South Korea, on Oct. 12, 2012. (Sara Csurilla/Courtesy of U.S. Air Force) 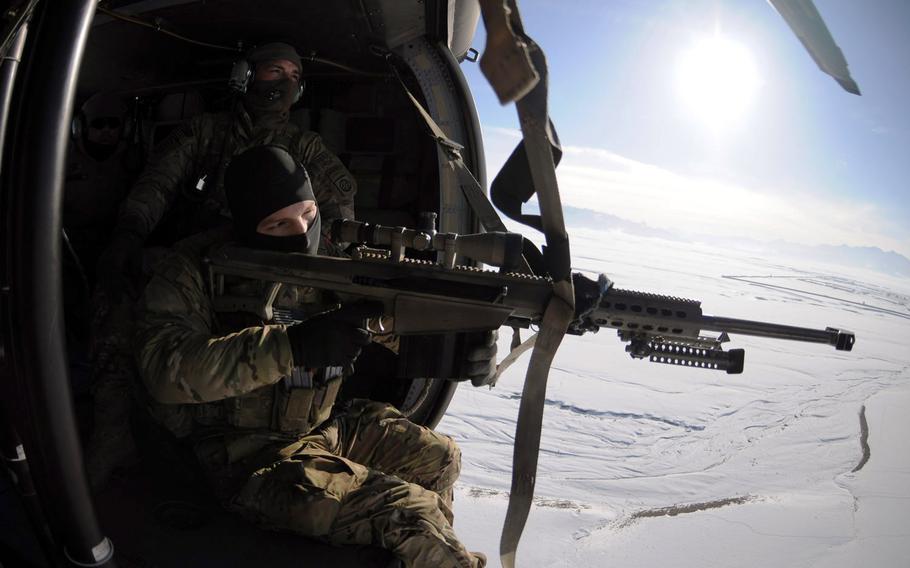 Cpl. William Hopkins looks through the scope of the Barrett .50 Cal. while Sgt. Lucas Cordes, a sniper team leader with Co. F, 282 CAB, waits for the Uh-60 Blackhawk to turn around so they can commence an aerial firing platform exercise Jan. 26. (Cody Barber/Courtesy of the U.S. Army) 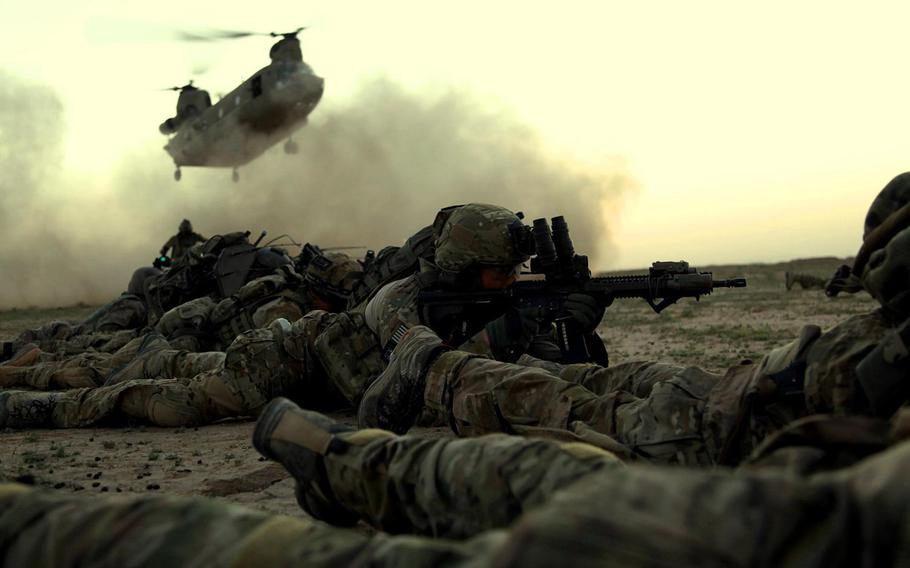 In this file photo from November 2013, Rangers from 1st Battalion, 75th Ranger Regiment, as part of a combined Afghan and coalition security force operating in Ghazni province, Afghanistan, await a CH-47 for extraction. (Pedro Amador/Courtesy of the U.S. Army) 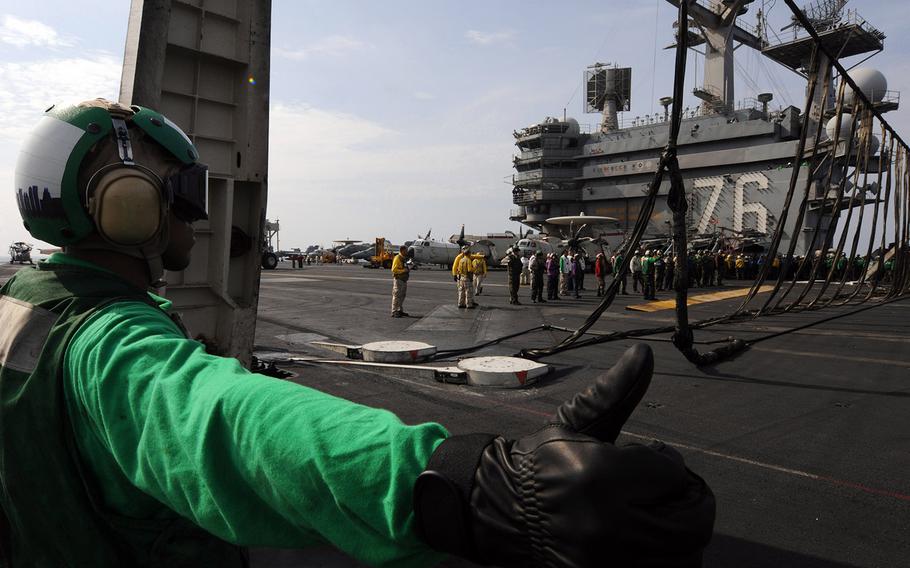 The Senate adjourned late last Thursday for a two-week Thanksgiving vacation after spending just four days debating the 2014 National Defense Authorization Act — and the 350 amendments to it still being considered. They won’t return until Dec. 9, leaving only a handful of session days to debate amendments, pass the bill, and negotiate any differences with the House, which passed its version of the NDAA back in June.

That creates an increasingly likely scenario in which special pay provisions will be eliminated on Dec. 31, if no defense bill is passed. That hasn’t happened in 51 years, but the political atmosphere in the capital is particularly poisonous.

Party leaders last week tried to whittle down the list of amendments, but many, such as those affecting sex crime prosecutions in the military, and new economic sanctions against Iran, were controversial. Majority Leader Harry Reid, D-Nev., and Armed Services Committee Chairman Carl Levin, D-Mich., had pleaded with senators to finish the defense bill in time to get it to House-Senate budget conferees by Dec. 13, the conferees’ deadline to come up with a new federal budget.

With just five working days on the Senate’s long-range planning schedule — Dec. 9 to Dec. 13 — passage is unlikely, though the Senate could extend its schedule, and a breakthrough is still possible.

In a floor speech shortly before the Senate adjourned, Levin warned of the consequences:

“After that date, we will have troops in combat who will not get combat pay. We will lose some of our most highly skilled men and women with specialties that we vitally need. Not only will we be shortchanging our soldiers, airmen and Marines, we will be denying our (ability) to achieve the force shaping objectives as they draw down their end strengths.”

The 1 percent pay raise for the military would not be affected by the lack of a 2014 defense bill; a federal law will automatically implement that, since it was President Barack Obama’s recommendation on base pay.

“Special pay” can add thousands of dollars per year to a servicemember’s base pay. Soldiers who serve in hardship areas can earn up to $150 per month, while someone with specialized, critical foreign language skills can receive up to $1,000 per month. Duties with special risks, such as diving, parachuting or flight deck duty, also carry special bonuses, as does duty exposed to hostile fire or imminent danger.

The Pentagon has identified 26 specific special pay provisions that will be eliminated after Dec. 31, if no defense bill is passed. DOD Spokesman Bill Urban said there is no contingency program to cope with the cuts because officials have no spending authority to do so without a new NDAA.

Joyce Raezer, executive director of the National Military Family Association, said the loss of special pay would be significant for several reasons.

“It’s a big deal. This is pay over and above what these men and women are doing in their normal military jobs. It’s based on where they are, the skills they have,” Raezer said. “We’re always talking about how do we recruit the best people? Well, the best way not to do that is to devalue the skills they bring to the military, and by not paying those pays, you’re sending that message, that their services aren’t of value. That’s the message our leaders are sending.”

But beyond the simple loss of pay, Raezer said such a situation hits families back home as well.

“Families build budgets, and the nice thing about military pay is by nature, it’s predictable. You know what’s coming and how its going to change if someone is deployed, and you can build budgets based on that,” she said. “So you pull that piece out of a familiy’s budget, and now you have families going from the financial edge into financial crisis. Why would we do that?”