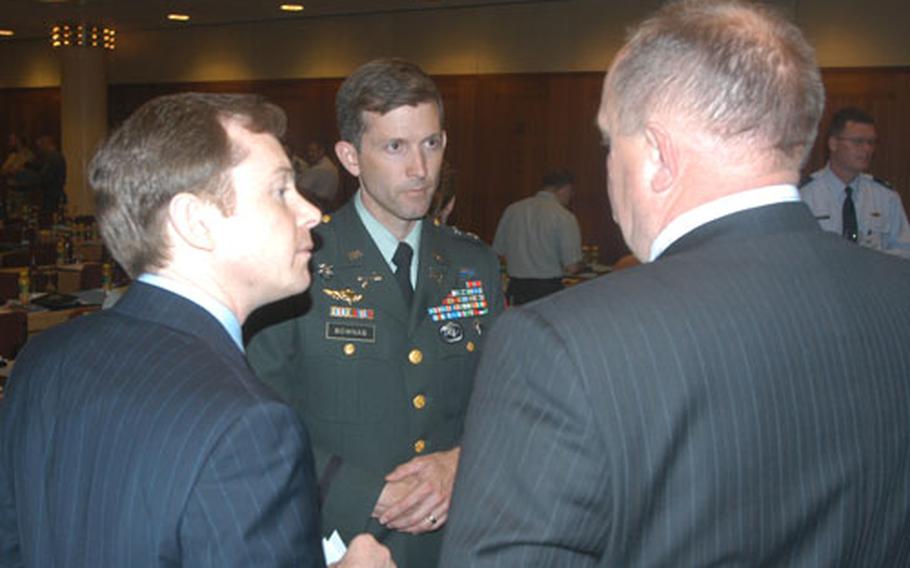 STUTTGART, Germany &#8212; It&#8217;s fine to go into poor countries and inoculate livestock, dig wells and hand out notebooks and pencils. But those are just band-aid cures until national militaries can protect citizens and control enemies, attendees were told last week at the International Special Operations Forces Conference.

&#8220;So how can we work together to make that happen? The solution has to start with security somehow.&#8221;

About 200 special operations troops and officials from 40 nations were being urged to ante-up however they could in the fight against terrorism.

Bownas, the chief of Europe Policy and Planning for U.S. Special Operations Command Europe, and others also hoped that the Pentagon and Congress would facilitate more &#8220;peace operations&#8221; in Africa, Eastern Europe and other locales considered unstable.

The U.S. military in recent years has emphasized working with other nations. The same call was made at the conference.

&#8220;There are many countries in the world who have more special operations forces (at home) than they need,&#8221; Bownas said.

He suggested that some countries deploy more of their crack military troops to poorer countries to train and make friends, instead of having them stay at home to protect, say, Sweden.

Bownas said that countries should not be seen as imperialist when they deploy troops to places such as Africa and Eastern Europe, if those troops are not forcing a different way-of-life upon people and if their activities are above board.

European nations, Bownas said, should be interested in stopping bombs before they arrive in Europe.

Jakub Urbanik of Poland&#8217;s Security Policy Department praised the conference but warned against too much military-to-military work between countries and not enough in other areas.

&#8220;If you support too much on the military side of governments, this can lead to abuse (by those militaries),&#8221; Urbanik said.

For some, such as Col. Yuri Servetnik, chief of Ukraine&#8217;s Special Operations Forces Section, it was a chance to talk shop with colleagues who have similar challenges.

&#8220;The fact that so many high-ranking guys in our field collected in one place is a most significant point,&#8221; Servetnik said.

According to some, one of the biggest problems facing the U.S. military and its desire to become fast, flexible and responsive is a money flow for phase-zero operations that is slow, inflexible and unresponsive.

Military training and medical missions by U.S. troops in Africa, for example, are paid for by money that is approved well in advance and comes with strings attached, according to John Gerlaugh, assistant secretary of defense, director of counterterrorism operations policy.

&#8220;[Special operations commands] need walking-around money to be used immediately, and not take one year to craft legislation for it.&#8221;