Special operators say African terror groups a future threat to US, if not right now 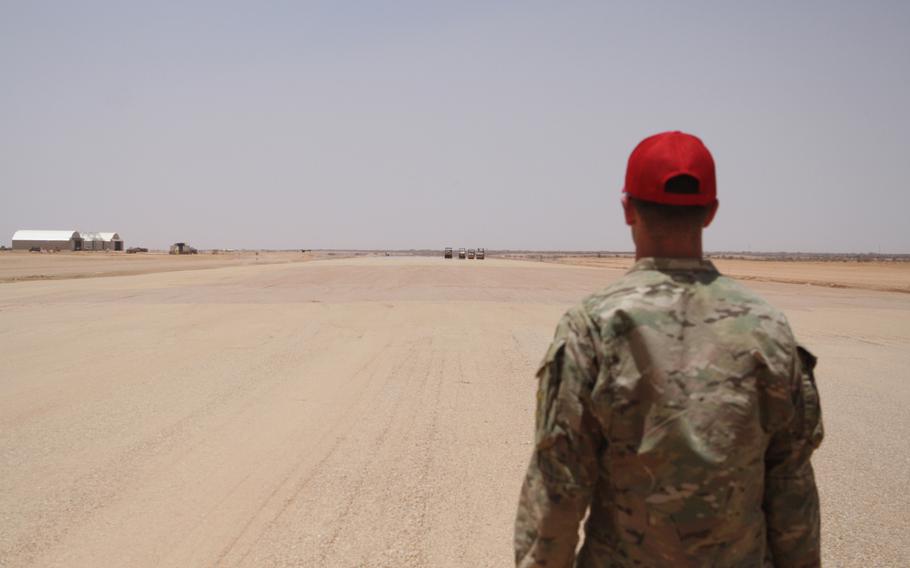 U.S. Air Force Capt. Tim Lord looks out at the runway being built in Agadez, Niger, where the Air Force is nearing completion of its largest construction project ever. The runway, to be used by drones and other aircraft, is more than a mile long. (John Vandiver/Stars and Stripes)

U.S. Air Force Capt. Tim Lord looks out at the runway being built in Agadez, Niger, where the Air Force is nearing completion of its largest construction project ever. The runway, to be used by drones and other aircraft, is more than a mile long. (John Vandiver/Stars and Stripes) 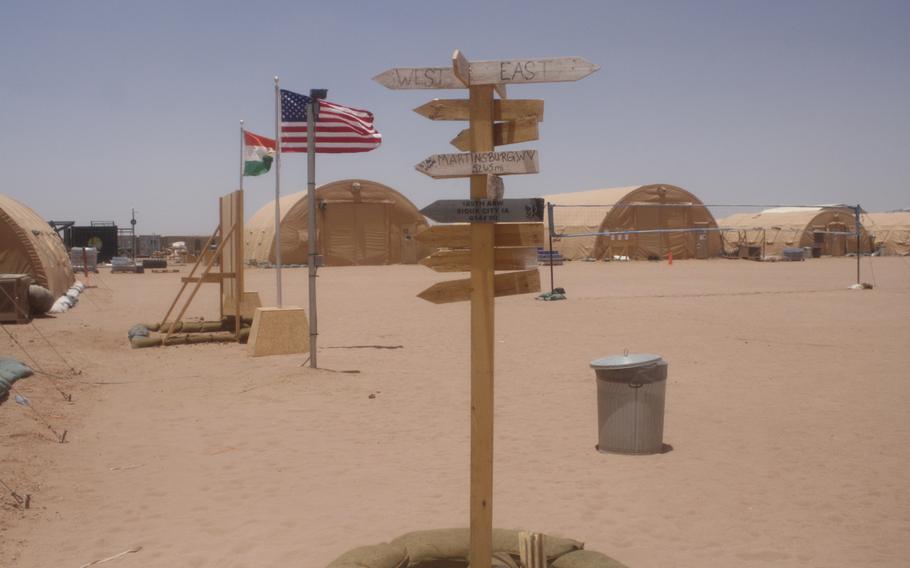 The 100-plus degree heat in Agadez, Niger, means most airmen stay inside air-conditioned tents during peak times. (John Vandiver/Stars and Stripes) Troops patrol the perimeter of a Nigerien air base in Agadez, part of which is under the exclusive control of U.S. forces. The site will be a hub for American surveillance operations in the region. (John Vandiver/Stars and Stripes)

AGADEZ, Niger — The runway under construction here, stretching more than a mile in the southern Sahara Desert, is both the Air Force’s biggest building project ever and the newest sign of a growing American military campaign against extremists in West Africa.

At Air Base 201, U.S. airmen put down damp burlap sacks to keep fresh concrete from cracking under the blaze, while building a home for MQ-9 Reaper drones.

The U.S. is bolstering air operations at a time when the costs of its Africa strategy have grown clearer: five American servicemembers were killed in combat operations during the past year in Africa, the first such deaths in a generation.

It raises the question: Does the threat posed by any extremist group in Africa justify U.S. forces being thrust into harm’s way?

As the Pentagon has dedicated more resources to counterterrorism efforts in Africa, there are conflicting views among security analysts about the broader threat and whether it’s as significant as the U.S. military sees it.

“I think we can be smarter about what we are doing and doubling down on a military investment isn’t really a smart long-term strategy,” said Steven Feldstein, a former State Department official for Africa and analyst at the Carnegie Endowment for International Peace. “Is $100 million for a drone base in Agadez the smartest way to approach the issue?”

U.S. military leaders acknowledge that none of the major extremist groups — Al-Shabab in Somalia and a mix of Islamic State and al-Qaida affiliates elsewhere — constitute a major threat to the U.S. today. But commanders argue that they could if their activities go unchecked.

“If there isn’t something done to assist the countries across the Sahel region, it is going to become a very real threat,” said Col. Brad Moses, commander of the 3rd Special Operations Group, which handles missions in 11 West African countries. “Twenty years from now they will be an existential threat if we don’t assist our partner forces now.”

The rationale for the military’s expanding mission in places like Somalia and Niger and a $110 million base in Agadez — that a threat to the homeland looms in the not-so-distant future — has generally been accepted in Washington.

Terrorism’s ebb and flow Moses’ assessment echoes what top military leaders have been saying since U.S. Africa Command was launched a decade ago. Gen. William E. Ward, who stood AFRICOM up in 2007, to Gen. Thomas Waldhauser today, all have said the same thing — that extremists on the African continent aspire to attack America. When four soldiers were killed in an October ambush in Niger, lawmakers were surprised by the risk troops face, but not necessarily the underlying logic that drives the missions.

The data gives a mixed picture about how terrorism is evolving in Africa.

In 2017, there was a nearly 50 percent decline in fatalities, with 10,376 deaths caused by Islamic militant groups in Africa compared with 18,728 in 2015, according to the U.S. government-affiliated African Center for Strategic Studies.

Much of the drop-off is attributed to few attacks by the Nigeria-based Boko Haram group, which a few years ago was the most lethal of all African terrorist groups. Boko Haram has expressed little interest and demonstrated no capability in operating outside the region.

However, Al-Qaida aligned groups have proved resilient in West Africa. They caused 391 deaths last year, nearly double 2016’s fatalities, according to ACSS. The increase is blamed on the emergence of a new jihadi umbrella group known as Jama’at Nusrat al Islam wal Muslimin, or JNIM.

In March, al-Qaida claimed responsibility for an attack on an Army base in Burkina Faso and the French embassy there, which caught the attention of U.S. Special Operations Command Africa boss Maj. Gen. Marcus Hicks. The attacks marked a shift from mainly civilian-populated areas to hard targets.

“They (al-Qaida linked groups) have been building capability and capacity since 2012,” Hicks said during a recent stop in Niger to observe his command’s Flintlock exercise, the largest special operations war game on the Continent.

For Hicks, the military’s investment now in places like Niger equals preventive medicine.

“This is exactly the time and exactly the place to address these threats,” Hicks said in an interview. “If we don’t deal with it here at a cost that is affordable, we will end up dealing with it somewhere else at a much higher cost.”

The risk of not acting Feldstein says more skepticism is needed when considering aspirational rhetoric from extremists and what they are actually capable of achieving. But to argue against the idea that the militant groups in Africa could evolve into the al-Qaida of Osama Bin Laden is to take on risk.

“If you are the person who basically says I don’t think this threat is that serious and something happens, no matter how small, that can be used against you,” Feldstein said. “It is always to your political advantage to be very serious about threats.”

In Africa, the costs have been high for U.S. special operations forces. In May, SEAL Senior Chief Petty Officer Kyle Milliken was killed in combat in Somalia.

“It’s a complex environment just like any other place we work in,” said Capt. Neal, a Green Beret with the 3rd Special Forces Group who recently advised Nigerien troops during the Flintlock exercise.

Neal, whose last name was withheld for security reasons, declined to comment on the ambush in Niger. But when asked whether it was worth taking on risks in countries like Niger where the threats to the U.S. are vague, he said it was.

“Any time you can go there and improve someone’s quality of life and security situation, it is worth it,” he said.