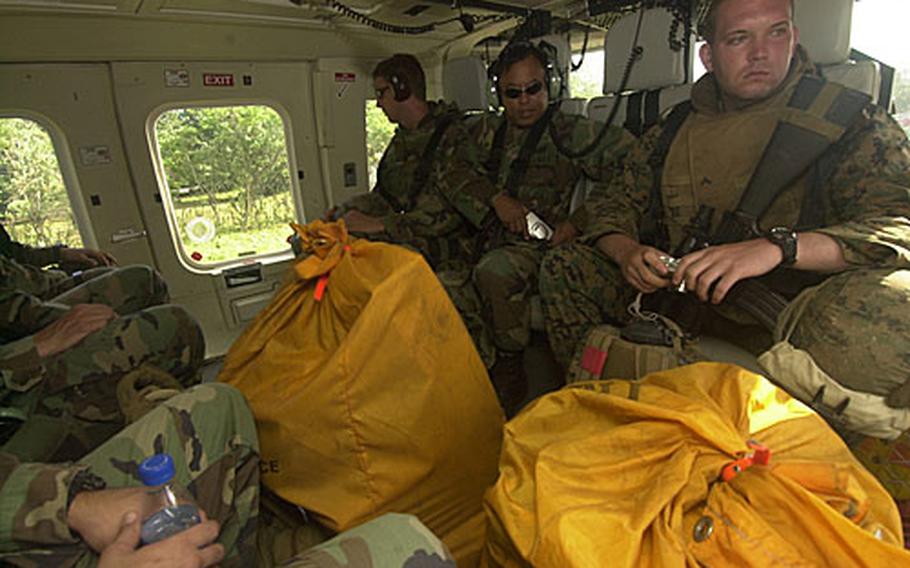 Joint Special Operations Task Force-Philippines troops load into a helicopter along with bags of mail on a trip from Advance Operating Base-920 on Jolo Island to an outlying "team house." (T.D. Flack / S&S)

Joint Special Operations Task Force-Philippines troops load into a helicopter along with bags of mail on a trip from Advance Operating Base-920 on Jolo Island to an outlying "team house." (T.D. Flack / S&S) 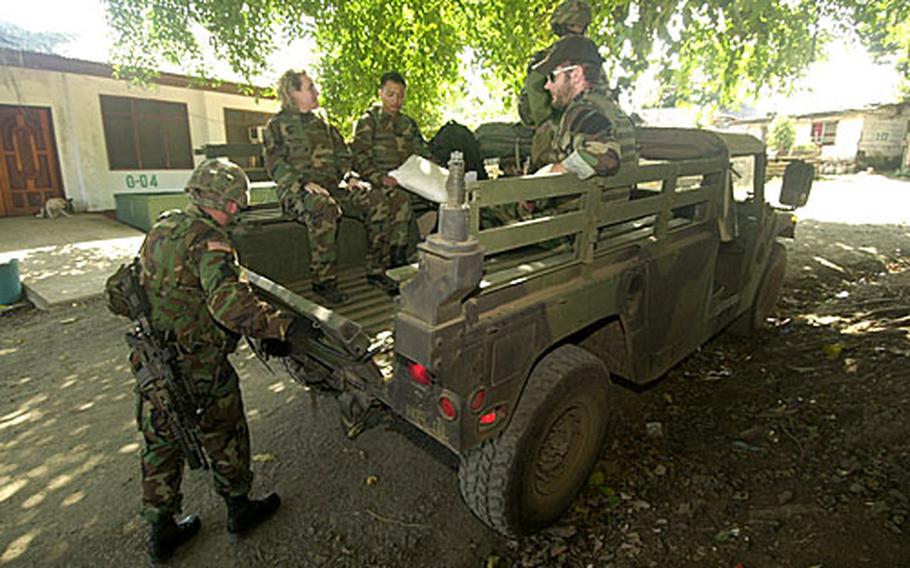 Joint Special Operations Task Force-Philippines troops load up for a quick convoy to the airfield from Advance Operating Base 920 on Jolo Island. (T.D. Flack / S&S)

CAMP NAVARRO, Philippines &#8212; The commander of the Joint Special Operations Task Forces-Philippines said the recent killing of a senior terrorist illustrates the U.S. military mission in the country.

U.S. special operations troops did not kill Abu Solaiman, a senior member of the Abu Sayyaf Group, but they were instrumental in the mission, said Army Col. David Maxwell.

Maxwell, at his headquarters on Mindanao Island, told of a young U.S. sergeant who received an intelligence report, realized it was &#8220;actionable intelligence&#8221; and immediately sent it to the Philippine military.

They tasked a group that had just finished training with some of Maxwell&#8217;s forces. Following an all-night march through a rainy jungle, the Philippine forces attacked at dawn, killing Solaiman.

Just another day in the U.S. military mission of stomping out terrorism and the conditions that spawn it in the Philippines, according to Maxwell.

U.S. special operations troops for five years have been &#8220;advising and assisting&#8221; the Philippine armed forces in a region famed for tough terrain, an overall sense of lawlessness and a population that distrusts the government.

&#8220;JSOTF-P, in coordination with the U.S. country team, builds capacity and strengthens the Republic of Philippines security forces to defeat selected terrorist organizations in order to protect U.S. citizens and interests from terrorist attack while preserving&#8221; Philippine sovereignty, Maxwell said.

He said the mission is challenging for the special operations Marines, sailors, soldiers and airmen working for him.

The 8,000 square miles in the southernmost area of the Philippines that make up the JSOTF-P area of operation is home to al-Qaida-linked terrorist groups, separatists and a communist threat. Both Abu Sayyaf and Jemaah Islamiyah are linked to al-Qaida, according to Maxwell.

The task force is focused on those groups, but &#8220;most importantly, helping address the conditions that give rise to terrorism,&#8221; Maxwell said.

He said there are four steps to fighting insurgents: deny sanctuary; deny mobility; deny access to resources; and separate them from the local population.

In recent months, Philippine forces have killed some of the top Abu Sayyaf &#8220;high-value targets.&#8221;

Maxwell called the JSOTF-P work a model of supporting an ally in the war on terror.

Maxwell added that it&#8217;s in both nations&#8217; interest to eradicate terrorism in the Philippines.

&#8220;We do bring some capabilities here that are useful in the war on terrorism,&#8221; he said of the intelligence aspect. &#8220;We partner with the Philippine military and security forces to fuse our intelligence together &#8212; theirs and ours. Analyze it, assess it, turn it into actionable intelligence, which again, leads to successful operations.&#8221;

He also said working with the local populations is paying off.

Last year, he said, two teens spotted something suspicious in the road and alerted the Philippine military.

&#8220;And it was very timely because an hour later a Philippine and U.S. convoy was going to drive down that road&#8221; headed to a medical clinic, he said.