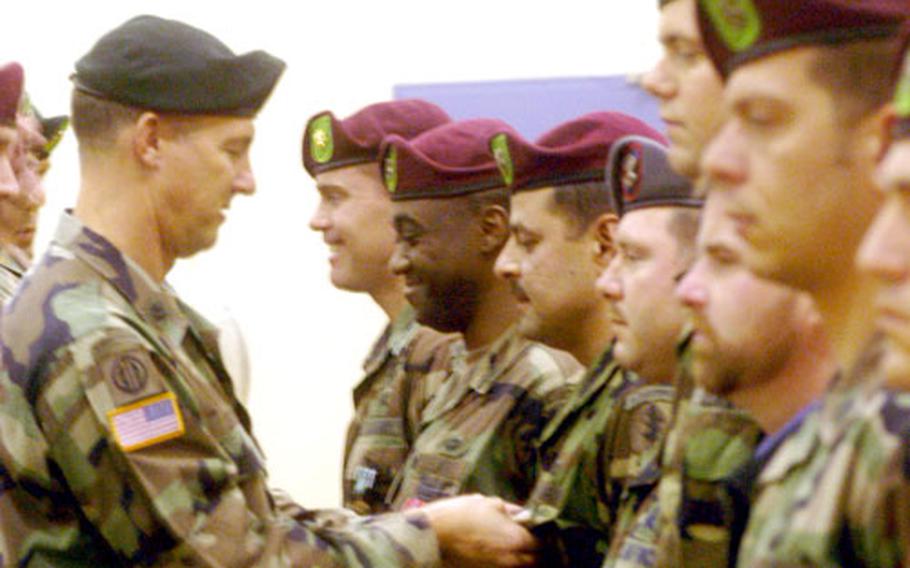 During their eight-month tour, soldiers from Company A, 1st Battalion, 10th Special Forces Group got shot at, mortared and bombed. They got their share of enemy fighters, too, while operating in Anbar province, and trained up Iraqi troops to defend Baghdad.

On Friday, the soldiers got their medals. About 45 soldiers received the awards during a short ceremony at the Panzer Casern gymnasium as a small contingent of family and friends looked on.

Some got Bronze Stars, while others got Army Commendation Medals or Combat Action Badges.

The tour in Iraq was the company&#8217;s first but likely won&#8217;t be its last. To go through a tour and succeed at missions was validation that the soldiers&#8217; years of training paid off, according to Maj. Gen. Thomas Csrnko, commander of U.S. Special Operation Command Europe.

The Special Forces soldiers said they worked closely with Marines and regular Army soldiers. On one occasion in Haditha, ODA 014 was working with a Marine unit. The units were about a mile apart, and both got ambushed but managed to fight their way out.

After taking out the enemy fighters, the ODA pushed into the hide-out of their primary target, an insurgent leader who had bragged that the city was ringed and that there was no chance he could be captured, according to Hugo, a chief warrant officer 2 and the ODA&#8217;s assistant commander.

After undertaking operations in Anbar province, the company moved to Baghdad where they trained Iraqi soldiers. Those brigades are now standing alone and holding their ground, the soldiers said.

And when the company pulled out of Iraq in June, the soldiers were happy they didn&#8217;t lose a single soldier. But some sounded like they were sorry to leave.